There was a time, my friends, when Bachelor fans would actually look forward to the Women Tell All special, back when it was just a relatively jam-packed hour, and didn’t include a fifteen-minute in-show advertisement for its trashy cousin, Bachelor Pad. Viewers of last night’s special were right to feel cheated by the stretched-out show, which was all about Courtney but showed us almost nothing about her we didn’t already know — except possibly a hint that she and Ben are not together. Here are the highlights:

Chris Harrison excitedly announces, “In what is probably a first for this show, one of the final two will be here. Courtney will be here tonight to defend herself.” The crowd, seemingly not puzzled by Harrison’s inability to research his own show, titters with glee. “I love Courtney,” one audience member is seen mouthing to another. They are more excited about Courtney than Ben, because, even though we won’t see Courtney for the length of an entire motion picture, this is still her show.

There is the aforementioned Bachelor Pad promo, disguised as an inside look into one of the many Bachelor franchise reunions. This one takes place in Vegas, but has its cool factor significantly upped by the presence of former Bachelorette Ali Fedotowsky. One of the former contestants whose sad life revolves around these reunions says of Ali, “She wasn’t looking her best.” Which is bullshit. Over-reliance on sequins aside, Ali always looks great. 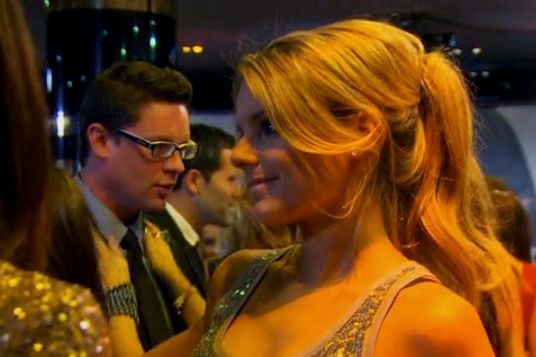 Next, the women talk shit about Courtney, taking short detours to briefly chastise Blakeley and her self-described chest “blessings” and dragging interloper Shawntel up to defend calling her hippy, for almost two hours. Nobody really says anything new, though Samantha emerges as the most annoying contestant in recent history, constantly breaking in with her panicked, snippy commentary even though nobody even remembers her being on the show.

Emily the doctor cements her place as House Mother and official leader of the Ben’s Season girls — the camera constantly cuts to her for reactions and the other women look to her to speak for them. It’s clear that this franchise isn’t done with the epidemiology student, but I do hope she continues her education and keeps the apocalyptic ferret flu from wiping out half of the Earth.

Most recent rejects Emily, Nicki, and Kacie are brought up to watch clips of themselves falling for Ben and Ben rejecting them. We get to watch their reactions in a little box on the bottom left. This is entertaining in a Hunger Games type of way.

Finally, finally, finally, they bring out Courtney, who looks effortlessly gorgeous as usual in a comfy-looking blue silk dress. Mean Courtney is nowhere to be found, however, as this Courtney takes the attacks by the other women gracefully, and you can tell that she actually feels bad. She doesn’t stoke the Courtney-hate fire one bit, and just apologizes over and over. Twice, she mentions how her family and friends have been affected by the tabloid frenzy surrounding her, and she seems legitimately upset. Then she says one (maybe) telling thing: “I cared for Ben and I still do care for Ben.” It was an in-the-moment comment. Could the past tense mean Courtney, who has long been favored to win this competition, might have actually lost? We’ll have to wait until next week.

Oh yes, then Ben comes out and says, “welcome to my nightmare” to Chris, and diplomatically explains to some of the women why he let them go. Then, it’s time for a montage of some of the “lighter moments” from the show’s taping: outtakes like Ben getting attacked by a hummingbird on a boat, and a cow nearly trampling a camerawoman. This was the biggest mistake of this entire special, because it made every viewer think: Why can’t they make the entire show out the of the “lighter moments”?

Next week, the big finale: sweet versus sexy. If past seasons are any predictor, despite Courtney’s past tense last night, we can expect sexy to win out.

The Bachelor Recap: Isn’t Courtney Beautiful When She Cries?