Even if you’re unfamiliar with the original run of nighttime soap Dallas, it had two plot twists so notorious that they’ve got a permanent place in pop culture: the “Who shot J.R.?” cliff-hanger, and the audacious reboot of a season’s worth of plotlines when the formerly dead Patrick Duffy turned up in the shower, revealing that the entire eighth season was a yearlong dream sequence. To market its update of the series, due this June, TNT has decided to zero in on the latter twist, and the result is this cast photo of eight nearly nude people, one age 80, posing awkwardly in a group shower. We need to discuss it.

But once you get past that … well, really, there is no way to get past anything with this key art. There is simply too much. Let’s break it down. 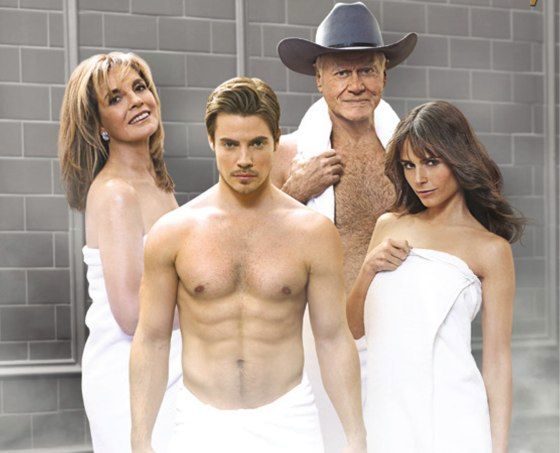 What catches your eye here first? Is it that three other people are ruining a pretty decent flyer for a Texas gay bar? Is it that Jordana Brewster has undergone a basic-cable transformation into Jennifer Love Hewitt? Or is it the fact that 80-year-old Larry Hagman is wearing nothing but two strategically placed towels and a cowboy hat? (Don’t worry, that hat is waterproof.) Are you also a little confused that Hagman has clearly been photoshopped onto someone else’s shirtless body, seeing as how Hagman — who recently underwent major surgery — looks like this with his shirt off? Are you imagining the day that the marketing firm auditioned Larry Hagman body doubles? Are you confused that they settled on someone who looked like a medium-setting manscaped Steve Carell? There is not enough steam in this steam room! Not enough, by far! 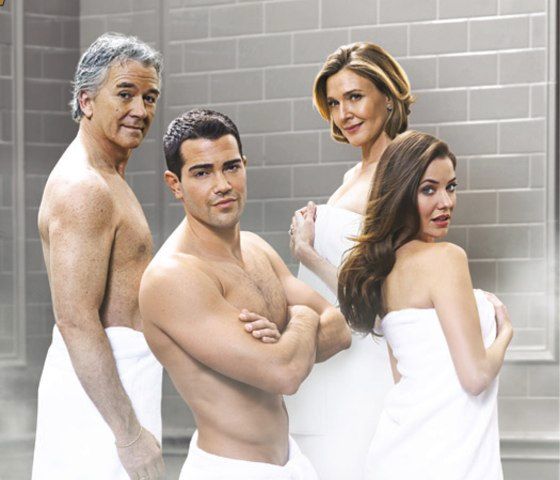 And here we have the other half of the cast photo, and a comparatively demure one at that. Apparently, Jesse Metcalfe is playing the adopted son of Patrick Duffy, and Brenda Strong is Duffy’s new wife, so it’s only quasi-incestuous that these people are one undone towel tuck away from total familial mortification. Still: um! We suppose Patrick Duffy is looking not too bad in a “Harry Hamlin on the last episode of Shameless” way, and it was also very nice of Jesse Metcalfe to cover up the girls, and when we say that, we are not referring to the actual girls to his right. But man oh man, this ad campaign. They have definitely struck something with it, and it is not oil. Discuss!

We Must Discuss the Key Art for the Dallas Remake

fire island 1:44 p.m.
Margaret Cho to Join Bowen Yang and Joel Kim Booster in Fire Island What are the odds she’s already there right now?
based on a true story 1:23 p.m.
Will Smith Is Venus and Serena’s Undeterred Father in King Richard Biopic Richard Williams raised two of the greatest athletes of all time.
casting 12:44 p.m.
Delroy Lindo Superbly Cast As a Trickster God in Anansi Boys An upcoming Amazon series from Neil Gaiman.
splits 12:10 p.m.
Kelly Clarkson Owes Brandon Blackstock Nearly $200K a Month in Divorce He reportedly wanted more than double the amount in spousal and child support.
vulture asks 12:08 p.m.
Vulture Asks: What’s Your Favorite Olympic Event? The Tokyo Olympics have been weird but let’s not forget — some of these events have always been weird.
role call 11:40 a.m.
Lesley Ann Warren Answers Every Question We Have About Clue “When it opened, we were all ravaged by disappointment. But ultimately, we got our revenge.”
By Devon Ivie
tokyo olympics 2021 10:47 a.m.
A Day-by-Day Schedule of the 2021 Tokyo Olympics Let the games begin …
bennifer 10:40 a.m.
The Complete 19-Year Timeline of the Bennifer Saga They kissed!
By Zoe Haylock
reboots 9:41 a.m.
Norman Lear Announces Mary Hartman, Mary Hartman Remake on His 99th Birthday Starring Stevie from Schitt’s Creek.
vulture sports 9:38 a.m.
The GOAT Withdraws From the Individual All-Around Competition Simone Biles made the decision to “focus on her mental health.”
hospitalizations Yesterday at 11:54 p.m.
Bob Odenkirk Hospitalized After Collapsing on Better Call Saul Set He is currently receiving medical care.
cancellations Yesterday at 10:49 p.m.
In Not-So-Wonderful News, Arthur to End in 2022 After 25 years on air.
overnights Yesterday at 10:30 p.m.
Real Housewives of New York City Recap: Nuclear Mistletoe The holidays are approaching, which means that Luann has another middling single to record and Ramona has yet another birthday to celebrate.
switched on pop Yesterday at 6:24 p.m.
Childish Gambino’s ‘Redbone’ and the Unending Relevance of ’70s Soul Yola discusses the song’s influence on her work as well as “the Mary Poppins philosophy of music.”
obits Yesterday at 5:39 p.m.
Joey Jordison, Founding Member of Slipknot, Dead at 46 The drummer’s family has asked fans to “respect our need for privacy and peace.”
the law Yesterday at 4:56 p.m.
Lynne Spears Joins Britney in Demanding Jamie’s Removal From Conservatorship In new court documents, both Lynne and Britney’s new team detail Jamie’s alleged reign of “fear and hatred” over her conservatorship.
commercials Yesterday at 4:39 p.m.
At Last, an Adam Driver You Can Truly Ride In Driver’s new Burberry campaign, horse becomes man, man becomes horse, Oscar-nominated actor becomes centaur.
rich people things Yesterday at 4:22 p.m.
Cash Rules Everything Around Martin Shkreli’s Wu-Tang Clan Album Sale (C.R.E.A.M.S.W.T.C.A.S.)
rumors Yesterday at 4:00 p.m.
Paris Hilton Denies Pregnancy Report: ‘Not Yet’ The socialite and reality star had been pursuing IVF with fiancé Carter Reum.
casting Yesterday at 3:05 p.m.
Bridgerton Bad Boy Regé-Jean Page Is Starring in a Reboot of The Saint Written by Kwame Kwei-Armah for Paramount.
More Stories