As an actor, Johnny Depp is partial to outrageous costumes and makeup, and can you blame him? Whenever the man actually resembles himself onscreen — as he did in The Tourist and The Rum Diary — the box office almost inevitably suffers. It shouldn’t be a great surprise, then, that Depp has taken the opportunity to go wild as Tonto in Gore Verbinski’s The Lone Ranger; while costuming the original TV version of Tonto was a relatively simple affair, Depp has added face paint, feathers, a big headband, what appears to be a hat made out of a dead crow, and a whole lot of necklaces. As the Ranger himself, Armie Hammer has kept any additional embroidering to a minimum — though when you’ve got posture and a face like that, who needs anything extra? Check out the first look at both characters, tweeted by Jerry Bruckheimer. 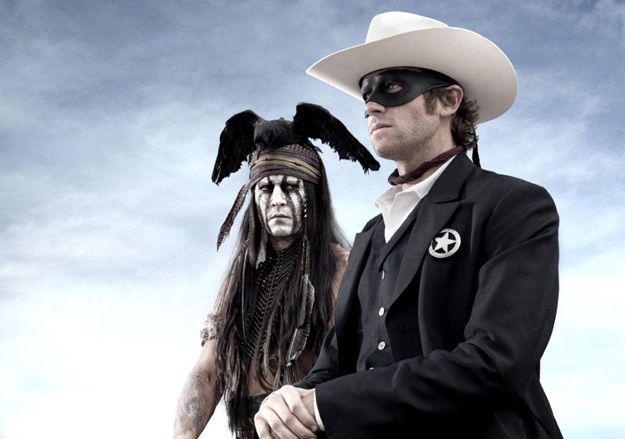 overnights 5 mins ago
Southern Charm Recap: Kiss and Yell It’s Charleston’s next-morning-brunch equivalent: everyone debriefing the previous night, hungover in their respective homes.
reflecting 9:26 p.m.
Trevor Noah Reflects on Viral Kanye West Daily Show Segment “All of us should have an opportunity at redemption.”
overnights 9:00 p.m.
Rap Sh!t Recap: #MiaCulpa Mia becomes social media’s main character.
want the world to kno-ow 6:32 p.m.
Tevin Campbell Is Ready to Come Out — Officially “Every person in the world isn’t straight. Get over it,” said the “Can We Talk” singer.
so random 6:29 p.m.
The Biggest Plot Twists in the Simon & Schuster Antitrust Trial The publishing world’s inner workings come to light.
damage control 5:57 p.m.
Brad Pitt’s Foundation Settles With Katrina Victims for $20.5 Million He and his Make it Right Foundation were sued for building poorly constructed homes after the hurricane.
media news media news 3:50 p.m.
Reliable Sources at CNN Say Reliable Sources Is Done CNN is saying good-bye to both the show and its host, Brian Stelter.
overnights 3:49 p.m.
American Horror Stories Recap: Reflection and Refraction Bloody Mary … Bloody Mary … Bloody ahh, we’re too scared to say it!
overnights 3:48 p.m.
Pretty Little Liars: Original Sin Recap: Knives Akimbo Our Final Girls are making some astounding leaps of logic.
tributes 3:30 p.m.
Ellen DeGeneres, Rosanna Arquette, and More Remember Anne Heche “This is a sad day.”
buffering 3:20 p.m.
House of Questions: All Eyes on HBO’s Dragon What’s at stake for HBO Max — and the Game of Thrones franchise — in the weeks ahead?
tragedy plus time 3:16 p.m.
Jennette McCurdy Says Her Old Ariana Grande Jealousy Is ‘Comedy Gold’ “To be on set at 21, where you’re just the most susceptible to jealousy … and I’m there across from a burgeoning pop star of the day.”
overnights 2:05 p.m.
She-Hulk: Attorney at Law Series-Premiere Recap: Better Call Walters Turns out controlling her Hulk is actually NBD for Jennifer Walters. Sorry, Bruce.
overnights 1:12 p.m.
Harley Quinn Recap: I’m Going to Become the Mayor This week’s Joker-centric spinoff is a roller coaster — at times literally.
overnights 1:05 p.m.
The Resort Recap: Long Live Luis Guzmán An author is found, and a pen is lost.
emergency discussion 1:00 p.m.
The Refreshing Profanity of This Fool Chris Estrada’s Hulu comedy series is so specific with its use of Mexican American slang. Órale!
By Alejandra Gularte and Savannah Salazar
batter up! 12:41 p.m.
Take Me Out to Make a Run for Second Base (Return to Broadway) With Jesses Tyler Ferguson and Williams back on the team.
first they came for the pjs 12:39 p.m.
Stalking Celebrity Jets Became the Internet’s Pastime Thanks to @CelebJets Kylie Jenner and Elon Musk have become main characters in the PJ universe.
vulture 10x10 12:29 p.m.
The Criminal Puzzle 13-Across, Three Letters: Do the Right Thing pizza owner.
vmas 2022 12:18 p.m.
Nicki Minaj, Jack Harlow, and LL Cool J Set to ‘Anchor’ the MTV VMAs Minaj and Harlow are set to perform along with Blackpink, Lizzo, Måneskin, and more.
More Stories