In Vulture’s most sustained bid yet for the Pulitzer Prize (they give that out for online entertainment journalism, right?), we have been tireless in our investigation of the most important character in Disney’s sci-fi epic John Carter: Woola. Audiences will get their chance to experience Woola for themselves today, but what do film critics make of the CG creature, who becomes John Carter’s best friend? In the most important edition of Woola Watch yet, we round up the greatest descriptions of the loyal Calot, and we’ve also got an important additional infographic for Woola obsessives. (Which is all of you, be honest.)

First, the newly converted Woola die-hards (Woolites?) from the press:

“I like the doglike 10-legged Martian animal known as the Woola. He is fantastic, a blobby but loyal fellow with a blue tongue (the blood of Martian critters of various species is also blue) and the ability to run several hundred miles per hour. If the film succeeds, breeders of fancy French bulldogs will get right to work on something more kinetic, like the Woola.” - Michael Phillips, Chicago Tribune

“Thankfully, there’s the pleasingly goofy creature who becomes John Carter’s de facto animal companion. He’s sort of a monster-dog hybrid: an overgrown pug with a sweet, smushy face, incredible speed and boundless enthusiasm. This gives John Carter something in common with yet another pop-culture phenomenon, The Artist: The dog is the best part.” - Christy Lemire, Associated Press

“On Mars, Carter even picks up a cute pet, kind of a giant Red Bull-infused dog, and even this element is not only not insufferable; it works.” - Glenn Kenny, MSN

“This cheeseball circus also includes a hybrid dog-lizard creature called Woola, who adopts Carter as its pet, and who looks like a canine version of Jabba the Hutt. Mostly a time waster (and toy seller), Woola at least provides some small measure of comic relief.” - Peter Howell, Toronto Star

“The film also offers a Pixarian comic lift in the planet’s doglike species, the calot. Like Carter, who is able to leap vast spaces in the lighter gravity of of Mars … his calot, Woola, gives the picture an essential dose of buoyancy.” - Richard Corliss, Time

“The special effects are some of the strongest elements here, as Stanton and his digital team convincingly render a wide variety of Martian creatures … down to the film’s primary source of comic relief, Woola, a blazingly fast creature that looks like a reptilian cross between a toad and a bulldog.” - Ian Buckwalter, NPR

“The fantastical creatures of Mars – [including] a sort of chubby half-dog, half-dinosaur that Carter adopts as a pet – are appealingly old-fashioned, like a digitally enhanced version of the stop-motion monsters Ray Harryhausen fashioned for movies like Jason and the Argonauts.” - Dana Stevens, Slate

Film criticism is a difficult job, because every viewer brings his or her own experiences to bear when watching a movie, and thus no review can truly be empirical. With that in mind, here are all the critics that are hella wrong haters when it comes to Woola:

“The creatures that Carter befriends – [including] a doglike pet with an enormous black tongue – look like they were conceived after consulting the wadded up sketches in George Lucas’s wastebasket.” - Ann Hornaday, Washington Post

“Not only is there a lack of chemistry between John Carter and his Martian princess, but between Carter and Woola, the lumpy, unfunny creature who eagerly follows him wherever he goes.” - Joe Morgenstern - Wall Street Journal

Ugh, enough of those people! Words won’t bring us down, etc. We leave you with this Woola infographic, courtesy of Disney. (Actually, like Woola himself, we would never leave you.) 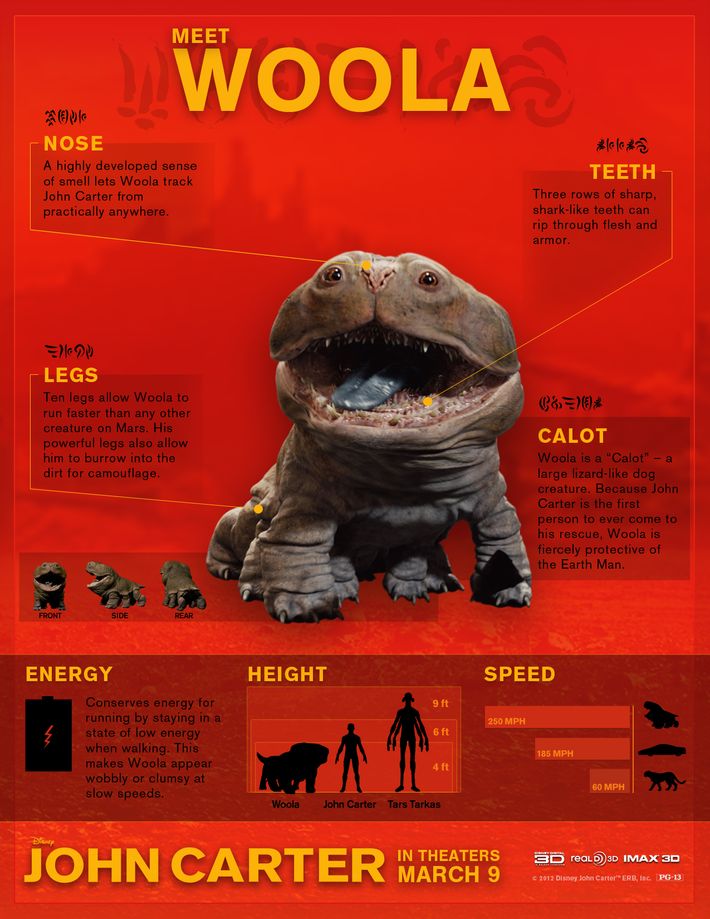 What is Woola? Let John Carter Critics Try to Tell You