Filmmaking duo Mark and Jay Duplass make comic hay with families in crisis, whether it’s the codependent mother-son relationship between Marisa Tomei and Jonah Hill at the heart of Cyrus, or the brotherly bonds of Ed Helms and Jason Segel tested in the recent Jeff, Who Lives at Home. In their new film, The Do-Deca-Pentathlon, those concerns have never been clearer: The movie follows two brothers (played by Mark Kelly and Steve Zissis) who secretly competed in their own version of the Olympics as children, then feel compelled to settle things with a rematch as adults … and during a family reunion, no less. Who will prevail? Vulture is invested in the outcome but unwilling to choose a side (we’re Switzerland!), which makes us the ideal place to exclusively debut the film’s poster. Enjoy the sneak preview, as the well-received SXSW film bows in theaters on July 6. 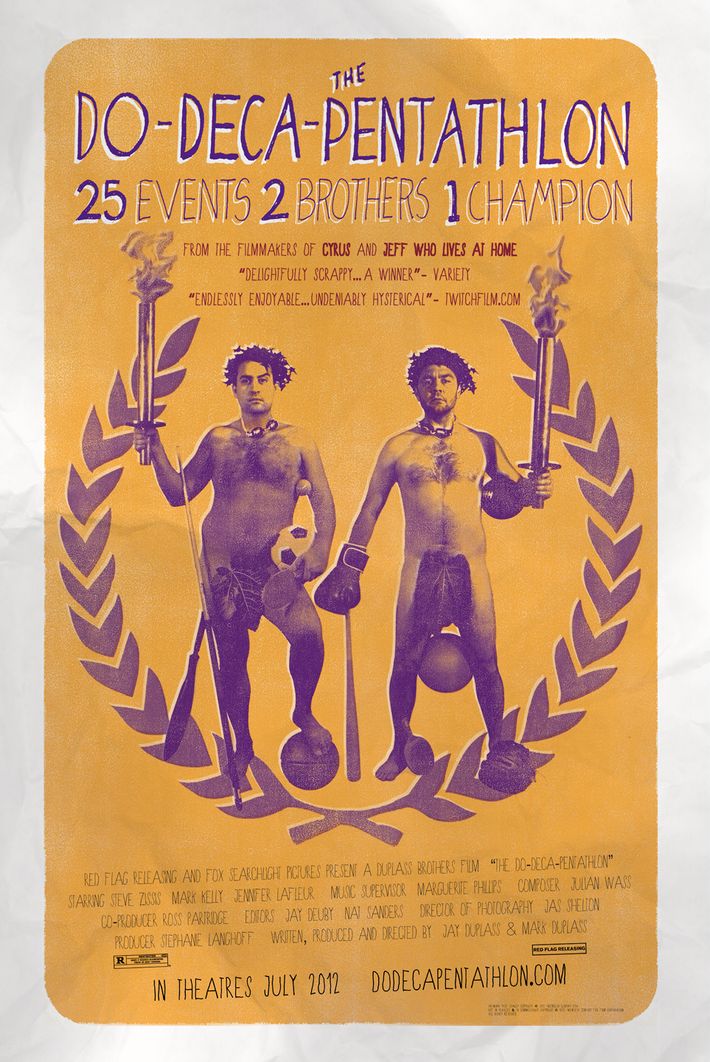 media digest 28 seconds ago
The Believer’s Brief Sale to a Sex-Toy Website Has a Satisfying Ending How the offbeat literary magazine returned to the hands of its original owner, McSweeney’s.
cannes 2022 1:00 p.m.
Cannes Returns, With Zombies in Tow This year’s festival opens with Final Cut, a zombie flick from The Artist’s Michel Hazanavicius. “I am prepared to be booed,” he says.
By Nate Jones
overnights 12:57 p.m.
Conversations With Friends Recap: The Last Supper Frances is devastated to learn that Melissa is “a good person,” which suggests Frances was the bad person all along. Whoops!
toxic love notes 12:30 p.m.
Amber Heard Wrote in ‘Love Note’ That She Wanted to ‘Devour’ Johnny Depp Today’s messy cross-examination included a back-and-forth about entries in Heard and Depp’s love journal.
underrated 12:00 p.m.
Bruce McCulloch Admires the ‘Ferocious’ Comedy of Julie Nolke The Canadian comedian comes highly recommended by the Kids in the Hall star.
By Bethy Squires
vulture 10x10 12:00 p.m.
The Sexual Tension Puzzle 5-Down, Seven Letters: Like onions … or ogres??
are you happy for me? 12:00 p.m.
Baby Keem Takes a Big Step on Kendrick Lamar’s Mr. Morale & the Big Steppers “Savior (Interlude)” might be his best performance ever.
times like these 10:32 a.m.
Taylor Hawkins Allegedly Told Dave Grohl He ‘Couldn’t F-cking Do It Anymore’ “That did take a year of working up the guts to do,” a friend of the drummer said.
cannes 2022 10:25 a.m.
What They Don’t Tell You About Booing in Cannes A handy tip before you read the festival-reaction stories out of the Croisette in the coming weeks.
By Nate Jones
album review 8:00 a.m.
How Does That Make You Feel, Kendrick? Whatever your problem, Mr. Morale & the Big Steppers wants you to talk it through.
another one 1:00 a.m.
Kourtney Kardashian and Travis Barker Got Married (Again) Sealed with the Kris of approval.
tragedy Yesterday at 11:23 p.m.
Kristin Chenoweth Is ‘Haunted’ by Her Connection to Oklahoma Tragedy “It has stuck with me my whole life. I could have been one of them.”
house tour Yesterday at 10:15 p.m.
Harry Styles Moved Into Harry’s House While Touring Fine Line “I feel like I got to hide a secret this whole time.”
overnights Yesterday at 10:05 p.m.
Better Call Saul Recap: Been Caught Stealing Kim is never quite who we expect her to be, is she?
overnights Yesterday at 10:01 p.m.
We Own This City Recap: High-Speed Chase This week details Wayne’s modus operandi both as a crook and the ultimate cop’s cop.
overnights Yesterday at 9:00 p.m.
Below Deck Sailing Yacht Recap: Vomit in the Shower Ashley …
overcome with emotion Yesterday at 8:15 p.m.
Daria Spinoff Jodie Announced As Film, Cast Includes Pamela Adlon and Kal Penn Tracee Ellis Ross will play the titular role in the film.
under oath Yesterday at 6:26 p.m.
Johnny Depp’s Lawyer Starts to Cross-Examine Amber Heard  Things are going to get even uglier.
the lost kingdom Yesterday at 5:57 p.m.
Amber Heard Says Her Aquaman 2 Role Was ‘Pared Down’ She claims Johnny Depp damaged her reputation by calling her abuse allegations a “hoax.”
overnights Yesterday at 5:53 p.m.
Conversations With Friends Recap: Get Out of Town Good-bye, dreary Ireland. Hello, unimaginably luxurious Croatia!
More Stories