Yes, we are aware of the date — it is April 25, a full two months before the calendar officially declares it summer and at least a month before most people will be able to contemplate a beach trip, barbecue, or any of the other recreational activities that typically signify the season. (If you live on a beach in Mexico, we congratulate you and ask what you are doing on the Internet.) But the time is near — you can feel it in the air, and on the radio, which has already been infiltrated with the first round of super-sunny, expertly dumb pop songs meant for Song of Summer contention. Isn’t it too early for SoS? you might be wondering. Well, we did too, and yet the very question filled us with deja vu, as if in years past we’d been dancing to some frothy tune during April showers and thinking this very thing! So Vulture did a quick history lesson to find out when the last twenty Songs of Summer were actually released into the wild, and whether or not there is an optimal release date for Song of Summer success. Our findings, below!

A quick note on methodology: Vulture worked from this list of Songs of Summer, as compiled by BuzzFeed and vetted by our own crack team last year. As for release dates, we used the single’s radio release, rather than album release date, as radio play and video promotion are crucial in determining a Song of Summer; these dates come from the record label’s official schedule where possible, and otherwise were cross-checked between the best available chart, music video, and album information. Here are the months that Songs of Summer were released, in order of frequency. 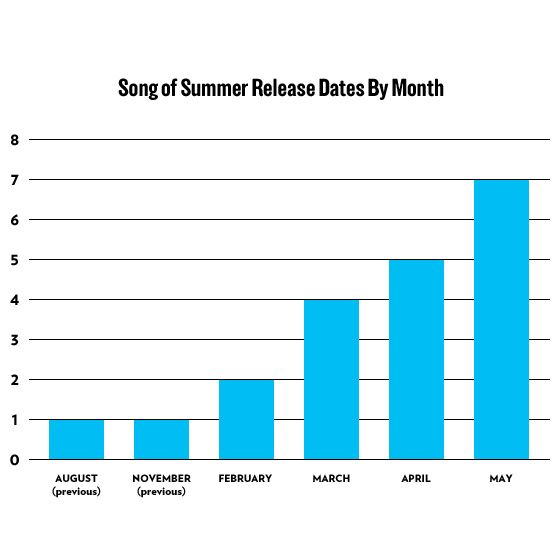 *This date was particularly hard to clarify, but Vulture went with April 26 based on the “It’s Gonna Be Me” video premiere date (May 23) and the fact that Bye Bye Bye had already sold a zillion copies by this point in 2000. People knew the song.

So, what can we gather from this exceptionally scientific analysis? May is clearly the winner, and February is usually too soon — meaning Nicki Minaj’s “Starships,” One Direction’s “What Makes You Beautiful,” and the Wanted’s “Glad You Came” probably hit too early this year. 2011’s Fun. and Gotye will need an Adele-style miracle to win (though maybe a James Franco endorsement is just that).

But! March and April together account for nine of the last twenty Songs of Summer, so it’s entirely possible that 2012’s Song of Summer is already worming its way into your ear now. Rita Ora? Justin Bieber? Carly Rae Jepsen? (Okay, that song has been out in Canada for ages, but she only just started pushing it in the U.S.) Anyway, the moral is: stay alert. The next song you hear could be the song that will haunt you all summer song.

survey says 29 mins ago
What Do Comedians Think of (the Non-Joke Parts of) Stand-up Specials? Here are insights from 39 of them.
By Hershal Pandya
explainers 5:27 p.m.
The Bullying Allegations at the Center of HYBE’s Next Big K-Pop Group, Explained After Korean forums accused Kim Garam of bullying, the internet was aflame.
overnights 4:12 p.m.
Stranger Things Recap: The Shire Is on Fire We (mostly) love Steve getting his big hero moment in the penultimate episode of Volume 1.
follow friday 4:06 p.m.
Michael Bonfiglio Wants to Tell You a Story We chatted with the director about the art of the stand-up comedy special — and, naturally, hummingbirds.
now streaming 4:00 p.m.
What’s Leaving Netflix: June 2022 Lady Bird, Criminal Minds, My Fair Lady, and more.
overnights 2:47 p.m.
Obi-Wan Kenobi Recap: Second Chances What feels a bit like Taken in space pivots to “John Wick: Chapter 2 in space” territory — and it works!
still learning 1:58 p.m.
Isaiah Rashad Comes Out as ‘Sexually Fluid’ in First Interview About Sex Tape “I’m not in full control of, when I walk into a room, of who I’m attracted to,” he told Joe Budden.
overnights 1:31 p.m.
Stranger Things Recap: This Old House We get a little haunted-house movie in the middle of Stranger Things!
courthouse chaos 1:30 p.m.
Johnny Depp Fans Are Out in Full Force As Trial Nears End When the clock hit 12:50 a.m. Friday, bedlam unfolded outside the Fairfax, Virginia, court parking garage.
summer preview 1:11 p.m.
What Will Be the Biggest Movie of the Summer? Vulture bets on five films that will break through the hottest months of 2022, in whatever ways they can.
By
summer preview 1:00 p.m.
10 Podcasts We Can’t Wait to Listen to This Summer From a new season of Slow Burn on Roe v. Wade to a “surf-rock audio drama” from a rising star.
in memoriam 12:57 p.m.
10 Essential Ray Liotta Performances From “mesmerizing newcomer” to legendary tough guy, Ray Liotta was magnetic onscreen.
hunter's line reading 12:53 p.m.
This One Ray Liotta Line Plays on a Loop in My Head The late actor’s performances operate on the edge of ravenous and resigned, but he’s almost pious in his line reading as a shark of a divorce lawyer.
By Hunter Harris
overnights 12:38 p.m.
Top Chef Recap: Tucson Time After studying the culture and traditions of Tucson, the chefs are focused and ready to push through the few remaining obstacles.
movie review 12:36 p.m.
The Comfortable Familiarity of The Bob’s Burgers Movie If you accept the narrative’s rigidity and safety, The Bob’s Burgers Movie is a jubilant bit of distraction.
overnights 12:22 p.m.
Grey’s Anatomy Season-Finale Recap: Hail to the Chief Grey’s makes the most of its 400-episode history with a finale that resets the game while paying homage to the past in some moving ways.
chat room 12:05 p.m.
Laura Haddock Was Gently Hazed While Filming Downton Abbey: A New Era Confirmed: A certain Crawley is a “cheeky monkey.”
vulture 10x10 12:00 p.m.
The Mustache Puzzle 1-Across, Four Letters: Song danced to with flailing arms.
scooby dooby doo 11:43 a.m.
I Ate All the Lyrics of Harry’s House Sure, the new Harry Styles album sounds really good, but how does it taste?
labor struggles 11:24 a.m.
How Was This Harry Styles Music Video Only $300? Was anybody paid?!
More Stories