The boys of Girls have inspired many a heated discussion: Are they terrible? Are they bad guys? Are they “losers”? Do we like them? Should the girls like them? Is it okay to like them? What would you do if someone peed on you, just hypothetically? Over the course of the first season’s ten episodes, overt weirdo Adam went from an emotionally withholding asshole to a weirdly vulnerable and endearing wedding date — with a pit stop at a nonconsensual golden shower. Charlie, the nice guy of the bunch, started as the vaguely pathetic guy who happily handles his girlfriend’s retainer to the vaguely pathetic guy who posts dozens of Facebook photos with his new girlfriend. And Ray, the least-seen of the bunch: snide, bossy, incredibly nosy (he’s the one who first discovered Hannah’s diary and encouraged Charlie to read it), and not very kind. And yet between his budding relationship with Shoshanna, whom he babysat while she was on crack, and his fashion tips for Hannah, he managed to eke out a win in the likability contest. We decided to chart the guys’ likability over the course of the season to help us — and you — understand their individual arcs. 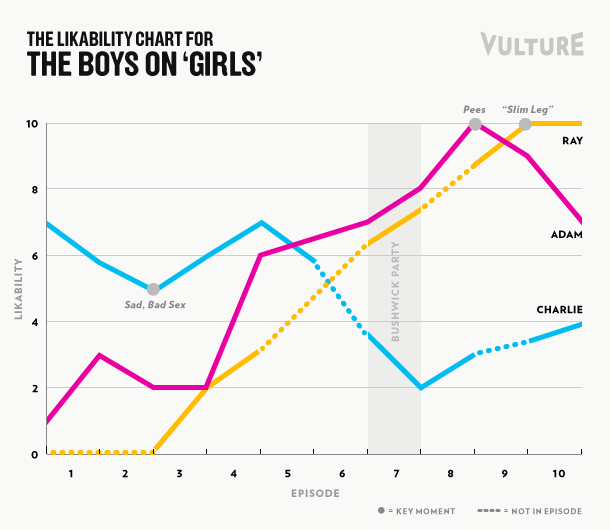 We Graph the Likability of the Boys on Girls

my single is dropping 12:30 p.m.
Kodak Black Releases Track with Lyrics About Trump Commuting His Sentence On “Last Day In,” Kodak Black addresses Trump’s presidential pardon.
coronavirus 1:00 a.m.
All the Live Events, Movie Releases, and Productions Affected by the Coronavirus Who’s next?
coronavirus 1:00 a.m.
Here Are All the Movies Delayed Because of the Coronavirus With updated release dates where available.
now streaming Yesterday at 7:30 p.m.
The 50 Best Movies on Peacock Pride & Prejudice, E.T. The Extra-Terrestrial, Mamma Mia!, and 47 other great films.
we did it jojo Yesterday at 7:00 p.m.
What Could JoJo Siwa’s “Born This Way” TikTok Possibly Mean? The 17-year-old rainbow-lover officially came out as gay, confirming fans’ suspicions.
vulture recommends Yesterday at 4:46 p.m.
Get Into This Lip Sync Even If You Don’t Watch RuPaul’s Drag Race We’ve got ourselves a bona fide lip-sync assassin on season 13, and her latest performance was the John Wick of lip-sync massacres.
streaming theater review Yesterday at 3:21 p.m.
Irish Eyes, Unsmiling: Mark O’Rowe’s The Approach Is a Three-Actor Showcase Streaming from Dublin.
today in wigs Yesterday at 2:37 p.m.
Kenneth Branagh Will Play Boris Johnson in COVID Miniseries BoJo à Go-Go.
r.i.p. Yesterday at 1:57 p.m.
Wolf Blitzer, Bill Clinton, More Stars and Colleagues Pay Tribute to Larry King Many are sharing their best King clips on Twitter.
r.i.p. Yesterday at 9:44 a.m.
Broadcasting Legend Larry King Is Dead at 87 The prolific interviewer worked on his Ora TV series up until his death.
books Jan. 22, 2021
Cecily Strong Promises You This Will All Be Over Soon With New Memoir The Saturday Night Live star’s first book is due in bookstores August 10.
overnights Jan. 22, 2021
RuPaul’s Drag Race Recap: Happy RuPaulidays! It’s finally time for the first elimination of the season, but first we must endure the first acting challenge of the season.
reboots Jan. 22, 2021
Fox Reboots America’s Most Wanted With New Host Elizabeth Vargas Seems like a hard ask during quarantine, but we’ll keep our eyes peeled.
books Jan. 22, 2021
Details of Anthony Doerr’s Cloud Cuckoo Land Finally Reach Our Timeline The follow-up to his Pulitzer-winning All the Light We Cannot See.
casting call Jan. 22, 2021
Brie Larson Whipping Up Some Lessons in Chemistry Over at Apple+ As a 1960s scientist turned cooking-show host.
hsmtmts Jan. 22, 2021
High School Musical: The Musical: The Series: The Drama Sabrina Carpenter is now telling her side of the story with a surprise single, “Skin.”
movie review Jan. 22, 2021
Netflix’s The White Tiger Is a Brutal, Powerful Tale of Ambition and Corruption Ramin Bahrani, one of our great directors, adapts Aravind Adiga’s international best seller.
By Bilge Ebiri
'skin' in the game Jan. 22, 2021
Is Sabrina Carpenter’s New Song ‘Skin’ Her Response to ‘Drivers License’? Joshua Bassett has voiced his support for his rumored girlfriend’s new song.
now streaming Jan. 22, 2021
What’s Leaving Netflix: February 2021 Easy A, GoodFellas, Saving Mr. Banks, and more.
vaccine watch Jan. 22, 2021
All the Celebrities Who Have Received the COVID-19 Vaccine So wholesome.
By Gabrielle Sanchez
More Stories