In Why Stop Now, piano prodigy Jesse Eisenberg has to wrangle two people even more eccentric than he is: his mother Melissa Leo … and his mother’s drug dealer, Sprinkles (played by Tracy Morgan). Can this unlikely trio come together so Eisenberg can spirit Leo away to rehab in time to make a crucial audition? (And can we hear some of the on-set stories from casting these three highly specific actors and putting them opposite each other?) Formerly titled Predisposed, the comedy made its debut at Sundance and will open August 17 in theaters, making its way to video-on-demand a month before, starting July 5. Vulture’s got the exclusive poster debut … enjoy! 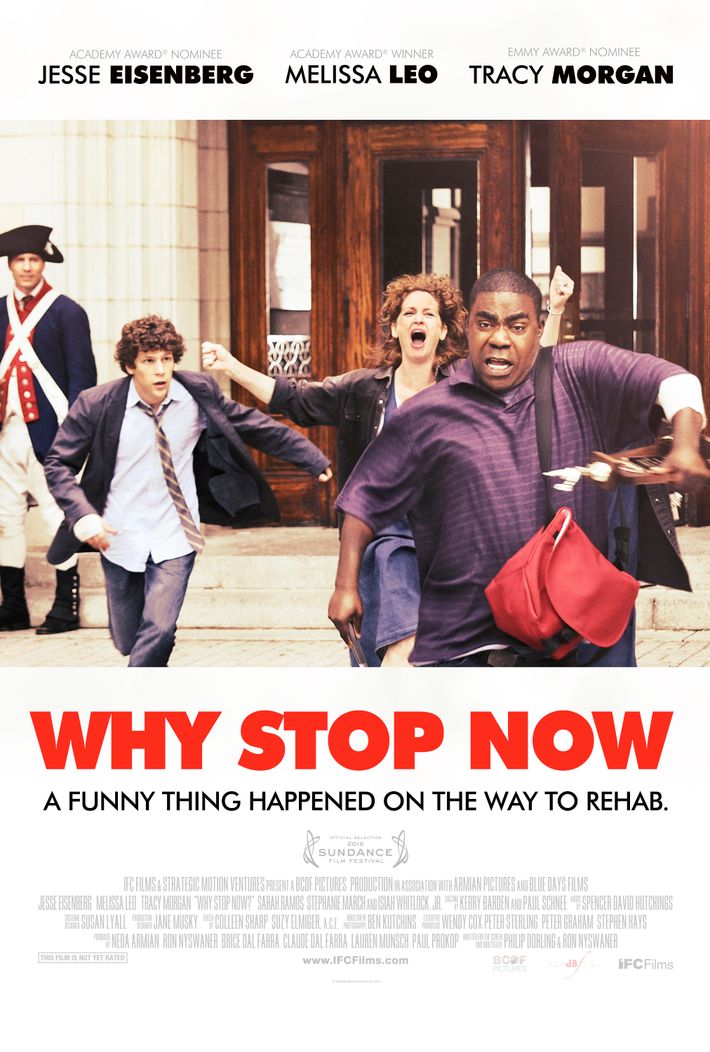 The Why Stop Now Poster With Eisenberg, Morgan

unpressed 2 mins ago
Kiki Layne Isn’t Worried About Being ‘Cut’ From Don’t Worry Darling She got her man and her check.
fine lines 15 mins ago
Kelsea Ballerini’s Country Favorites Five classic lyrics that inspired the 28-year-old star to cut loose on her new album.
the festival circuit 24 mins ago
A$AP Rocky Takes ‘Full Responsibility’ for Short Rolling Loud Set At least he brought out GloRilla.
housewives institute bulletin 12:00 p.m.
What in the Lisa Rinna M&M? The celebrities are sounding off about the ‘wives, and the RHOA ladies are pretty in peach at the reunion.
freaky friday 11:49 a.m.
Elizabeth Banks Could Do The Martian, But Could Matt Damon Do Cocaine Bear? “Matt Damon, love him. He’s having to figure out how to survive. I want that role.”
chat room 11:20 a.m.
House of the Dragon’s Matthew Needham Is Playing Larys As a Hero “He might seem completely mad, but it’s very methodical.”
one perfect scene 10:00 a.m.
A Hell of an Introduction How director Romain Gavras and his cast and crew created the year’s wildest movie opening.
By Bilge Ebiri
explainers 9:48 a.m.
‘No One Has Been Ruled Out’ of Facing Charges in Rust Shooting The state of New Mexico received funds to prosecute up to four defendants in the shooting.
book review 9:42 a.m.
When Grief Returns Again, and Again, and Again … In her time-looping novel The Furrows, Namwali Serpell’s deft use of repetition makes the plot feel dynamic even as she retells the same story.
vulture picks 8:00 a.m.
25 Notable New Releases Over the Next Two Weeks Bella Hadid joins Ramy, Hasan Minhaj’s latest Netflix special, Pavement reunites, and more.
overnights Yesterday at 10:10 p.m.
House of the Dragon Recap: A Bad Egg Like it was for the Starks in early Game of Thrones episodes, the stakes for child’s play are high for these little Targaryens.
overnights Yesterday at 10:00 p.m.
American Gigolo Recap: Even Faster, Johnny This week, American Gigolo gets a little sleeker (if not sexier).
fire and blood Yesterday at 10:00 p.m.
Who’s Who in Westeros: A House of the Dragon Character Guide Keeping up with the Targaryens after episode six.
overnights Yesterday at 9:00 p.m.
The Serpent Queen Recap: The Melon and the Eggplant Catherine and Diane are now united, which makes for great television.
obits Yesterday at 8:35 p.m.
Dale McRaven, Mork & Mindy and Perfect Strangers Creator, Dies The star-making producer was 83.
behind the scenes Yesterday at 7:05 p.m.
Leslie Grace Shares New Behind-the-Scenes Footage of Batgirl on TikTok Including Brendan Fraser’s Firefly.
love can build a bridge Yesterday at 6:48 p.m.
Wynonna Judd on Touring Without Her Mother “I really miss you. Why aren’t you here so we can argue?”
injuries Yesterday at 6:06 p.m.
Post Malone Hospitalized With Breathing Difficulties, ‘Stabbing Pain’ He promised fans he would reschedule his Boston concert.
rihannaissance Yesterday at 5:39 p.m.
Rihanna to Headline 2023 Super Bowl Halftime Show The most important person the NFL has ever drafted.
darling we're worried Yesterday at 3:15 p.m.
How Did Don’t Worry Darling Become So Worrying? A timeline of the (alleged) drama involving Olivia Wilde, Harry Styles, and Florence Pugh.
More Stories