The Nostalgia Fact-Check is a recurring Vulture feature in which we revisit a seminal movie, TV show, or album that reflexively evinces an “Oh my God, that was the best ever!” response by a certain demographic, owing to it having been imprinted on them early. Now, years later, we will take a look at these classics in a more objective, unforgiving adult light: Are they really the best ever? How do they hold up now? We’ve already reconsidered a number of once-beloved entertainments. This week, we consider the greatest Olympics love story ever told: The Cutting Edge.

Background: Long, long before the Bourne trilogy and Michael Clayton, a then-unknown Tony Gilroy wrote a small movie about an injured hockey player, an overprivileged female pairs skater, and a daring ice-skating move that would come to be known as the Pamchenko twist. The Cutting Edge, starring Moira Kelly and D.B. Sweeney, was released in 1992 and made $25 million at the box office; it found a second life on television, where it played repeatedly in the latter half of the nineties.

Nostalgia Fact-Check: To establish my nostalgia credentials, please know that I can actually quote two Cutting Edge lines from memory. The first is a Doug Dorsey zinger: “There’s only two things I do really well, sweetheart, and skating’s the other one.” The second, as anyone with a passing knowledge of the movie will be able to guess, is “Toooooooee pick.”  “Toe pick” is an important sociological artifact; “toe pick” is late-nineties girl code, a way of letting others know that you share same the values and taste in scrunchies. You believe in figure skating; you believe that true love can triumph — and you have watched The Cutting Edge on cable 4 million times like the rest of us.

Vulture chose this particular week to revisit The Cutting Edge because it is an Olympics movie, and the (Summer) Olympics kick off tonight in London. But the believers among you will know that The Cutting Edge — though an excellent Olympics movie — is not just an Olympics movie; it is first and foremost a rom-com. It has training montages and competitive setbacks aplenty, of course, and lots of fast talk about the Pamchenko. But it also has the traditional form and rhythm of the romantic comedy: boy meets girl; boy chases girl (around ice); boy almost loses girl (to a snooty Harvard MBA, and then because of an unfairly permed Midwestern twin); boy wins girl with dramatic speech (at the Olympics). The beats are all there.

This is all by way of saying that The Cutting Edge is still highly enjoyable, in part because it was so structurally sound the first time around. In 2012, this movie would be made as a Step Up on ice, with professional skaters instead of actors and a plot filled in around the high-tech 3-D routines. We know this because it’s pretty much how the 2006, 2008, and 2010 Cutting Edge sequels panned out on ABC Family — give or take a sequined ass falling out of the screen with every botched lift. But the original has a real, three-act script by Gilroy and actors who can manage the actual jokes contained within. (“What happened to the alarm?” “You said nein.” “Yeah, nine!”) Moira Kelly shines in particular; I feel bad now for booing in her general direction for an entire season of West Wing. (I feel bad, too, for abandoning D.B. Sweeney, so that he had to go and sign up for the John Galt role in Atlas Shrugged 2. True.) And it’s refreshing, in the era of gravity-troubled Sorkin heroines and literal pixie dream girls, to watch a rom-com heroine dish out 90 minutes of unapologetic attitude and still get the dude. Remember this movie’s tagline: “She’s got a nickname that rhymes with rich.” Perfect.

The cheesiness of that tagline seeps into basically every aspect of The Cutting Edge; this is a deeply late-eighties movie, a period piece, really, with its teal spandex and Joe Cocker songs and leftover Cold War sentiment. My memory of early nineties clothing begins and ends with Umbros, so I am certainly not one to offer historical fashion judgements, but: This vest was ridiculous even in 1992, right? 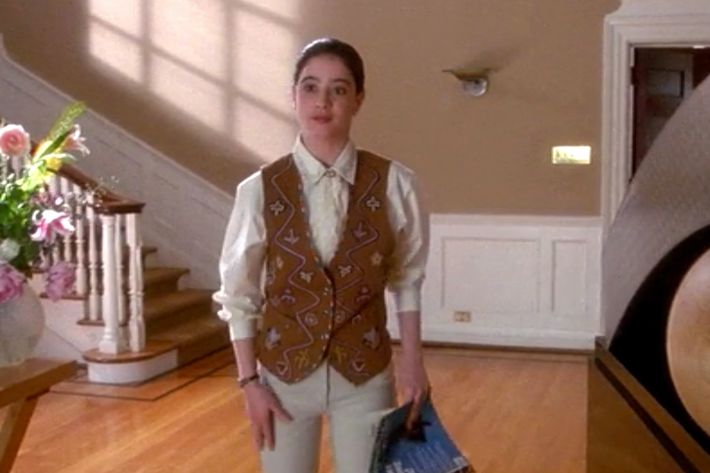 Please understand me: It’s also amazing. I’m in another tab doing eBay searches for that vest right now. But The Cutting Edge’s production values have probably benefited from time (and, it should be said, a deep respect for neon and other aesthetic absurdities). The soundtrack and the windbreakers were maybe a little lame when it first came out, but now — now it is a rom-com relic, to be respected and gently mocked on Halloween.

Let’s talk briefly about the skating, since we are here because of the Olympics, and the Olympics scenes here do revolve around Salchows and technical scores. Do you remember Gordeeva and Grinkov? They were the married Russian pairs team of that era, gold medalists in Calgary and Lillehammer; they had a nice post-USSR love story, and a cute kid, and a long program to “Maria” from West Side Story. (Then Grinkov had a heart attack mid-training session and died. It was incredibly sad.) The Russian favorites in Cutting Edge are presumably based on their real-life counterparts, who dominated every single international competition from 1986 to 1994, but … yeah, the movie skaters aren’t really on that level. As in, we get mostly fuzzed-out shots of the perfectly competent skating doubles performing single lutzes to “weird music.” (Kate’s words, but true.) Wisely, the movie never shows an entire program, or even more than a minute of skating; commentators fill in the story gaps, and we’re happy to trust them when they say that Kate and Doug’s short program lacked chemistry; it keeps things moving. But if you came to The Cutting Edge expecting to relive the glory days of the Central Red Army Club, well, could I point you toward YouTube?

I would also recommend YouTube (for the Miracle speech, or just some old Coach Taylor wisdom) if you are in search of a pep talk. For a movie about a washed-up hockey player and a partnerless pairs skater who come together to master the most dangerous athletic act ever committed to ice, The Cutting Edge comes up short on inspiration. “Believe me, Gretzky, I am the last person who is coming to look for you” is about as close as we get to a Cool Runnings moment, and the quote definitely is not followed by D.B. Sweeney carrying Moira Kelly across some symbolic finish line. Even the empty medal box is unmoving, and it’s supposed to be about dreams.

But frankly, those are minor complaints, and The Cutting Edge isn’t about a medal ceremony, anyway.  As we established above, and as I somehow understood, even before I actually understood what “the other one” meant — it is all about a make-out. An Olympic make-out! Why don’t they program more of those on NBC?

How Does The Cutting Edge Hold Up?

courthouse chaos 4 mins ago
Johnny Depp Fans Are Out in Full Force As Trial Nears End When the clock hit 12:50 a.m. Friday, bedlam unfolded outside the Fairfax, Virginia, court parking garage.
summer preview 22 mins ago
Stranger Things 4 Has Big Blockbuster Energy The Netflix smash was once a TV show that paid homage to films released decades ago. This season, it’s threatening to become a series of those films.
overnights 22 mins ago
Stranger Things Recap: Running Up That Hill The most Stranger Things needle drop reminds that Kate Bush saves lives.
overnights 9:00 a.m.
Stranger Things Recap: Making Connections Don’t you love it when our friends start to come together?
overnights 8:30 a.m.
Stranger Things Recap: Proof of Life The gang is having trouble adapting to their new homes.
cannes 2022 8:00 a.m.
Cronenberg’s Cannes Comeback The director’s stomach-turning new movie has him back in the festival’s good graces.
By Rachel Handler
overnights 8:00 a.m.
Stranger Things Season-Premiere Recap: Save the Cheerleader The Duffer Brothers promised a darker version of Stranger Things now that the kids are a little older and, buddies, they aren’t lying.
hello clarice 1:31 a.m.
Jodie Foster to Star in True Detective Season 4 Titled True Detective: Night Country.
theater review Yesterday at 10:17 p.m.
Fat Ham Aims to Put the Ha in Hamlet Too too solid.
tributes Yesterday at 8:46 p.m.
Lorraine Bracco, Martin Scorsese, and Others Remember Ray Liotta Liotta died at the age of 67.
memories Yesterday at 5:01 p.m.
I Sat Front Row at Maria Bamford’s Comedy-Special Experiment 2012’s The Special Special Special! remains a source of inspiration for comedians. Here’s what it was like to be there on the couch next to her.
By Wayne Federman
nihilism Yesterday at 4:50 p.m.
Does the Johnny Depp Trial Have a Point? Experts weigh in on the great nihilistic trial of 2022.
refresher course Yesterday at 4:37 p.m.
What Stranger Things Are We Afraid of, Again? As we brace for a fourth round of chaos in Hawkins, let’s review the villains, both otherworldly and human, we’ve met along the way.
obits Yesterday at 4:25 p.m.
Andy Fletcher, Depeche Mode’s Keyboard Savant, Dead at 60 The band confirmed his “untimely” passing.
extra credit Yesterday at 4:20 p.m.
Maggie Rogers’s Coachella Set Doubled as a Grad-School Project The singer-songwriter recently earned a master’s in religion and public life from Harvard.
stan culture Yesterday at 4:02 p.m.
Amber Heard Addresses Johnny Depp Stans and Social Media in New Testimony She told the jury that Depp promised her “global humiliation.”
2022 summer preview Yesterday at 3:56 p.m.
A Guide to This Summer’s Indies (Based on Genres Familiar and Not) Is “ethically dubious podcaster” a genre? Maybe it should be!
summer preview Yesterday at 3:32 p.m.
Summer TV Used to Mean Something, Damn It Once upon a time, television programming mirrored the rhythms of life. Now it’s become the calendar version of the endless scroll.
encounter Yesterday at 3:19 p.m.
Édouard Louis Wants You to Go Protest After Seeing His One-Man Show The French writer is frustrated with Americans.
don't get your pooh on shein Yesterday at 1:19 p.m.
Public-Domain Winnie the Pooh Stars in New Slasher Film It’s a rather murder-y day.
More Stories