When you’re making a would-be blockbuster, there are certain scenes and even subplots that may have to fall by the wayside before you arrive at a final cut, especially when you’re trimming down The Amazing Spider-Man to a just-right two hours and sixteen minutes. The unusual thing about Sony’s web-crawling reboot, though, is that the studio actually showed off several eventually deleted scenes in the yearlong run-up to release, while other truncated plotlines from the film were teased in news reports. What went missing in The Amazing Spider-Man? Here are just a couple of the glimpsed-and-gone bits. (Spoilers follow, naturally.)

Dr. Connors Had a Family
Only once do we get a scene of Dr. Curt Connors (played by Rhys Ifans) at home, and it seems like his house wasn’t initially a bachelor pad. Weeks before Amazing Spider-Man began filming, actress Annie Parisse (Law & Order) was cast as Connors’ wife, and shortly after that, the couple’s son was reportedly cast, too. Neither made it into the final cut.

The Lizard Lick
When the Lizard decides to pursue Peter Parker, he follows the underground plumbing to Peter’s school, then bursts out through the floor of a bathroom stall. That much made the finished film, but at Comic-Con last year, director Marc Webb showed off a scene that was longer and significantly different: Before the Lizard busted out, two teenage girls were making chatty small talk in the bathroom. Understandably freaked out by the giant monster bursting through a toilet, the girls then cowered in the corner… at which point the Lizard came toward them, got all up in their personal space, and gave one of them a lascivious tonguing. It was a sexually unsettling moment that was wisely trimmed from the family film.

The Fate of Irrfan Khan’s Character
What happens to Rajit Ratha (played by Irrfan Khan), the shady guy working for Norman Osborn who pressures Dr. Connors into self-testing his lizard serum? In the final cut, the newly reptilian Connors goes after Ratha on the car-choked bridge, and then Ratha disappears from the rest of the movie. Apparently, the two were supposed to meet again, as Sony released a still not long ago that finds Ratha and the Lizard in a confrontation in the sewers. It does not appear to be going well for Ratha. 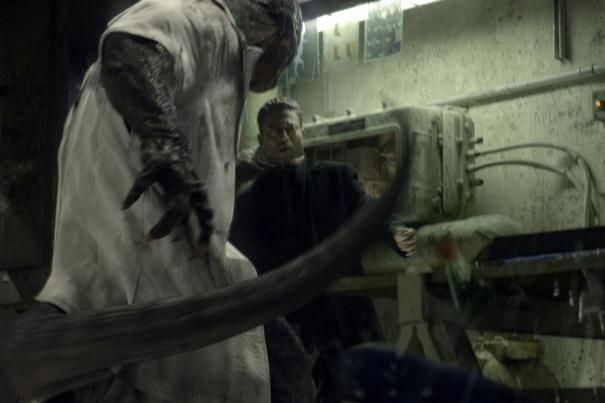 The Doorman Scene
The very first clip released from The Amazing Spider-Man was a scene that didn’t even make the movie: Peter Parker’s attempt to get past a pushy doorman at Gwen Stacy’s building. In the final film, he just appears on Gwen’s fire escape, explaining that her doorman was intimidating.

Much of the First-Person Swinging
The first teaser trailer culminated with a bravura, one-take, first-person shot of Spidey running along buildings, flinging web, and flying toward a giant skyscraper. Perhaps because it was a little bit video-gamey, though, that long take was cut to shreds in the final film version, with only little bits surviving. You can check out the whole thing at the end of this teaser.

The Origin Story?
Posters and plot synopses for The Amazing Spider-Man promised that we’d get “the untold story” of what made Peter Parker into Spider-Man, but by the end of those two hours and sixteen minutes, you haven’t learned much that’s new: Peter still gets a mutant spider bite, and his Uncle Ben still motivates his superheroics in death. Rumors have flown, though, that Webb had in mind an origin story tweak: This time around, Peter’s absent dad secretly engineered his transformation into Spider-Man. Certain trailer lines (“Do you have any idea what you really are?”) and dangling bits of the parental plotline could buttress that theory, though for his part, Webb has denied that angle was ever a part of the first film. But with two more movies planned, and a mid-credits secret scene that continues teasing a secret that Peter’s father had kept from him, maybe this tidbit was cut to give Spider-Man something to work with later on.

What Was Cut From The Amazing Spider-Man?