In their RNC debut last night, Clint Eastwood and his stand-up partner, Invisible Obama, emerged as the latest in a rich comedy tradition: the straight man and his invisible antagonist who nobody can see but him. Whether it’s Harvey’s Elwood P. Dowd and his rabbit or Calvin and Hobbes, it’s always great fodder for laughs to have one guy arguing with what seems like thin air, while those around him make (or think) the cuckoo sign. Clint and Obama’s Chair had a strong debut, complete with one-sided bickering (“I am not going to shut up, it is my turn!”) and vintage double takes (“I wondered about the … what do you want me to tell Romney?”). But how does this up-and-coming team match up against other Hall of Fame half-visible-half-not partnerships? We pitted Eastwood and Obama against seven other teams to see who makes the better comedy duo. We think you’ll like what you see. Zing!

While this is the most wholesome of friendships, it was long marred by Snuffy’s passive-aggressive refusal to reveal himself to Big Bird’s other friends, thus making the bird seem clinically insane in their eyes. Infuriatingly, Snuffleupagus continued to maintain that he was BB’s best friend, even as he conveniently wandered off every time others would come near, waiting seventeen seasons to finally make himself known. Accident or world’s longest punking?

BETTER BUDDY: Clint/Obama. For all their barbed repartee, you get the sense that Obama would never fail to gruffly show up to help Clint in the clutch, like Han Solo popping up at the end of Star Wars to blast the TIE fighter on Luke’s tail.

God (George Burns) picks supermarket assistant manager Jerry (John Denver) to be his spokesman, with God remaining invisible while setting the stage for kooks to worship Jerry and his family and co-workers to think he’s nuts.

BETTER BUDDIES: Jerry/God. Odds are that when Jerry and God’s friends get together, they wouldn’t get sucked into unfunny, vicious arguments over gay marriage and abortion like Clint and Obama’s posse’s would. 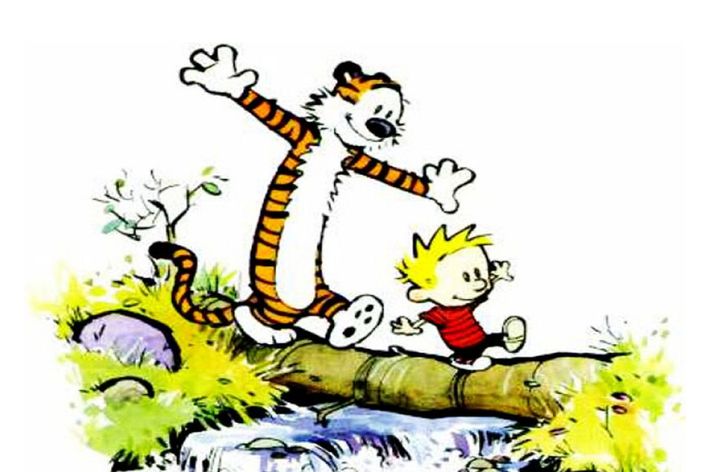 Hobbes seems like an innocuous stuffed animal to everyone else, but to Calvin the tiger is his living, breathing partner in destruction.

BETTER BUDDIES: Calvin and Hobbes, if only because Clint would make a better Hobbes. You can picture him sitting behind Obama on a sled, cheering him on as they prepare to slam it right into Iran.

Drop Dead Fred, the long-lost imaginary friend of now-grown-up Lizzie (Phoebe Cates), reemerges to wreak havoc, stare up women’s dresses, and get hit in the balls.

BETTER BUDDIES: Clint/Obama. Drop Dead Fred’s antics are too shrill and exhausting. President Obama would never try to close down Gitmo (even after spending so much money on it) by throwing paint on all the guards and dancing around like a crazy person. But, devil’s advocate, let’s say he did? Apologies to Phoebe Cates, but Clint would not put up with that shit.

Roger and Edwina, All of Me

Lawyer Roger (Steve Martin) is constantly caught arguing with the spirit of the late millionaire (Lily Tomlin) whose spirit has been transferred into his body.

BETTER BUDDIES: Roger/Edwina. Martin’s physical comedy, as he flounces around like Tomlin, adds an extra humor level that Clint wouldn’t be able to duplicate. Every Eastwood confrontation with Obama would end with the actor slowly walking away, grumbling about “bifurcating this and bifurcating that,” which opens up very few farcical opportunities.

Six feet, three and one-half inches, Harvey is a giant invisible rabbit that can only be seen by Jimmy Stewart’s pleasant drunk, Elwood. Dowd says they met when he heard Harvey call to him from a lamppost; though his description makes it sound as if the rabbit were trying to pick him up, buy him a drink, and do things that Rick Santorum would not approve of, the two settled into a fine friendship. So much so that, when various family members try to have Dowd committed because of Harvey, he takes it all in stride.

BETTER BUDDIES: Dowd/Harvey. Despite his boozing, Elwood is so dadgum likably amiable and unflappable. There’s nothing of Eastwood’s “get off my lawn/bar stool or I’ll shoot you” rage about him.

Captain Howdy is the mischievous pal of young Regan who hogs the Ouija board and encourages her to play party tricks like peeing all over the floor. He is also Satan.

BETTER BUDDIES: Clint/Obama by a hair. Picture them both in odd-couple comedy movies: Regan/Howdy would be able to milk laughs by having the Oscar-like Howdy leave messages like “I borrowed 50 bucks” etched on the Felix-ian Regan’s stomach. But can’t you just envision Obama and Eastwood grumblingly going cross-country on a box car while handcuffed together? (Obama: “You know what I say: It’s all about hope and change.” Clint: “You better hope I change my mind about punching you in the face.”) But Clint and Obama get the edge because it’s really hard to get a PG-13 these days with cross masturbating.

Editor’s Note: The Calvin and Hobbes example has been edited, as someone rightly pointed out that Hobbes wasn’t really like Calvin’s id, as originally written: Calvin had enough id for six boys without needing his tiger’s input.