It’s simple movie math, really. Name a film Seven Psychopaths and you naturally need a septet of promo posters, each one highlighting an unstable character from the upcoming dark comedy by In Bruges’ Martin McDonagh. Vulture has the one of Woody Harrelson, a.k.a. “the one with issues,” looking part Blue Steel, part Natural Born Killers. (Other psychopaths include Christopher Walken, Sam Rockwell, Colin Farrell, and Tom Waits.) Harrelson plays Charlie the gangster, the latest victim of Rockwell and Walken’s dognapping get-rich-quick scheme. But unlike their other marks, the distraught tough guy doesn’t meekly fork over the cash for his missing Shih Tzu. CBS Films will release the black comedy October 12. 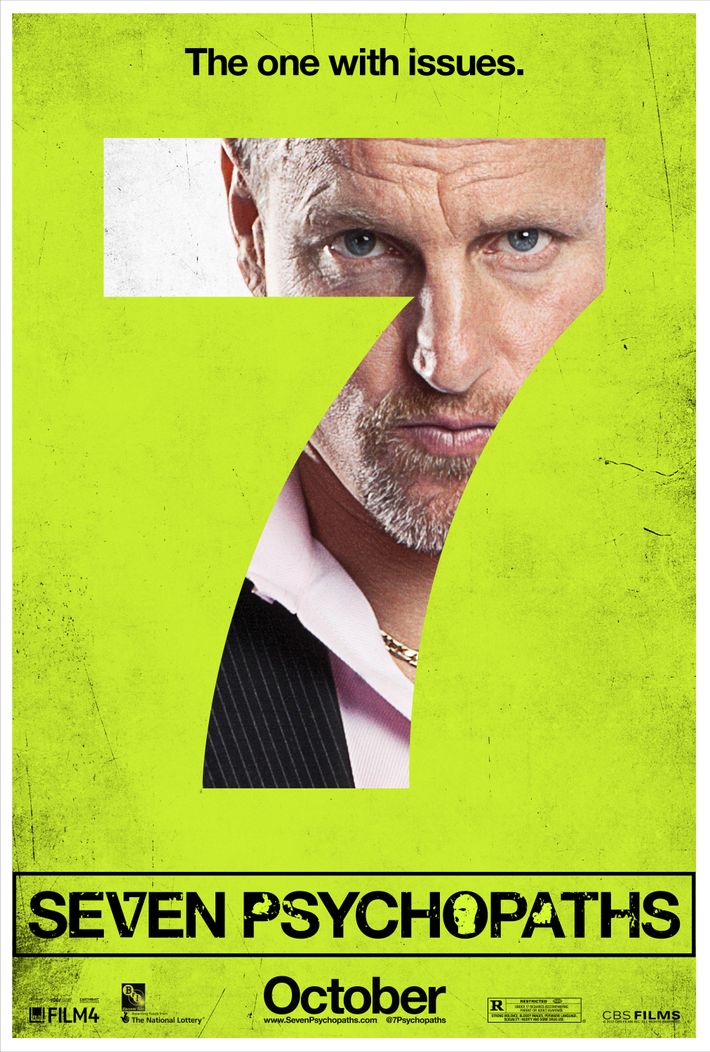 See Woody Harrelson As One of Seven Psychopaths

fantasy 8:00 p.m.
Spielberg, Duffer Brothers Charm Netflix With Stephen King’s The Talisman The Stranger Things siblings are developing a TV series based on the 1984 fantasy novel by King and Peter Straub.
videology 6:50 p.m.
Spring Has Sprung in SZA’s ‘Good Days’ Music Video The singer hangs out with some fungi before teasing the upcoming visuals for “Shirt.”
this week in late night 5:58 p.m.
Minari’s Alan Kim and his Purple Belt Won Late Night This Week In a week dominated by WandaVision, Minari’s adorable breakout star rose to the top.
oscar futures 5:42 p.m.
Oscar Futures: Can Surprise Globe Winners Keep Up Momentum? As Oscar voting gets underway this week, the Globes gave the Academy a vision of Nomadland and Andra Day triumphant.
By Nate Jones
tea-mz 5:28 p.m.
Terms of Service: Your Guide to the Lingo of TeaTube From Adpocalypse to Tati Westbrook, all the shorthand to make you fluent in YouTube drama.
By Daysia Tolentino
close reads 5:25 p.m.
My Spirit Left My Body Watching This Ginny & Georgia Scene Oppression Olympics … let’s go?
movie review 4:53 p.m.
Boogie Needs to Grow Up Eddie Huang’s directorial debut is an Asian American coming-of-age story that could use more self-examination.
interview 4:39 p.m.
Behind the 25-Year Friendship That Gave Birth to Netflix’s The White Tiger A chat with Aravind Adiga and Ramin Bahrani.
movie review 4:32 p.m.
The SpongeBob Movie: Sponge on the Run Will Make You a Better Person It’s Thelma and Louise meets The Quick and the Dead meets Inception meets Barb and Star Go to Vista del Mar meets Inherit the Wind.
soundtracks 4:24 p.m.
Mitski Is the Cowboy in Country-Tinged Track ‘The Baddy Man’ From her forthcoming soundtrack to the graphic novel This Is Where We Fall.
follow friday 3:46 p.m.
Vinny Thomas Lies to His Uber Drivers We caught up with the comedian on Instagram Live today.
wandavision 3:30 p.m.
So Is WandaVision Getting a Season Two? “I’ve been at Marvel too long to say a definite ‘no’”
easter eggs 3:15 p.m.
All the WandaVision Easter Eggs You Might Have Missed As with everything Marvel, scratch the surface of this show and you’ll find a host of nods to both comics and MCU history.
casting call 2:48 p.m.
With Broadway Shuttered, Mandy Patinkin Joins The Good Fight Because what else is a stage icon to do these days?
release dates 2:47 p.m.
Let’s Go, Lesbians: Billy Eichner Rom-com to Premiere in Summer 2022 Let’s go!
the suits family 2:43 p.m.
Patrick J. Adams, Meghan Markle’s TV Husband, Goes Scorched-Earth on the Royals “Find someone else to admonish, berate, and torment. My friend Meghan is way out of your league.”
chaos magic 2:31 p.m.
You’ve Gotta Respect Paul Bettany Having Fun With WandaVision Casting Rumors What can we say, Bettany loves Bettany.
tea-mz 2:16 p.m.
Glimpsing Behind the Curtain of YouTube’s Anonymous Tea Channels The creators behind Sister Spill, Spill Sesh, BeefTube, and Here For The Tea on telling everyone’s business but their own.
By Sandra Song
receipts 1:55 p.m.
Tekashi 6ix9ine Posts Homophobic Joke, Lil Nas X Responds with the DMs “This you?”
finales 1:25 p.m.
WandaVision’s Big Farewell Feels Hopeful Yet Rings Hollow What feels beautifully poignant in the context of a sitcom universe becomes painfully boring in the context of a Marvel one.
More Stories