You’d expect some seriously special effects from any movie made by the Wachowskis (who gave us The Matrix), and on that score, Cloud Atlas delivers. But though it can boast several awesomely realized CG cityscapes, the film (which was co-directed by the Wachowskis with Tom Tykwer and premiered this past weekend at the Toronto Film Festival) places a premium performance on practical makeup more than any movie the Wachowskis have yet made; in fact, more than almost any movie we can think of. You see, for this genre-hopping, epoch-spanning sci-fi drama, stars like Tom Hanks and Halle Berry play multiple characters in different eras, and they’re sometimes even asked to cross racial or gender lines to hammer home the central themes of reincarnation and connection across all boundaries. Which transformations are the most audacious? Read on.

White Halle Berry
Vulture has probed the startling idea of white Halle Berry once before, and while we suggested that she most closely resembles Madonna, readers convincingly put forth Vera Farmiga and Leslie Mann, too. But now that we’ve actually seen the movie, and we know that this Berry character, Jocasta, is a haughty Jewess with a thing for British men, that ought to tip the scales in Madonna’s favor, right? 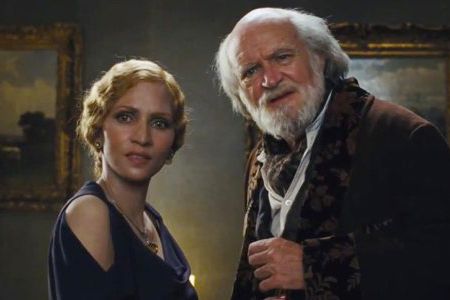 Tom Hanks as a thuggish writer
God bless the Cloud Atlas filmmakers for remembering that Tom Hanks used to be a rubbery comic actor and not simply an earnest award winner. Sure, he gets some straightforward dramatic notes to play in this film, but more often, Hanks is giving super-spirited, accented performances in crazy disguises, and it looks like he’s having a blast. That’s never more true than when Hanks pops up as Dermot Hoggins, a Brit author with a thing for gangster style (which could explain why he sort of resembles Ice T).

Asian Jim Sturgess
The Wachowskis walk their most daring high-wire act in the movie’s futuristic neo-Seoul section, which centers on cloned slave Sonmi-451. She’s played by South Korean actress Doona Bae, but the other characters in this era are mostly cast with the movie’s white stars in makeup and prosthetics that make them appear Asian. The best brought-off of these is Jim Sturgess as Sonmi’s savior and eventual romantic partner, since Sturgess gets weirdly hotter when made to seem like a vaguely Eurasian male model. It’s a good look for you, Jim! Keep it!

Doona Bae as a redhead
But is it as easy to take a Korean actor and make her into a red-headed Caucasian? Since this version of Bae appears in the new Cloud Atlas trailer, you can be the judge of that. 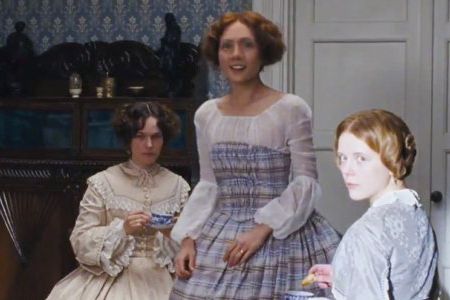 Ben Whishaw as a woman
The willowy Whishaw has a girlish figure already, so it seems inevitable that he’ll be asked to play a woman at some point in a movie like Cloud Atlas. But after spotting him in several incarnations — a goateed hippie here, a post-apocalyptic trash-heap version of David Arquette there — it’s still a hoot when the pretty Brit appears as Georgette, the alluring, soft-spoken wife of Hugh Grant (himself unrecognizable in old-age makeup).

Cannibal tribesman Hugh Grant
Grant doesn’t really have a primary role in Cloud Atlas, instead putting in cameo appearances in each era in disguises as different as an old man, a sex-mad Asian lout, and a face-painted cannibal tribesman. What led the filmmakers to Grant for these roles, we’ll never know, but suffice it to say that they perceived in all those stuttering British romcoms a range we never did.

Hugo Weaving as Nurse Noakes
The cleverest conceit in the way Cloud Atlas is put together — and it may be difficult for the Academy and audiences to fully grasp at first — is that sometimes, the filmmakers don’t seem to want the makeup to be incredibly convincing. Instead, with some of these outlandish characters, you’re meant to immediately grasp that this is a cast member playing wildly against type, to help sell the idea of reincarnation from the actor’s previous character or simply to garner an appreciative chuckle. For example, it’s no great stretch that the Wachowskis have cast their Matrix villain, Hugo Weaving, as a variety of baddies in this film, too, but it provokes the biggest smile when Weaving shows up as a mean Nurse Ratched type with droopy eyes and a full-breasted body. After Weaving had to wear that same Agent Smith drag through three Matrix films, how fun for him to cut loose and switch genders for a while.

back in the press 9:44 a.m.
13 Takeaways From Armie Hammer’s First Interview Since His Scandal He admitted to being emotionally abusive to his accusers, but claimed that all his sexual encounters were consensual.
gladia2r Yesterday at 11:38 p.m.
Normal Person Paul Mescal to Entertain Us in Gladiator 2 The Ridley Scott-directed sequel will release on November 22, 2024.
web of lies? Yesterday at 10:12 p.m.
Of All the Broadway Musicals for George Santos to Claim… He reportedly lied about producing the notorious flop Spider-Man: Turn Off the Dark.
overnights Yesterday at 9:00 p.m.
RuPaul’s Drag Race Recap: Golden Girl Groups The filler is gone, the competition is heating up, and the queens are fighting.
rip Yesterday at 7:30 p.m.
Melinda Dillon, A Christmas Story’s Mom, Dead at 83 The actress received Oscar nominations for her roles in Close Encounters of the Third Kind and Absence of Malice.
possessions Yesterday at 5:20 p.m.
Austin Butler’s Elvis Voice, Awards-Season Sweetheart, Is Out of a Job A moment of silence for the bit.
overnights Yesterday at 5:00 p.m.
Dear Edward Recap: The Odd and Peculiar While the title character is one of the least interesting of the bunch, Connie Britton’s Dee Dee is absolutely stealing the show.
vulture sports Yesterday at 4:08 p.m.
The Music Fan’s Guide to Super Bowl LVII Plan your chip breaks wisely.
trailer mix Yesterday at 3:50 p.m.
Outer Banks Season 3 Will Have the Pogues Poguing Around Poguelandia The new trailer is just the start of the treasure hunt.
1.5x speed Yesterday at 3:44 p.m.
What Does Spotify Want From Podcasts Now? A closer look at a head-spinning week in the audio industry.
vulture lists Yesterday at 3:00 p.m.
Every M. Night Shyamalan Movie, Ranked Making sense of the director’s tricky career.
explainers Yesterday at 2:45 p.m.
What the Great Netflix Password Crackdown Means for You Let’s talk about it.
overnights Yesterday at 2:34 p.m.
Dear Edward Recap: Good Night, Stupid Everyone is adjusting to their new normal. “Normal” being excruciating and debilitating grief.
grammys 2023 Yesterday at 2:34 p.m.
Beyoncé(’s Husband) to Perform at the 2023 Grammys Alongside DJ Khaled, Rick Ross, Lil Wayne, John Legend, and Fridayy.
close read Yesterday at 1:50 p.m.
The 1619 Project’s Standout Episode Resonates With Infuriating Timeliness A six-episode adaptation of the sprawling New York Times effort can’t help but feel scattered, but “Capitalism” is honed to a sharply incisive point.
vulture asks Yesterday at 1:32 p.m.
What Reality-TV Stars Should Star in The Traitors Season Two? From Monet X Change to Henry Louis Gates Jr., Vulture has a veritable smorgasbord of opinions.
endings Yesterday at 1:21 p.m.
Even Nicolas Winding Refn Doesn’t Know What Copenhagen Cowboy’s Ending Means “Sometimes getting everything is not the right answer.”
By Roxana Hadadi
sundance 2023 Yesterday at 12:55 p.m.
A Complete List of Films Sold at Sundance 2023 (and Their Price Tags) Sony Pictures Classics picked up mother-daughter drama The Persian Version.
no bars Yesterday at 12:02 p.m.
Jafar Panahi Has Been Released From Prison Following Hunger Strike The Iranian filmmaker protested his wrongful detention for 48 hours.
vulture 10x10 Yesterday at 12:00 p.m.
The Retreat Puzzle 27-Across, Four Letters: Color favored by Elle Woods.
More Stories