Last week, Fiona Apple was arrested for taking .01 pounds of hash and weed through a Homeland Security checkpoint in Sierra Blanca, Texas. The arrest raised a number of questions: Why doesn’t Fiona have her own weed carrier? What was that weird jacket she was wearing in the mugshot? And the most obvious: Why does anyone attempt to take illegal substances through a border stop? But upon learning the location of the arrest — a town in Texas where Willie Nelson, Snoop Dogg Lion, and Armie Hammer have all been busted for weed possession — we had another question: Why do any celebrities drive through Sierra Blanca anymore?

The short answer is that Sierra Blanca is on I-10, the only major interstate across Texas. The D.H.S. checkpoint in question is 30 miles north of the border, and anyone driving East-West — even drivers who have not actually been to Mexico — can be stopped for an involuntary inspection. Apple had a concert September 18 in Mesa, Arizona (just outside of Phoenix); her next concert was scheduled in Austin on September 20. I-10 is the most direct route between the two. It also runs through an infamous drug-smuggling trap with a sassy Sheriff’s Department and a website that was probably designed by Buddy Garrity. Surely, there is another option.

And so let us turn to Google Maps. Below is Fiona’s original route, along with two alternate routes proposed by that delightful drag-the-dot feature: 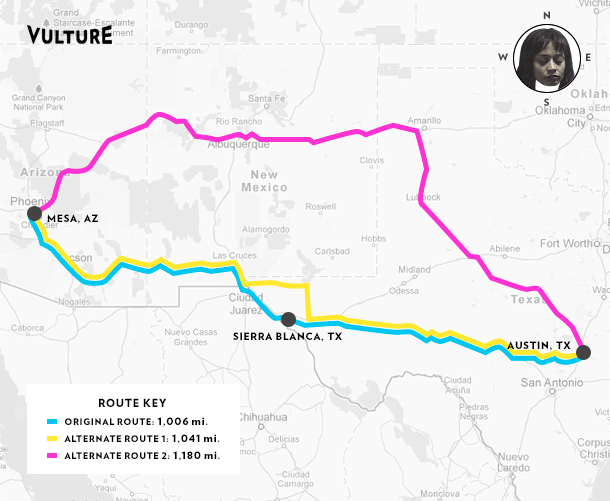 Admittedly, those routes are longer — by 50 and 170 miles, almost — and that distance might seem like a non-starter for touring musicians, who need to get to the next show as soon as possible. But exceptions are sometimes made, says Amy Davidson, a tour manager who is currently on the road with Florence + the Machine. “If there are two ways to go, sometimes they’ll opt to go 50 miles and take another highway, just in case.” Maybe even 150 miles might not be too far when the other option is shacking up down the hall from Rusty Fleming.

But are these routes actually viable? Doesn’t Google Maps lie sometimes, or send you down crazy dirt roads? To make sure, we asked Jimmy Tuley, a dispatcher at D&T Trucking in Texas, to verify the routes.  His findings:

Alternate Route No 1. (a 35-mile detour along U.S.-180 that feeds back onto I-10): “If you can avoid that, you want to avoid that. That’s not for a big vehicle. I mean, you can definitely take a truck down 180, but any time you have a vehicle of that size, you’re gonna want a main interstate.”

Alternate Route No. 2 (a 174 mile detour that goes through Albuquerque and Amarillo on I-40): “That’s a good route. Once you hit Amarillo, you’ll end up taking some smaller roads. Those are definitely not an issue. If you wanna stay away from [the Juarez/Sierra Blanca area], that’s the only real option.”

And so, in conclusion: If you are a touring musician with a taste for illicit substances, and you have to drive from the West Coast to Texas, do not drive down I-10 through Sierra Blanca! Schedule another concert in Albuquerque, and drive through there. (Or just throw the drugs out the window in El Paso. The choice is yours.)

Why Do Celebrities Drive Through Sierra Blanca?