Here at Vulture, we are pro-kissing. Sherlock and Watson, yes. Carrie and Brody on Homeland, yes. Carrie and Quinn on Homeland, also yes. TV is full of characters we wish would just smooch already. Here are some charts to help explain the perfect time for the eventual — destined! perfect! — lip locks. 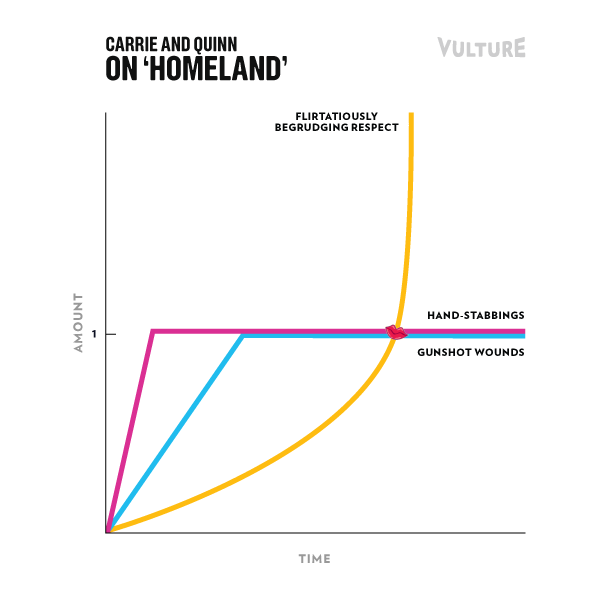 Homeland
She’s the ex-CIA officer with a murky record and a too personal attachment to the case. He’s the gruff, salty investigator who likes to play the bad cop. Together, Carrie and Quinn are slowly, slowly replacing Carrie and Brody as Homeland’s most should-they-shouldn’t-they couple. As soon as they have one full unit of begrudging respect, it’s time to kiss. 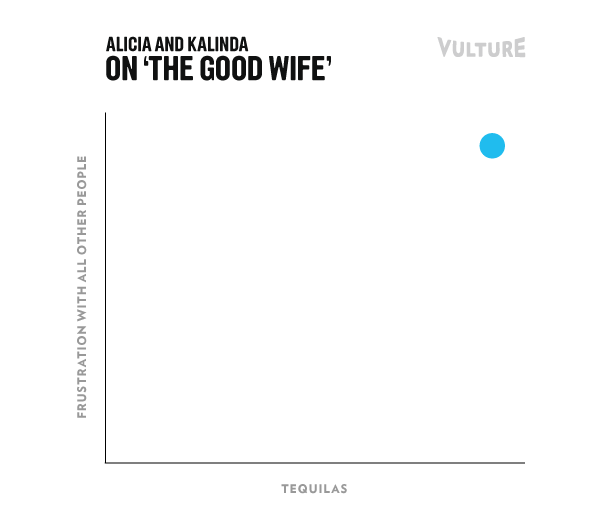 The Good Wife
It’s time. Things were too complicated for Alicia and Will, and Peter’s such a scumbag. Kalinda’s too closed off with her FBI girlfriend and gets in disturbing drag-out physical fights with her shitty husband. It’s staring you in the face, ladies! Get a few drinks and see where things go. 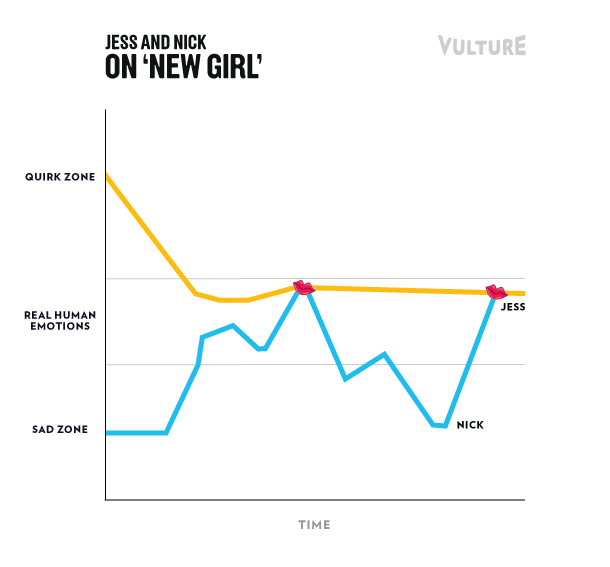 New Girl
Nick and Jess on New Girl are good for each other. Not in a romantic way, necessarily, but they rehabilitate one another — she by encouraging him to lead a more engaged life, and he by encouraging her to acknowledge the full spectrum of human emotions. They should have a series of what-are-we-doing kisses every so often, without ever really getting together. Ultimately, they’re better off as friends, but they need to get some of this sexual tension out of their systems. 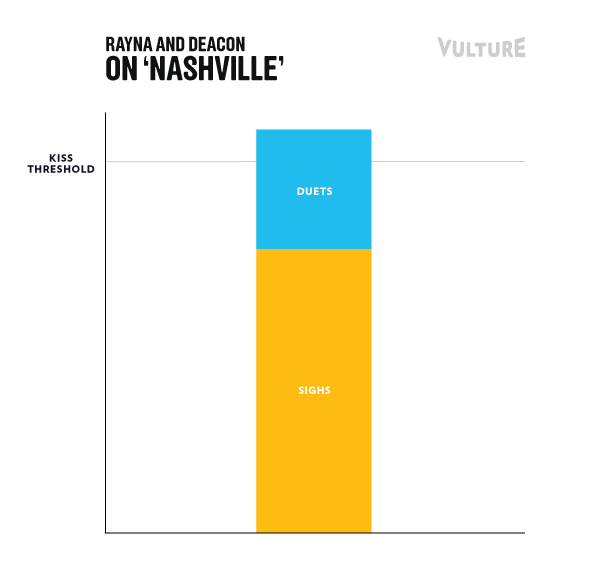 Nashville
You can only sigh and sing so much before we demand a kiss. Rayna and Deacon on Nashville, we cannot wait forever. 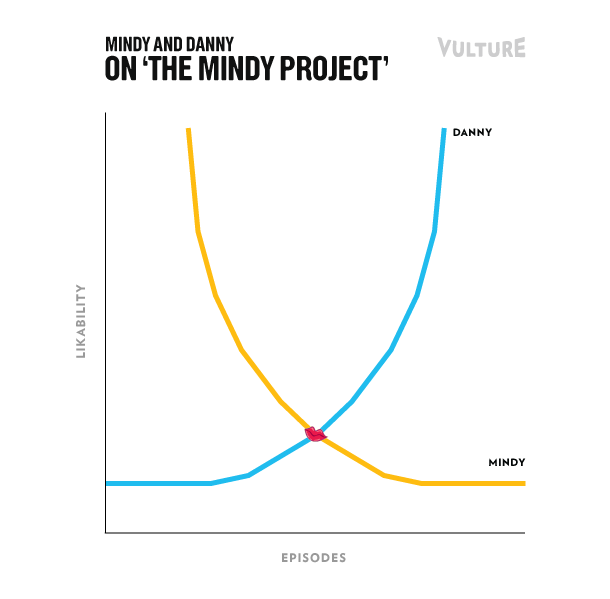 The Mindy Project
The Mindy Project spends a lot of time talking about rom-coms, yet it pretends like we don’t know the most popular romantic plot of all time: Antagonists realize they love each other. Mindy might be the series’ ostensible heroine, and Danny might be its resident grouch, but they’re on opposite affection trajectories right now. Just kiss, and let’s get this show on the road.

When TV Characters Should Kiss, in Chart Form

i'm in my bag 20 mins ago
Well, Beyoncé Finally Gave Us (and Tiffany & Co.) a Renaissance Visual She did say she’d feed us diamonds and pearls.
björk for dummies 20 mins ago
How to Get Into Fossora (If You Don’t Get Björk Yet) Fossora is strange, beautiful, and intimidating. Where should you start?
sleigh 12:32 p.m.
Lindsay Lohan Is Falling for Christmas, Literally Netflix, can we get a “Xanax” holiday remix?
respect the classics 12:11 p.m.
Bono to Sing Stories and Tell Songs on Surrender Book Tour With or without U2.
vulture 10x10 12:00 p.m.
The Rolling Stone Puzzle 21-Down, Five Letters: Stephen King’s home state.
celebs of crypto 11:40 a.m.
Kim Kardashian to Pay the SEC $1.26 Million for Doing Cryptocrime Oh, you’re a fan of “the law”? Name three laws about disclosing promotion of asset securities, then.
fire and blood 11:29 a.m.
Westeros Weddings Ranked by How Much Fun a Guest Would Have Some of these unions are just not worth the RSVP.
late night 10:59 a.m.
What Happens to The Daily Show After Trevor Noah Leaves? According to a production insider, “it isn’t going anywhere.”
maths 10:47 a.m.
Ed Sheeran to Give Us a Maths Lesson With the + - = ÷ x Tour Pronounced “the Mathematics Tour,” a press release emphasizes … multiple times.
chat room 10:27 a.m.
Shygirl Wanted to Make a Song Dedicated to the Female Form “I realized there aren’t that many cute songs that make me feel good about the vagina, you know?”
trailer mix 10:15 a.m.
Black Panther: Wakanda Forever Trailer: Danger Rushes In A new Black Panther takes the mantel to fight an aquatic threat, Namor.
best of 2022 9:00 a.m.
The Best TV Shows of the Year (So Far) A freshman series firing on all cylinders, auteurist comedies returning in peak form, and a highly original thriller are among 2022’s best offerings.
By Jen Chaney, Roxana Hadadi, and Kathryn VanArendonk
trials 8:00 a.m.
What to Know About Kevin Spacey’s Upcoming Trial He is accused of abusing a 14-year-old boy, actor Anthony Rapp.
midnights era 12:17 a.m.
Wait, Is Taylor Swift Just Giving Us Straight Answers? Holding out for a (anti-) hero.
overnights Yesterday at 11:01 p.m.
Interview With the Vampire Series-Premiere Recap: Let the Story Seduce You The first episode of AMC’s Anne Rice series has it all: Sex! Catholics! New Orleans! Mind control!
overnights Yesterday at 11:00 p.m.
American Gigolo Recap: You Pay Me So I Leave Gigolo Julian is back thanks to an injured dog, in case there was any doubt we’re supposed to think he’s a good guy.
rip Yesterday at 10:47 p.m.
Sacheen Littlefeather, Actress and Activist, Dead at 75 She famously refused Marlon Brando’s Oscar for him in 1973 and was blacklisted for it.
overnights Yesterday at 10:06 p.m.
The Walking Dead Midseason-Premiere Recap: Beginning of the End Intriguing opening tease aside, so far part three is idling when it should be revving up.
fire and blood Yesterday at 10:02 p.m.
Wow, It Kinda Sucks to Be a Velaryon Right Now, Doesn’t It? More money, more incest-caused problems!
overnights Yesterday at 10:02 p.m.
House of the Dragon Recap: Bastards and Broken Noses The various dispersed Targaryens descend on Driftmark, and bring with them their genetically endowed abilities to be uniquely awful.
More Stories