We polled 87 culture-makers (and appreciators) on everything from the year’s best movies and music to the superiority of certain superheroes and TV families. While our less-than-scientific process did reveal clear favorites (a certain catchy pop tune with the words “call” and “maybe”), we also uncovered unique interest in, among other things, the contestants on RuPaul’s Drag Race and crying on airplanes. 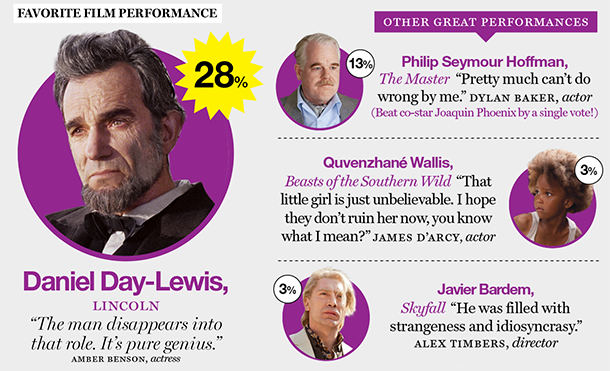 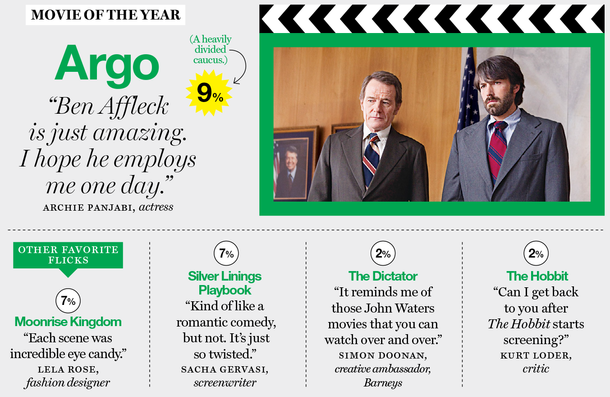 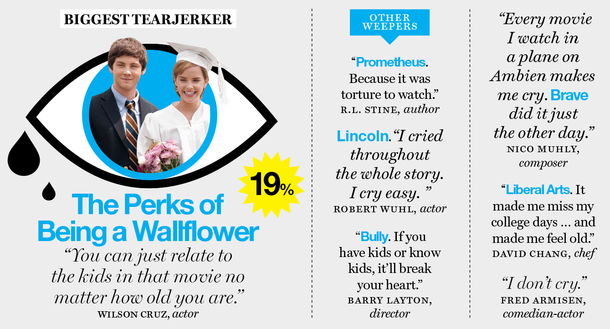 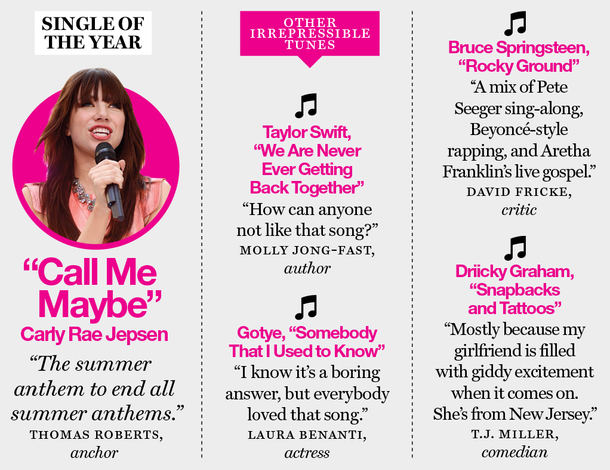 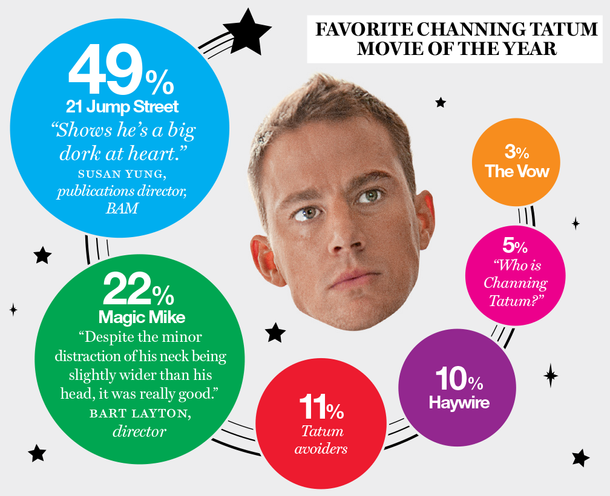 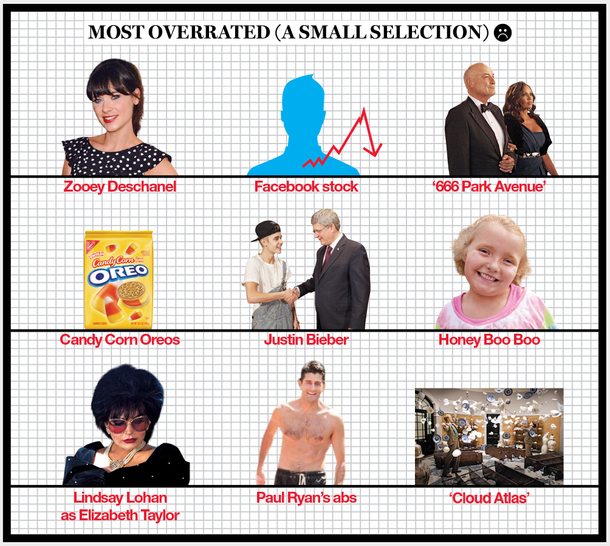 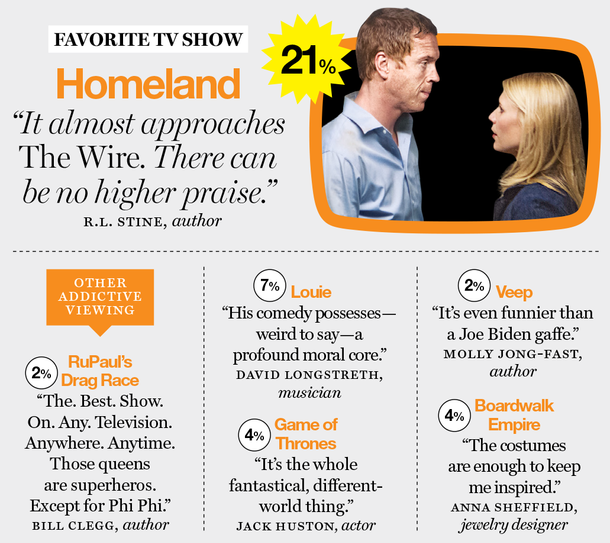 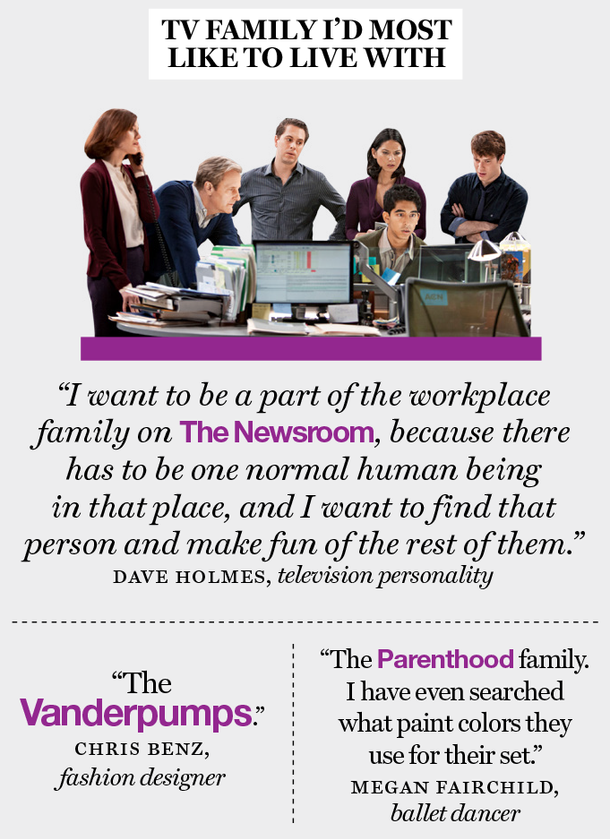 *This article originally appeared in the December 10, 2012 issue of New York Magazine.

the grub street diet 6:00 a.m.
Kevin Morby Depends on Noodle Soup “It’s a magical elixir for a vocalist.”
By Chris Crowley
extremely online 1:39 a.m.
Adele Thinks You’ll Dress Up as Her Next Halloween She calls the upcoming video for “I Drink Wine” the “campiest thing you’ll ever see.”
my trilogy is dropping 12:26 a.m.
Joshua Bassett Releases a Trilogy of Music Videos He asked fans to not send hate ahead of the songs’ release.
baldy connick jr. 12:10 a.m.
The Highs, Lows, and Whoas of Annie Live! So much kicking, several endings, and one very good dog.
my single is dropping 12:06 a.m.
Ariana Grande & Kid Cudi’s “Just Look Up” is Astronomical Reporting from Planet Yuh!
rust Yesterday at 10:27 p.m.
Alec Baldwin Says ‘Someone’ Is Responsible for the Rust Shooting “Someone is responsible for what happened… but I know it’s not me.”
overnights Yesterday at 10:00 p.m.
The Sex Lives of College Girls Recap: Nico’s Revenge Nico, Nico, Nico. That sneaky little fox.
overnights Yesterday at 8:13 p.m.
The Sex Lives of College Girls Recap: The Parents Are Not Alright Kimberly and Nico are … kind of sexy?
trailer mix Yesterday at 8:06 p.m.
Drag Race Is Coming Back Home for Season 14 After crisscrossing the globe for spinoffs, it’s home sweet werkroom once again.
the law Yesterday at 6:10 p.m.
Empire Extra Says Jussie Smollett ‘Wanted Me to Fake Beat Him Up’ Damning testimony paints a picture of a premeditated hoax.
overnights Yesterday at 5:30 p.m.
Gossip Girl Recap: Cancel Me If You Can The cancellation of Julien continues to make little sense.
backstories Yesterday at 5:22 p.m.
New Rugrats Is Making New ‘Traditions’ A modernized revival of the animated series is determined to honor the franchise’s legacy — including its beloved holiday specials.
brb indefinite hiatus Yesterday at 5:04 p.m.
Little Mix to Take a Little Break From Little Mix Sure, Jan.
overnights Yesterday at 4:36 p.m.
The Real Housewives: Ultimate Girls Trip Recap: That Friendship Has Sailed The efficiency with which these women craft and then squash drama on this trip is impressive.
awards season Yesterday at 4:21 p.m.
Licorice Pizza Awarded Best Film by National Board of Review The first big Oscar precursor has chosen its winners.
the law Yesterday at 3:27 p.m.
Meghan Markle Won’t Have to Testify Against Estranged Father An appeals court upheld her victory against U.K. tabloids for publishing a private letter.
😇 😇 Yesterday at 3:13 p.m.
A Long Talk With the Hot Gay Nuns of Benedetta Virginie Efira and Daphné Patakia discuss working alongside Paul Verhoeven, the feminist bona fides of their movie, and Virgin Mary dildos.
By Rachel Handler
buffering Yesterday at 3:02 p.m.
Did HBO Max Win the Year? We talked to Casey Bloys about the hot streaming service’s ups and downs.
vulture festival 2021 Yesterday at 2:52 p.m.
It’s the Most Wonderful Seth Rogen Interview of the Year  The multi-high-phenate talks pot, pots, and the Santa lie.
By Jesse David Fox
overnights Yesterday at 2:34 p.m.
Survivor Recap: Survivor Wants to Do the Right Thing Survivor finally seemings interested in showing the pressures that Black survivors feel playing the game.
More Stories