Quentin Tarantino is a maximalist. He stuffs his films with as much as he can: an allusion to spaghetti Westerns here, a hat tip to late French New Wave over there. That’s why his films are perfect for breaking down and analyzing. And is there any better medium for doing so than infographics? Nope. So in honor of the Christmas Day release of Django Unchained (read David Edelstein’s review here), we translated some of his films’ most iconic moments into handy-dandy graphs and charts. See exactly what the breakdown is of Reservoir Dogs who tip, how death-proof Stuntman Mike’s car is, how the Inglourious Basterds’ businesses are doing, and much more. 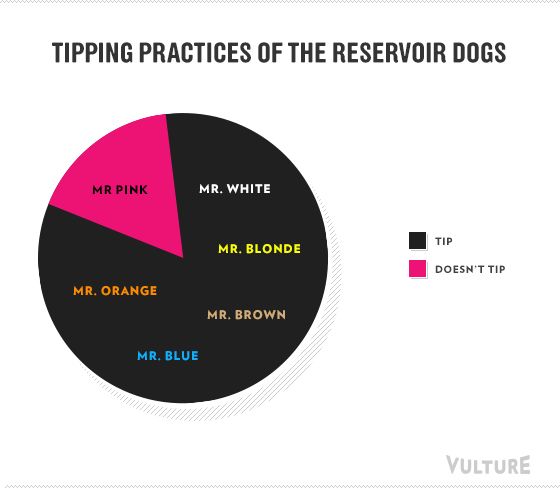 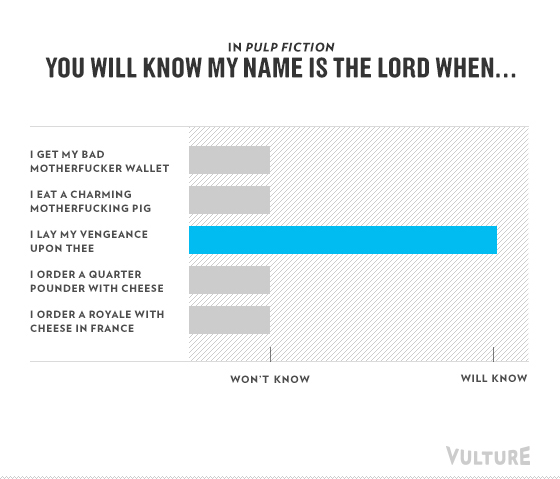 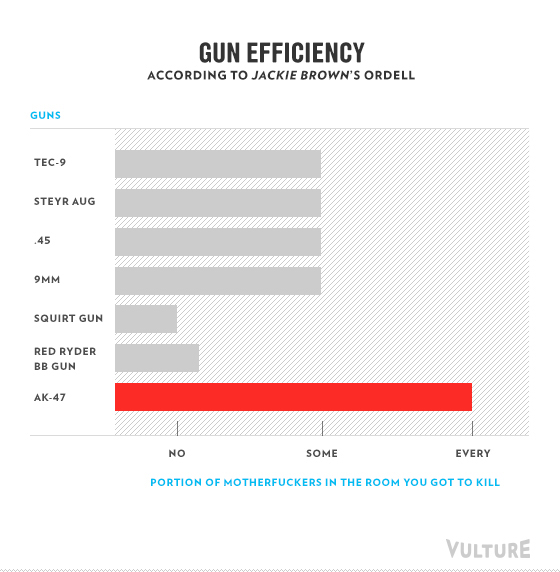 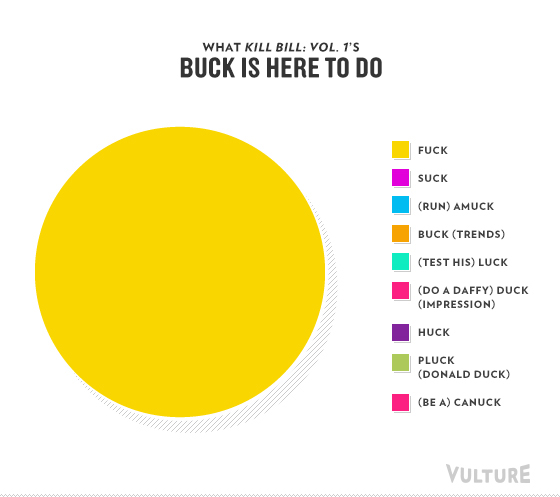 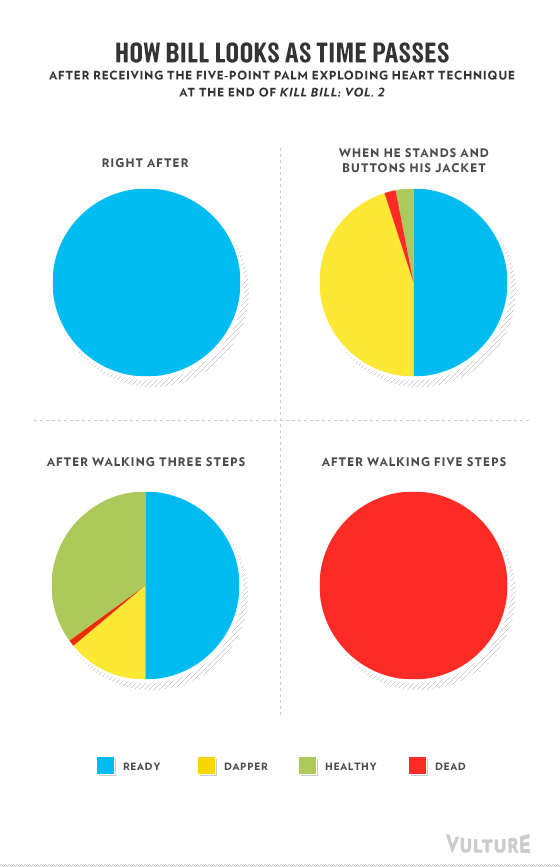 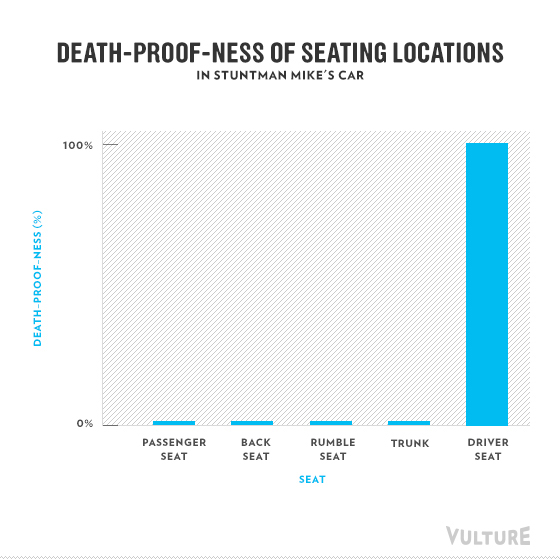 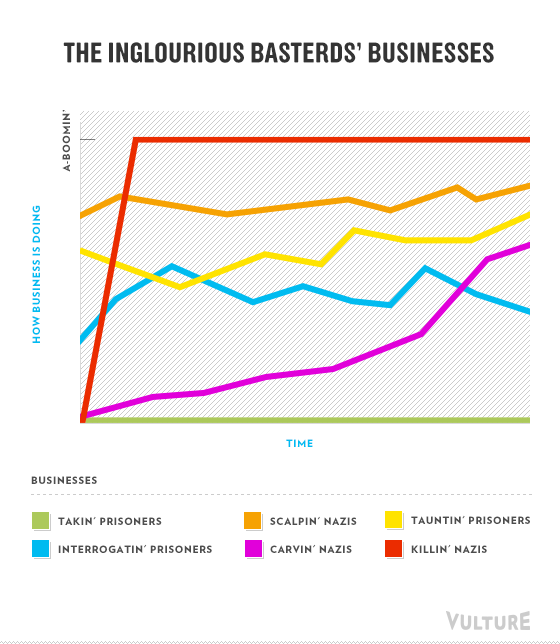 touch grass 11:01 a.m.
GloRilla Drops a PSA Watch out for them “Internet Trolls.”
chat room 11:00 a.m.
Raye’s First Album Was About Making Ugly Thoughts ‘Sound Beautiful’ The singer knows her long-awaited first album is “deep, innit?”
overnights 11:00 a.m.
Dear Edward Series-Premiere Recap: The Wreckage Be warned that Apple TV’s latest drama will leave you sobbing at some point.
sequels to prequels 10:27 a.m.
1923 Renewed for a Second Season Not Called 1924 The Duttons stay conniving through the centuries.
movie review 10:21 a.m.
Knock at the Cabin Is M. Night Shyamalan’s Best Film Since The Village Anchored by an incredible Dave Bautista performance, it’s a triumphant return to the sincerity and confidence of the director’s early work.
By Bilge Ebiri
this week in late night 10:18 a.m.
Dave Bautista’s Commitment to the Bit Won Late Night This Week Plus Natasha Lyonne Natasha Lyonne–ing out and Salma Hayek Pinault discussing the frailties of the human body.
overnights 10:00 a.m.
Shrinking Recap: Grieve Hard Jimmy’s new method of addressing his grief may effectively numb his pain, but his emotional bill will be due soon enough.
grammys 2023 10:00 a.m.
Which of Beyoncé’s Wins Have the Grammys Gotten Right? Ranking every one of her awards ahead of a potentially record-setting night.
shoplifting 1:59 a.m.
Euphoria Star Chloe Cherry Is Facing a Retail Theft Charge She has been accused of stealing a $28 blouse at a store in her hometown.
first impressions 12:59 a.m.
Look, Lauren London Wasn’t Sure About You People at First Either “Why would these two people really like each other?” she recalled thinking.
how fortunate Yesterday at 11:09 p.m.
Apparently Matthew McConaughey Took Career Advice From a Fortune Teller “I think I even accepted the offer the next day.”
overnights Yesterday at 9:01 p.m.
Ghosts Recap: The Ghost Trap 2000 Who ya gonna call when you need ghosts un-busted?
guestlists Yesterday at 8:34 p.m.
Which Celebs Love Ellen and Portia’s Love? From Kris Jenner to Prince Harry, here’s who attended the couple’s vow-renewal ceremony.
prison Yesterday at 6:30 p.m.
Jafar Panahi Goes on Hunger Strike to Protest Detention at Evin Prison Panahi should have been released to await a retrial on charges stemming from 2009’s Green Revolution.
gender inclusivity Yesterday at 4:25 p.m.
& Juliet Actor Opts Out of Gendered Tony Award Categories “I felt that I had no choice but to abstain from being considered for a nomination this season,” Justin David Sullivan wrote.
overnights Yesterday at 3:24 p.m.
The Real Housewives of Miami Recap: A Tale of the Gringos If Alexia is going to pretend to be offended to get an apology out of Nicole, then at least accept the damn apology.
buffering Yesterday at 2:48 p.m.
Could Peacock Maybe, Finally, Be Having a Moment? The shows are clicking, but will it be enough for the struggling streamer? Content chief Susan Rovner is betting on it.
renewals Yesterday at 1:55 p.m.
The Traitors Triples Down on Mess With a Second Season and Andy Cohen Reunion Looks like Peacock has a reality-TV hit on its hands.
vulture 10x10 Yesterday at 12:00 p.m.
The YHLQMDLG Puzzle 5-Across, Six Letters: 9-Down, Four Letters: Fletcher in Confess, Fletch.
into it Yesterday at 11:29 a.m.
Lil Rel Howery Supports the Academy’s Andrea Riseborough Investigation But she’s not the person he’d drop from the Best Actress race.
More Stories