Everyone is rightfully excited for Les Misérables, but there’s a nagging question: Does this Hollywood film need to be so French? Why couldn’t they America it up a little bit? We have class inequality. We have prostitutes. We have houses in need of masters. But where would we set a modern-day Les Miz (Les Mis)? We found the answer in Jean Valjean’s very prisoner number: 24601. These five numbers could be an American zip code, which sounded like fate! And sure enough, it is a zip, for Amonate, Virginia, a very small former mining town on the Virginia–West Virginia border. A long browse of street-view images of Amonate on Google Maps found, among the town’s many pleasant Southern homes, a bunch of abandoned buildings that would be perfect settings for iconic Les Miz numbers. Through the magic of Photoshop, we matched characters to these Amonate locales and you will find that the movie comes alive in a way that France (or at least French sets) could never hope to match. (Minor spoilers follow for those who have never seen the musical.)

Freshly a free man, Jean Valjean sees no way to acquire income, so he must steal from a church. How about this church on Amonate road? 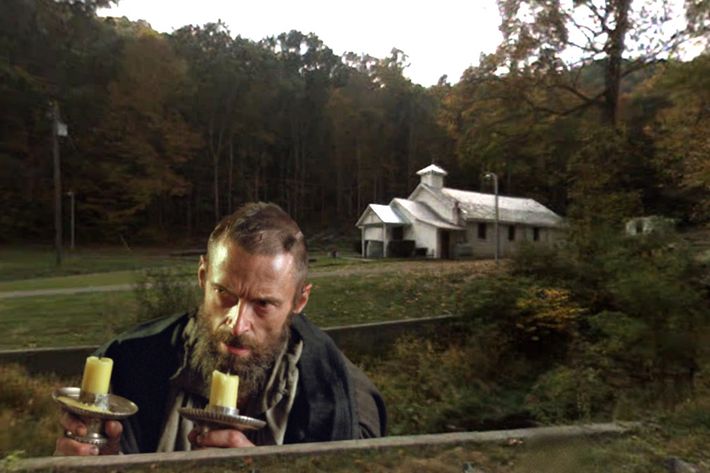 After being fired, abused, and shorn, Fatine has nothing. All she can do is sell her body and dream a dream, and this condemned building seems like a great place for that. 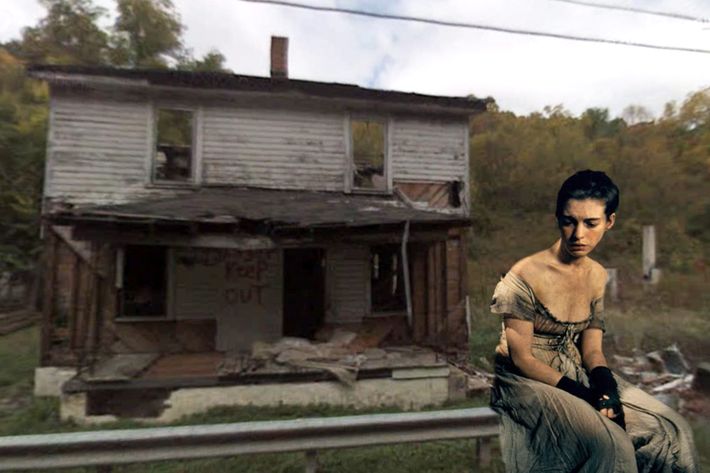 Valjean makes a promise to Fantine that he’ll raise Cosette, so he visits the Thénardiers in their colorful home (of which Mr. Thénardier is the master) and purchases the young girl from them. 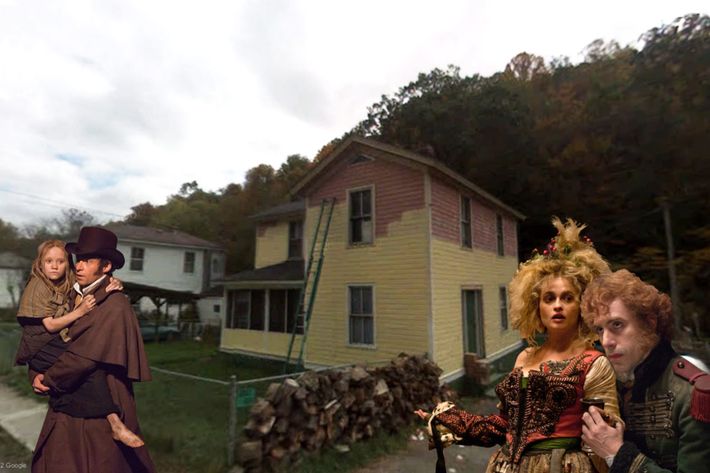 After chasing Valjean for years, Javert lets him go. With his life’s mission moot, his identity is lost, so he jumps off a bridge. Amonate has a bridge. 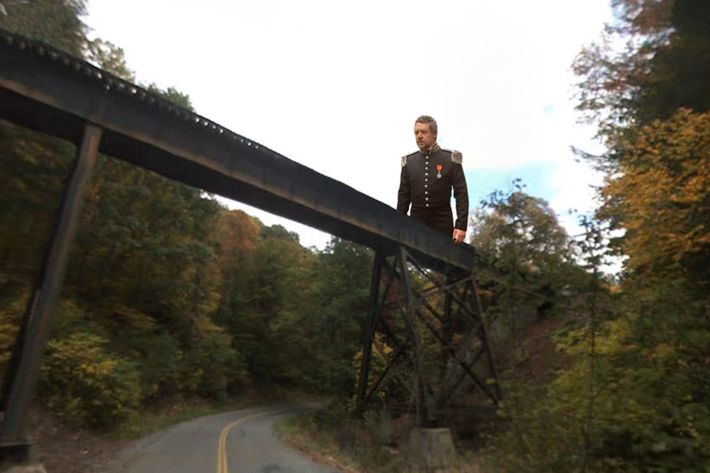 It’s Marius and Cosette’s wedding day, but Valjean has left without telling Cosette who he is and the sacrifices he has made. However, Marius buckles and tells Cosette what happened, so they run to find Valjean dying in church. How about this church? 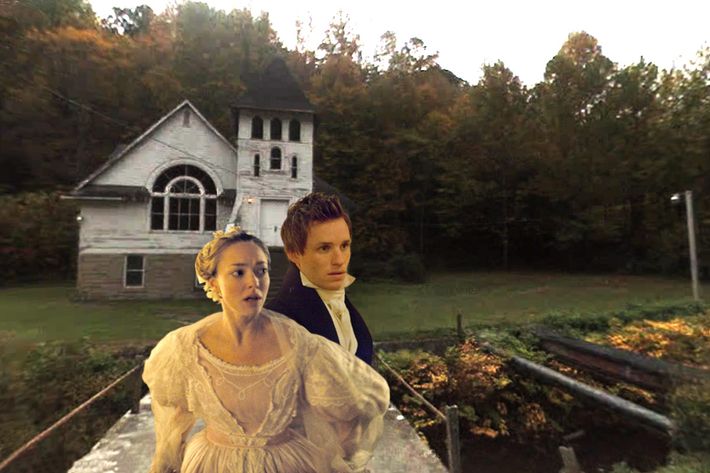 coming soon 11:02 p.m.
Get in Losers, Reneé Rapp Is Playing Regina George Again Joining Angourie Rice, Auli’i Cravalho, and Jaquel Spivey in Tina Fey’s Mean Girls movie musical.
overnights 11:01 p.m.
We’re Here Recap: Mormons and Meetings HBO’s traveling drag circus slays another army of noisy Facebookers.
trailer mix 8:02 p.m.
Woody Harrelson and Justin Theroux Are HBO’s White House Plumbers Up to no good in the trailer for Veep showrunner David Mandel’s new Watergate miniseries.
listening closely 6:12 p.m.
Everything SZA References on SOS (Including Herself) From Aaliyah to Kill Bill to Lower East Side hotels.
overnights 5:54 p.m.
South Side Season-Premiere Recap: Blue is a Flavor Credit scores really are just dark magic.
movie review 5:29 p.m.
Empire of Light Is Somber, Static, and Shallow Starring Olivia Colman, Micheal Ward, and Colin Firth, Sam Mendes’s film about mental illness and racism in early ’80s England is wan and lifeless.
By Bilge Ebiri
boston voice: wicked! 4:07 p.m.
Thank Goodness, the Wicked Movies Are on the Way I’m no “Sentimental Man,” but this newly filled out cast sounds “Wonderful.”
blue is the warmest christmas 4:00 p.m.
The Best Queer Holiday Movies to Make the Yuletide Gay Trope-y holiday romance isn’t just for the straights.
the law 3:56 p.m.
Backstreet Boys Holiday Special Canceled After Nick Carter Rape Allegation A woman has sued the Backstreet Boy for alleged rape.
overnights 3:46 p.m.
Slow Horses Recap: Acceptance Comes In Pour one out for Min Harper who died as he lived — making terrible errors in judgment.
follow friday 3:22 p.m.
Kate Banford Rightfully Misses Facebook Events We talked shop with the writer, comedian, and Elysian co-founder on Instagram Live.
awards szn 3:15 p.m.
AFI Promises Avatar 2 Is a Top 10 Movie of the Year The blue-person movie can’t stop, won’t stop winning.
what's next? 2:38 p.m.
With Wonder Woman 3 Canceled, the DC Extended Universe Could Be Very Different Here is a character-by-character breakdown of what could happen to the DCEU.
oscar futures 2:35 p.m.
Oscar Futures: Will The Whale Sink or Swim? Finally out this weekend, Darren Aronofsky’s film has been met with critical harpoons.
By Nate Jones
now streaming 2:31 p.m.
The 5 Best New Movies and TV Shows to Watch This Weekend Arrivederci, The White Lotus!
close reads 2:30 p.m.
Carol Is Not the Romance of Your Memes Todd Haynes’s drama gets embraced online in a manner that doesn’t jibe with the nature of its story.
holiday streaming 2:30 p.m.
The 16 Best Christmas Movies Streaming Right Now Elf, The Santa Clause, It’s a Wonderful Life, and more.
emo girls 2:05 p.m.
SZA Finally Unleashed Her Inner Rock Star “F2F” is one of her new album’s biggest, most exciting statements.
bye twitter 2:00 p.m.
All the Celebs Who Left Twitter “This place is a mess.”
character study 1:30 p.m.
How Ava Coleman Became Abbott Elementary’s Engineer of Chaos Scammer, step instructor, sorority girl: Janelle James made the role of a “precocious child trying to do the job of a principal” her own.
By Roxana Hadadi
More Stories