On last night’s Girls, we got a look inside Booth Jonathan’s apartment, where he took Marnie to end her dry spell. His idea of foreplay was incredibly bizarre and not particularly hot: He locked her inside a TV chamber and forced her to watch gross video footage (hyenas eating dead things, for example) on multiple TVs to the sounds of Duncan Sheik’s “Barely Breathing.” Marnie emerged shaken, impressed (“You’re so fucking talented”), and apparently horny, because the two were having X-shaped sex under the watchful eye of a sassy (no, sad!) mannequin in no time. Intrigued — but not aroused — Vulture asked Girls production designer Matt Munn for details about “Booth’s Booth” (a name coined by the show’s cast and crew). Here are ten weird facts we learned, including some backstory on Booth’s other freak-show artwork, like that blood-smeared dollhouse.

The booth was first imagined with flat-screen TVs.
“It started off being this very slick design — all flat-screen TVs in a regimented grid with plexi over it. So everything would seem very continuous and the outside would be like a white box. But when Jesse Peretz, the director of that episode, came on, he said, ‘Oh, when I read it, I was envisioning stacks of old TVs and seeing the backs.’ So that took it in another direction, and we started thinking of it more in terms of the rest of Booth’s artwork.”

There is a backstory for Booth Jonathan, and it involves skaters.
“We developed this idea about Booth that he was kind of this skater kid who could draw, who developed into an artist but never really went to art school; he was involved in a Larry Clark photo shoot at some point with a bunch of skater kids or whatever. And he was just the most engaging and interesting guy in that group, and he started to develop his own mystique. But he didn’t have any sort of … concept. He was just trying to be confrontational with everything he did. He made concept art with no concept. So that kind of evolved into his whole Childhood Death Games show that he was working on. And we found these very iconic elements of childhood, like the dollhouse, the Little Tikes cars that were broken down, the teddy bears. He had all these teddy bears that he was cutting open, in my mind to make some huge Frankenbear — and it was going to be horrific.”

Lena Dunham wanted footage of children having seizures to play on the screens.
“Basically, the script said, ‘He walks her into this chamber and there’s all these TVs playing disturbing images.’ I remember one of them was ‘kids having seizures.’ Eventually, we talked about it and Lena it was like, ‘I just want it to be disorienting, disturbing images.”’ So I went through and pulled a bunch of stock footage, like hyenas eating a corpse, dogs barking at people, babies crying, larva — anything we could think of in the art department that seemed either aggressive or really, really annoying; anything that would just make you ill at ease. At the same time, Lena was like, ‘Maybe one or two of them are, like, flowers in a field and oddly peaceful.’

And then, on top of that, we pulled together stuff that we had shot. Our producer Ilene Landress shot herself driving through the Holland Tunnel on her iPhone; we took footage on the Staten Island Ferry of the water getting churned up. We also got some footage of just flashing lights. It got to the point where I had to ask Lena to make sure Allison [Williams] wasn’t prone to seizures.”

There were about 30 TVs stacked onto four separate walls.
“There are lots of thrift stores that sell old working TVs — that’s what Williamsburg is good for. So we collected TVs within the art department, and we started arranging them in stacks. Some of them were little bitty, old Walkman kinds of things. Some of them were massive — I call them big-butt TVs. I got into the idea of turning some of them upside, turning some of them on their side, so it wasn’t just a straightforward arrangement. And then the cabinet TV became the way you go in and out. It was like, How do you get into it? Well, it should be some demeaning way! He would make her crawl on the floor to get into it! Building the whole thing took probably a week, to weld all the racks, get the TVs arranged, get them all fitting and stable. Each of the racks were on wheels, and we just rolled and locked them all together.”

The booth inadvertently conducted electricity.
“Once we put the racks together, we started to get weird interference; electricity was getting conducted from the metal racks to the TVs. So if you touched the racks, you could feel the electricity. And it started making the TVs do crazy, wavy things. We realized we had to ground the booth so the whole thing didn’t become one big electrical thing that could shock you when you touched it.”

You couldn’t see him, but there was a guy off to the side, feeding images to the TVs.
“I think we ended up with eight or nine different pieces of footage. Some of them were just straight footage, a lot of them were the loops that the graphic designer and I had created, loops that would fade from larva into a dog barking into open-heart surgery. And then we had a video playback guy come in and wire all the TVs up so we could send signals to them. He was right outside the booth with a rack of monitors.”

About that dollhouse: An entire family of dolls was killed there.
“There were two or three other art pieces called out in the script: One of them was a bicycle with knives sticking out of the seat. The other one … I think it was dolls being strangled. One of the thoughts we came up with was that we should get a dollhouse and make it look fucked up, like a horrible murder took place there. The entire family was killed. So we painted the outside to look very pretty, with yellows and blues. And then when you turn it around and look inside, it’s a demented, Manson Family–esque scene, with redrum on the walls. We found old dolls, and we dismembered them and had them bleeding down the stairs. They were mostly pulverized into nothingness. The scenics department really got into it. It was frightening.” 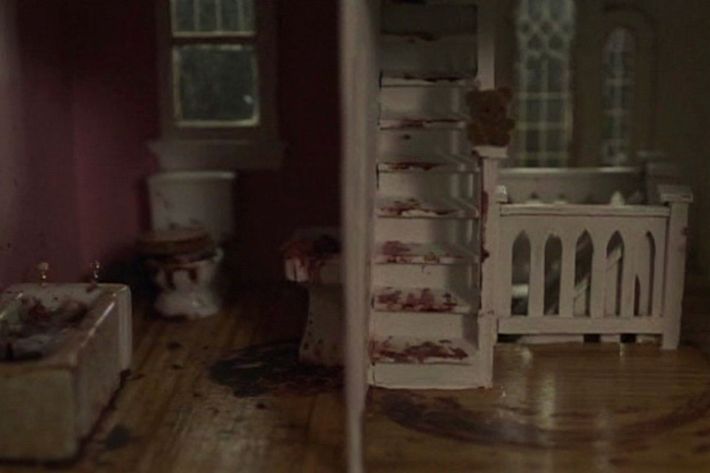 That sex doll was not in the script.
“My decorator found this really creepy child mannequin — it wasn’t in the script. We just set her by the bed as this weird thing that’s, like, Yeah, when Booth has sex, he sets this thing up to watch. That’s just the way he does things. A lot of this stuff, Jorma [Taccone, who plays Booth] and Lena and everybody came in and saw everything and were like, ‘Oh, let’s use that.’ We had a whole workstation set up for Booth with his teddy bears, Barbie heads in jars, doll parts suspended in liquid. We took all the beads off an abacus and put Barbie heads on it. Sort of mad-scientist stuff. And we set everything up, they came in there, and they used that as a springboard. They thought the dollhouse was awesome, so they just started improving dialogue around it.”

Duncan Sheik’s “Barely Breathing” was in the script.
“I never got an answer from Lena as to why, but I always thought it was the perfect song choice.”

The sex doll is now an art department mascot.
“The scenics took it after we shot that episode and put it up above their door holding a severed head or something. It just became this really creepy mascot. They may be very disturbed people.”

last night on late night 3:32 p.m.
J. Smith-Cameron Should Have Thrown Two Drinks in Kieran Culkin’s Face She employed a three-strike rule.
overnights 3:08 p.m.
Harley Quinn Recap: Swamp Cling It’s not easy being green … or, in Ivy’s case, accessing the green.
ask an expert 2:57 p.m.
Where Do Georgia Music Festivals Go From Here? Music Midtown in Atlanta was reportedly scrapped over a ruling that allowed guns during events on public property.
buffering 2:33 p.m.
Why Disney+ and Hulu Just Got a Lot More Expensive Less bang for more bucks.
behind the seams 2:30 p.m.
How Mrs. Harris Goes to Paris Captures Love at First Sight (With a Dress) Here, dresses act as scene partners and spark character growth, joy, resolve, and grief — which is a lot of weight to put on some tailored fabric.
By Rebecca Alter
overnights 2:30 p.m.
The Real Housewives of Dubai Recap: Diamonds Are Forever Off we go on yet another doomed Bravo girls’ weekend.
the law 2:29 p.m.
Britney Spears’s Lawyer Calls Kevin Federline’s Videos ‘Cruel’ Mathew Rosengart said Federline “undermined his own children.”
buzz! buzz! 2:24 p.m.
Van Lives! And Lauren Ambrose Will Play Her on Yellowjackets Season Two And Liv Hewson has been upped to a series reg. 🐝
overnights 2:05 p.m.
American Horror Stories Recap: Blood and Pus This episode made our recap writer barf!
vulture 10x10 1:04 p.m.
The Plant Puzzle 7-Down, Four Letters: Half of a Jim Carrey movie?
underrated 1:03 p.m.
The Surprising Queer Joy of D.E.B.S. Jenny Hagel breaks down why the 2004 comedy deserves more fans.
By Bethy Squires
found in translation 1:00 p.m.
The Historic Power of Prey Is in Your Ears “Finally, the light came on,” the film’s Comanche language expert says. Then came the hard part.
whodunnit 12:37 p.m.
Who Killed Bunny Folger on Only Murders in the Building? An assessment of the ten likeliest suspects.
into it 12:14 p.m.
Damon Lindelof Knows When to Wrap Up the Party “People don’t want things to end,” says the Lost and Watchmen showrunner. “I do.”
vmas 2022 12:01 p.m.
The MTV VMAs Stage Will Get Country Thanks to Kane Brown The lineup adds the first male country musician to perform on the show.
overnights 11:48 a.m.
The Resort Recap: The Second Half Is the Heartbreak “Do not go to pasaje. Go home.”
last night on late night 11:15 a.m.
Madonna Is Plotting Her Takeover of The Tonight Show First, the host’s chair. Next … the drum set?
essential roles 10:43 a.m.
Jon Bernthal Will Surprise You The best performances from Hollywood’s preeminent primal screamer.
overnights 10:30 a.m.
Locke & Key Series-Finale Recap: The Final Door This is the kind of show that had to give its characters a happy ending, right?
chat room 10:05 a.m.
Jamie Bower, Lord of the Underworld, Loves the Dark The Stranger Things actor’s brand-new song, “I Am,” isn’t too far from Vecna, but that’s not by design.
More Stories