2013 is already looking up: Vulture has learned that A24 Pictures will be releasing Harmony Korine’s cramazing Spring Breakers on March 22 in New York and Los Angeles, followed by a nationwide bow the following week. Need a refresher on the movie? (You should already have this committed to memory, but maybe you’re new.) Spring Breakers stars Selena Gomez, Vanessa Hudgens, Ashley Benson, and Rachel Korine as four bikini-clad teens who turn to a life of crime to finance their spring-break vacation, though things take an even darker turn when the girls get mixed up with James Franco’s cornrowed criminal Alien. This is also the movie where a shirtless Franco plays the Britney Spears song “Everytime” on a white piano at the beach as the girls dance around him wearing ski masks and toting shotguns. So, mark your calendars, basically. And here’s some further enticement: We’ve got the U.S. teaser poster for your perusal. It features Vanessa Hudgens, and it’s fluorescent as hell. Enjoy! 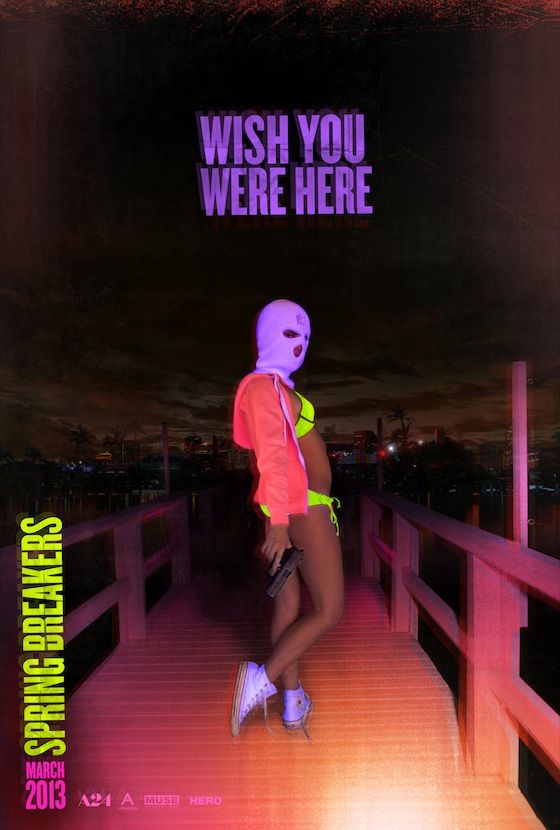 coming soon Yesterday at 11:09 p.m.
Robert Pattinson Bringing More Eyeliner to The Batman Part II He will face his next villain, makeup remover, in 2025.
can't stream my poker face Yesterday at 10:41 p.m.
Did You Wait to Watch Poker Face? It Might Cost You New Peacock subscribers will have to pay for the service and no we’re not bluffing.
overnights Yesterday at 10:01 p.m.
Below Deck Adventure Season-Finale Recap: Fjord Explorer The crew tries to get their act together for the last charter, but it’s too late.
the vulture spot Yesterday at 7:38 p.m.
Harry Hamlin and His Stylish Jackets Are Magical on Mayfair Witches  Despite his character not having any powers.
trailer mix Yesterday at 6:18 p.m.
We Support Women’s Right to Electrocute Toni Collette and Auli’i Cravalho don’t know what to do with The Power.
ask an expert Yesterday at 5:42 p.m.
Alec Baldwin is Officially Charged in Rust Shooting. Now What? “There’s just a huge disparity in the charges.”
oscars bad boy Yesterday at 5:28 p.m.
Will Smith Is Back for His Movie-Star Bag With Bad Boys 4 Smith and Martin Lawrence ride together, make movies that make money together.
for your consideration Yesterday at 5:15 p.m.
A Timeline of Andrea Riseborough’s Controversial Oscar Nomination Within seven days, Andrea Riseborough’s performance in To Leslie went from obscurity to the toast of Twitter. And all it took was a few famous fans.
By Nate Jones
crime Yesterday at 5:08 p.m.
Alec Baldwin Charged With ‘Directly’ Causing Rust Shooting Prosecutors allege “no less than a dozen” negligent acts by Baldwin even before Halyna Hutchins was shot.
vulture sports Yesterday at 4:48 p.m.
The Oscars Bestow a Bounty of Points Upon the Movies Fantasy League Awards season is hitting its stride, and so are the top MFL teams.
bravo encore Yesterday at 4:38 p.m.
What’s Going on With RHONY: Legacy? Is she “dead”?
gods and monsters Yesterday at 4:07 p.m.
Chapter 1: Everything We Know About the Future of the DC Universe Congrats to Viola Davis, who remains the most unscathed DC Universe actor.
2 king 2 hill Yesterday at 3:48 p.m.
Travel Back to Arlen in a New King of the Hill Reboot Hulu announced a revival of the beloved series on January 31.
timelines Yesterday at 3:10 p.m.
The Complete History of Ezra Miller’s Controversial Career From kidnapping allegations to a plea deal for unlawful trespassing to the DCEU’s master plan.
chat room Yesterday at 2:48 p.m.
Nelson Franklin Is Thankful He’s Not the ‘Uglier George Santos” Comedy’s go-to That Guy discusses appearing in — or auditioning for — most of your favorite sitcoms.
celebrity memoirs Yesterday at 2:14 p.m.
Pamela Anderson Knows Even a Memoir Can’t Tell All Though there are not many new revelations, ten stories stuck out.
essential episodes Yesterday at 2:02 p.m.
Columbo Is the Ultimate ‘Rich People Are Weird’ Show Peter Falk’s rumpled detective takes down lots of wealthy loonies.
sad gay representation Yesterday at 1:18 p.m.
The Last of Us Fans Are Screaming, Crying, Streaming Linda Ronstadt “Long Long Time” is running (back) up that chart.
sundance 2023 Yesterday at 1:04 p.m.
Sundance’s Year of Existential Crisis Yielded Back-to-Back Megadeals Insiders call this year’s Sundance a return to form, with several all-night bidding wars and multiple eight-figure deals.
By Chris Lee
funny videos of the month Yesterday at 1:00 p.m.
The Best Comedy Shorts of January 2023 Rounding up our favorite funny videos of the month.
By Luke Kelly-Clyne and Graham Techler
More Stories