My Week in New York: A Saturday newsletter from the Editors.
Sign Up
|
Photo: The Weinstein Company

Over the past month, Vulture’s Kyle Buchanan talked to many screenwriters of the best-reviewed scripts of the year about the toughest scenes they had to crack. But sometimes the most difficult part of screenwriting isn’t the writing — it’s the editing. After a long weekend of Dumpster diving, we have uncovered pages cut out of three of this year’s Oscar-nominated screenplays.* While fascinating examples of what might have been, their excision was probably ultimately a good idea. Read on to see Calvin Candie’s lost dinner-party debate from Django Unchained, a fiery bit of parliamentary procedure from Lincoln, and a bit of comic relief during Flight’s plane crash. 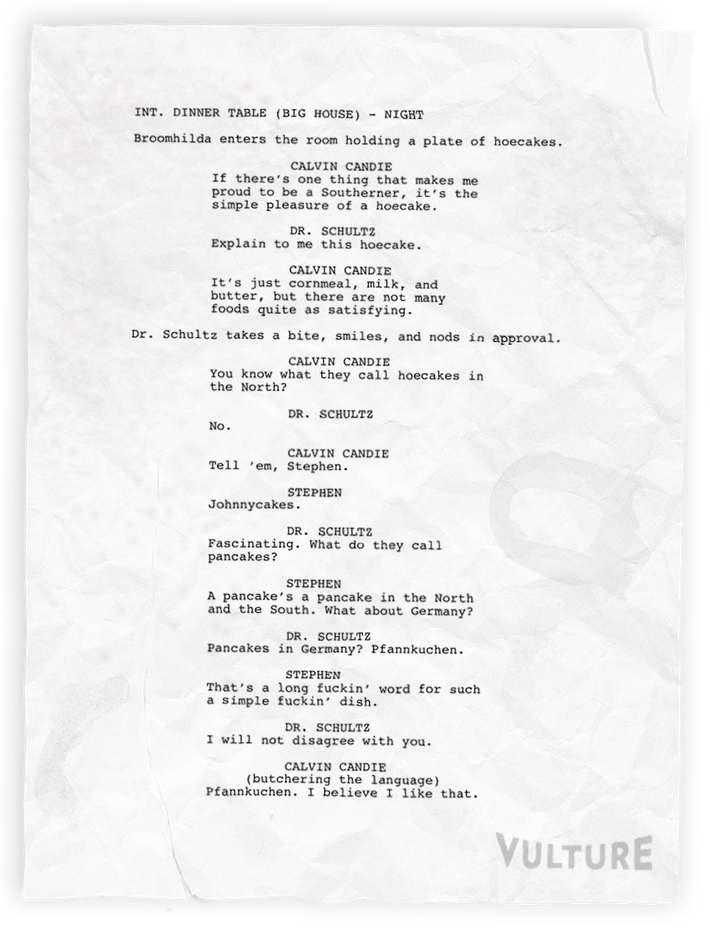 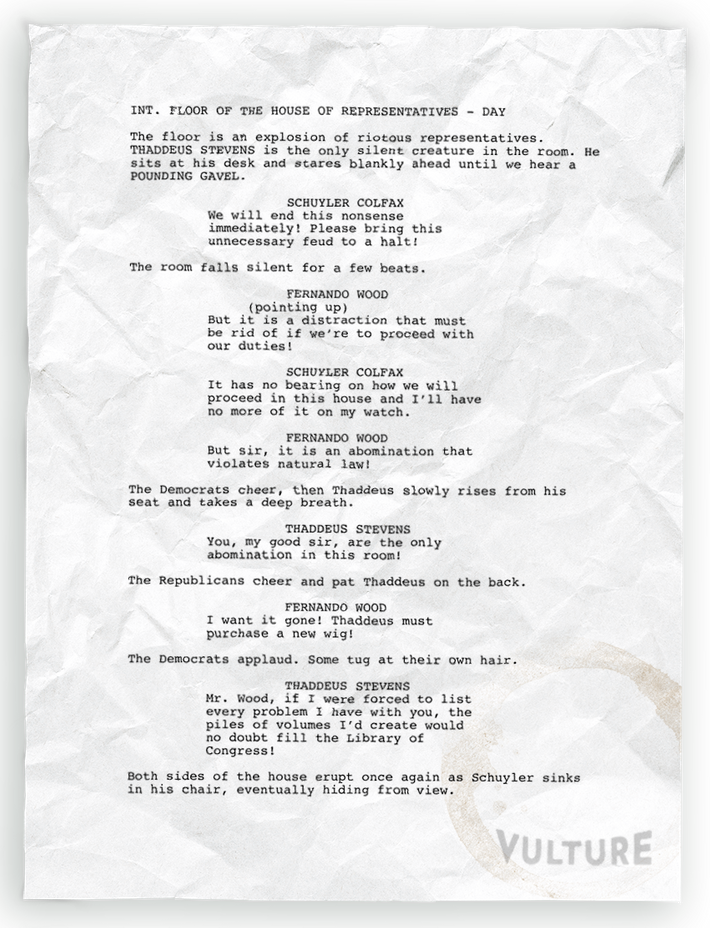 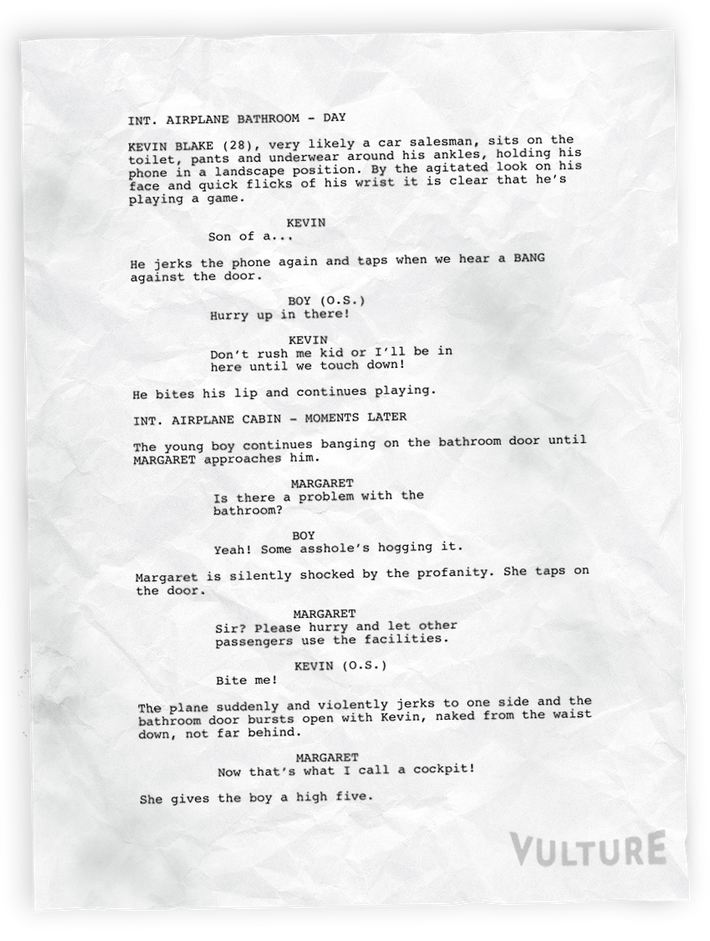 * It is quite possible that we were in the wrong Dumpster and have been had.

justice league 15 mins ago
Gal Gadot Says Joss Whedon ‘Threatened My Career’ During Justice League Reshoots The actress says the director claimed he would “make my career miserable.”
overnights 10:00 p.m.
The Nevers Recap: Penny and the B-Sides A much tidier episode than we’ve come to expect offers a rewarding glimpse into what makes Amalia’s first lieutenant tick.
apologies 8:57 p.m.
LaKeith Stanfield Apologizes for Anti-Semitic Clubhouse Chat Room “I unconditionally apologize for what went on in that chat room, and for allowing my presence there to give a platform to hate speech.”
snl 7:18 p.m.
Kate McKinnon Gives Kate Winslet a Run for Her Wawa With SNL’s Mare of Easttown Youse guys won’t believe this: There’s been another murdur.
ziwe 3:47 p.m.
Watch Ziwe’s Cool Animated Theme Song Before the Series Premiere Part Daria, part The Nanny, all Ziwe.
snl 2:52 p.m.
SpaceX Is Such a Wreck That Only Pete Davidson’s Chad Can Save It on SNL “Well, I did say people are gonna die!”
waaaahhh 1:39 p.m.
Elon Musk and Grimes Did Wario/Princess Peach Roleplay on National Television A profound silence has entered the chat.
ego fan club 11:34 a.m.
Last Night’s Saturday Night Live Belonged to Ego Nwodim’s Sad Disney Mom Elon who?
overnights 11:18 a.m.
Saturday Night Live Recap: The Dogefather Cops to the Hustle Elon Musk’s hosting gig may have generated discussion, but generating laughter, well, that’s another story.
snl 2:15 a.m.
SNL Understands Your Post-Quarantine Social Anxiety “It’s such a crazy time right now.”
snl 1:50 a.m.
Everybody and Their Mother Is in This Week’s SNL Cold Open Cute!
snl 12:56 a.m.
Elon Musk’s SNL Monologue Commits Dan Aykroyd Erasure “Did you think I was also going to be a chill, normal dude?”
the industry Yesterday at 9:48 p.m.
Scarlett Johansson Speaks Out Against ‘Sexist’ HFPA She called out “sexist questions and remarks by certain HFPA members that bordered on sexual harassment.”
my single is dropping Yesterday at 3:08 p.m.
Joshua Bassett Flaunts His Driver’s License in ‘Feel Something’ Music Video Not a red light or stop sign in sight.
r.i.p. Yesterday at 1:54 p.m.
Tawny Kitaen, Whitesnake Music-Video Star, Is Dead at 59 She starred opposite Tom Hanks in Bachelor Party.
princess Yesterday at 12:56 p.m.
Professional Mermaid Halle Bailey Adopted a Cat Named Poseidon New celebrity pet dropped!
casting Yesterday at 12:29 p.m.
Mj Rodriguez Joins the Cast of Maya Rudolph’s Upcoming Apple Comedy When TV closes a door, it opens a window. And sometimes, if you’re lucky, Maya Rudolph is in that window.
overnights Yesterday at 10:00 a.m.
RuPaul’s Drag Race Down Under Recap: A Dingo Ate My Snitch Game A fairly heinous Snatch Game levels the playing field and turns this into any queen’s game.
lawsuits May 7, 2021
Daily Mail Argues Nothing Defamatory About Buying Booze, Dating Jane Krakowski Despite what MyPillow CEO Mike Lindell wants to argue.
uncanny May 7, 2021
Steel Yourself for Lily James and Sebastian Stan’s First Pam & Tommy Pics The ’90s was a much more nipple-ring-focused decade, wasn’t it?
More Stories