Welcome to Vulture’s Sitcom Smackdown, a bracket that will decide the best sitcom of the past 30 years. Each day, a different top writer (judges include authors A.J. Jacobs, Heather Havrilesky, and Steve Almond, The Shield and Terriers creator Shawn Ryan, and critic Ken Tucker) will determine the winner of one bracket battle, deliberating between two powerfully hilarious modern TV comedies that have reinvented the form in some way. The field will narrow until only two finalists remain on March 18, and New York Magazine TV critic Matt Zoller Seitz will determine the ultimate winner. Read our explanation of how we decided our sixteen comic contestants here, and follow the bracket below. We’ll be updating it every day when a new winner is decided; simply click on the victor to read its judge’s rationale. Don’t agree with the decision? We’re holding a shadow readers-poll bracket on our Facebook page: Make sure to visit there to register your own laughter preferences. And now to the battle! 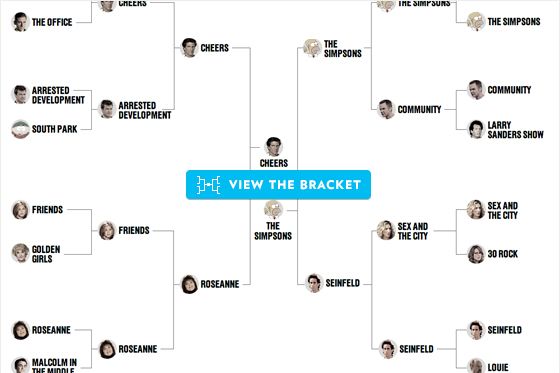 How did we pick our 16 contestants?

Round One: Cheers vs. The Office

Round One: Arrested Development vs. South Park

Round One: Friends vs. The Golden Girls

Round One: Roseanne vs. Malcolm in the Middle

Round One: The Cosby Show vs. The Simpsons

Round One: Community Vs. The Larry Sanders Show

Round One: Seinfeld vs. Louie

Quarterfinals: Community vs. The Simpsons

Quarterfinals: Sex and the City vs. Seinfeld

Semifinals: Seinfeld vs. The Simpsons