It’s funny that just two months ago we didn’t know who the Tennessee Kids were. Then Justin Timberlake showed up at the Grammys and there they were, having a ball, like we’ve actually been waiting seven years to see them play music. They’re obviously musicians for hire, but they don’t act like it. Some say JT is aping Bruno Mars, Janelle Monae, Mayer Hawthorne, or Sharon Jones, and maybe he is (though they’re all actually aping sixties/seventies soul acts, so who cares), but the Tennessee Kids are just better — more enthusiastic to a degree that suggests they really care about the music or get paid insanely well. Either way, the result is an infectious excitement. Screw JT and Jay-Z, we can’t wait to see them tour stadiums together. They sing along, dance, constantly mug to the camera: Oh, how we love them. And there is no better tribute than a GIF tribute, because a GIF tribute literally doesnt stop. 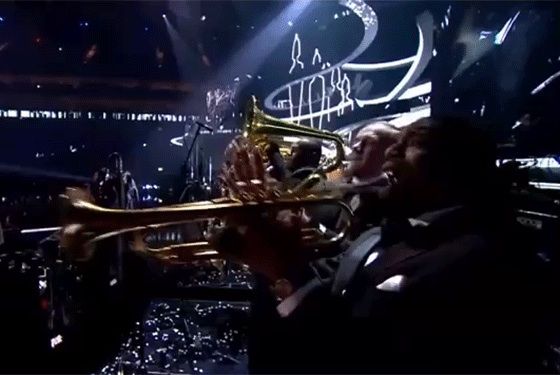