Continuing our ongoing Archer series, executive producer Matt Thompson gives Vulture the lowdown on each episode’s inside jokes and obscure references. In last night’s installment, “Sea Tunt: Part 1,” Cheryl’s brother Cecil turns up to escort the gang to the Bermuda Triangle (and assess his sister’s mental state). Here, Thompson tells us about the fan-made Tumblr that helped them recruit Mad Men star Jon Hamm, and why he thought it was cool to have Cheryl disparage John Williams.

Jon Hamm
Because our show is so reality-based, (besides the thousands of bullets and no one getting killed), the cast is always asked who would play their characters in a live-action version. Almost all of them say themselves. But H. Jon Benjamin is always like, “Well, I’d obviously be wrong for it, but if I had to pick someone else, I’d pick Jon Hamm. Because he’s funny, he gets it, he’s handsome, and he’s got a big voice.” So we’d been looking for something to put Jon Hamm in. Captain Murphy was the best possible thing I could have. At least a small portion of people on the Internet loved him at one time years ago, and we love Captain Murphy so much that when the voice actor died, we sent the character off to space because we didn’t want anyone else to do it. 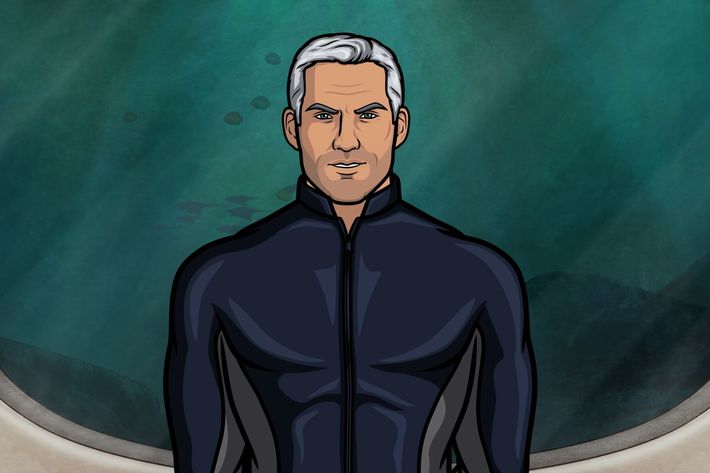 The other cool thing is I showed Jon Hamm’s team this Tumblr account, Sterling Draper Archer Pryce, which is just amazingly, phenomenally funny, and it helped me convince them that he should do it. It’s done by this really cool girl from New Orleans, and what she does is put lines from Archer over Mad Men characters. It’s fantastic. We basically said that if this Tumblr doesn’t convince you that the Internet wants to see you in an episode of Archer, I don’t know what will. Jon was super down with it. The amount of money we paid him is probably equal to half a second’s work on Mad Men, and he did it on a weekend while he was filming the new season. It was pretty cool of him.

Riptide
Riptide was the great, old, stupid P.I. show from the eighties with that giant helicopter. That’s why Pam refers to Cecil’s as “that giant Riptide-looking bastard.” 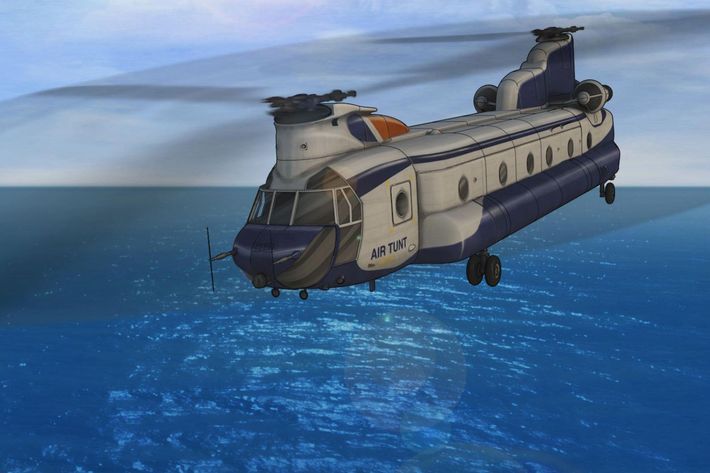 “Shut Up, John Williams”
This is my favorite thing in the episode. On one hand, we’re setting up the fact that Cheryl is crazy and maybe her brother does need to take control of her. So she hears this music that no one else can. But the payoff of the joke is when Cecil introduces Captain Murphy: The music plays, we go to a close-up, and then Cheryl goes, “Oh my God! Please tell me you guys heard that!” So yes, she’s crazy, but also, guys, CAPTAIN MURPHY!!! 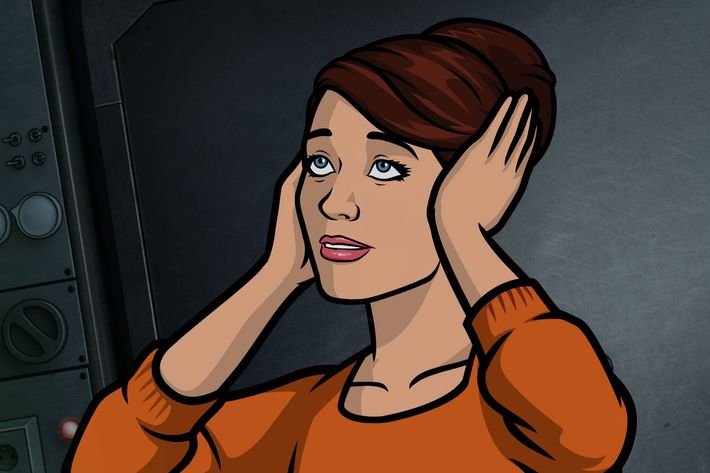 “In the immortal words of Jeremy Bentham … ”
So Cecil is a philanthropist humanitarian and as such he would have been familiar with Jeremy Bentham who was a philosopher from the 1800s. I didn’t know a lot about him, so when it was referenced, it was like, Thanks, Adam, now I have something to look up. He’s responsible for all these things we take for granted today, like separation of church and state, freedom of expression, equal rights for women, etc. So the line Cecil was going to quote was, “The sad truth is that it is the greatest happiness of the greatest number that is the measure of right and wrong.” Cecil’s trying to talk about the greater good, and Mallory is cutting him off saying, Fuck it, I’m just going to kill him. That’s just Adam going deep into his character. Character development in a silly cartoon show. He cuts off the line because he doesn’t want to bore you, but just by throwing in Jeremy Bentham you know Cecil’s heart is in the right place. There’s some question in the episode if he’s a bad or good guy. Citing Jeremy Bentham speaks to his character, like maybe he is really a humanitarian and he’s not just trying to rip his sister off.

The Sound of Crab Sticks
We wanted Amber Nash [who provides Pam’s voice] to sound like she was eating those crab sticks the whole time, but we didn’t bring anything for her to eat that day. Instead, we went to the kitchen of the recording studio and they had this huge container of cheese puffs. She had to do a lot of takes because she’d stuff her cheeks full of them, which would make her choke, which gave her the giggle. She looked like a chipmunk, and she kept putting her hands up against the glass of the studio so they were stained with all of this cheese. I was afraid she was going to die. 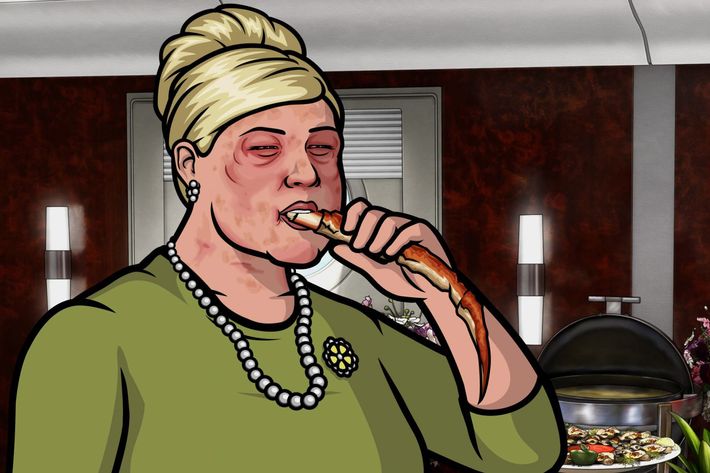 trailer mix 7 mins ago
Peacock’s New Series Paul T. Goldman Looks Weird As Hell It’s a ten-year passion project by Borat Subsequent Moviefilm director Jason Woliner.
power 10:45 a.m.
Brittney Griner Has Been Released From Russian Detention The WNBA star was freed as part of a prisoner swap.
health updates 9:34 a.m.
Celine Dion Shares Rare Diagnosis, Postpones Tour The 54-year-old is living with stiff-person syndrome, which affects around one in a million people.
overnights 9:03 a.m.
Gossip Girl Recap: Exhibition at the Guggenheim Don’t spoon-feed us lessons on friendship. It’s Gossip Girl, so let’s focus on the gossip!
best of 2022 9:00 a.m.
The Best Video Games of 2022 In a year devoid of many major blockbusters, eccentric titles had their time to shine.
cancellations? 1:38 a.m.
Wait, Did Gal Gadot Jinx Wonder Woman 3? A day after she said that she was excited to share Wonder Woman’s “next chapter,” the movie is reportedly no longer moving forward.
trust me Yesterday at 11:51 p.m.
Black Adam Didn’t Do That Bad, Says Black Adam Star the Rock He said he confirmed with financiers that the movie will actually make a profit.
freaky friday Yesterday at 10:08 p.m.
Just Imagine the ‘All Too Well’ Short Film (Guillermo’s Version) Taylor Swift would like to swap places with Guillermo del Toro for a day.
overnights Yesterday at 9:07 p.m.
The Real Housewives of Salt Lake City Recap: Charcuterie Overboard People in glass houses shouldn’t throw shoes.
autopsy Yesterday at 8:13 p.m.
Anne Heche Wasn’t Drunk or High During Car Crash, Coroner Says Her official cause of death has been determined to be inhalation and thermal injuries.
let's go party Yesterday at 5:52 p.m.
Greta Gerwig’s Barbie World Keeps Getting Bigger Ken we talk about Ryan Gosling for a sec?
boston voice: wicked! Yesterday at 5:49 p.m.
Thank Goodness, the Wicked Movies Are on the Way What is this feeling? Oh, yeah, excitement.
alien superstar Yesterday at 4:52 p.m.
Avatar 2 Will Show Us the Way of the Weeknd His song for The Way of Water soundtrack drops December 15.
news from shondaland Yesterday at 3:29 p.m.
Grey’s Anatomy Scammer Elisabeth Finch Wants to Write on Handmaid’s Tale Next After admitting she “never had any form of cancer.”
buzz! buzz! Yesterday at 3:04 p.m.
It’s Almost Yellowjackets Season Citizen detectives, there’ll be a break in the case on March 24.
1.5x speed Yesterday at 2:17 p.m.
Bad Men, Weird L.A., and 8 More Podcasts Worth Checking Out Welcome to the Night Vale team’s latest world.
dolls kill Yesterday at 2:09 p.m.
Robot Renesmee Hits Some Choreo in M3gan Bolstered by her viral success, M3gan is coming for your necks, your wigs, and an innocent old woman.
gma3 goss: what you need to know Yesterday at 2:08 p.m.
Every Detail of T.J. Holmes and Amy Robach’s GMA3 Drama in Chronological Order There has been an embarrassment (and we do mean that word) of detail.
sundance 2023 Yesterday at 1:01 p.m.
Cat Person Has a Date at Sundance Film Festival 2023 As part of the lineup for the in-person and online programs.
real boys Yesterday at 1:00 p.m.
Pinocchios, Ranked What is it about this little wooden boy that’s resonated for 150 years?
More Stories