Continuing our ongoing Archer series, executive producer Matt Thompson gives Vulture the lowdown on each episode’s inside jokes and obscure references. In last night’s installment, “The Papal Chase,” Archer must rescue the Pope from an assassination plot. Here, Thompson tells us about bubble cars, Guido Sarducci, and that blink-and-you-missed-it Sealab shout-out.

Father Guido Sarducci
At one point, Pam calls Archer Father Guido Sardouchebag. It’s not an obscure reference if you’ve been around for a while. Father Guido Sarducci is the No. 1 most recurring character ever to appear on Saturday Night Live. In this episode, Archer looks exactly like him. Basically, he’s a Catholic priest who serves as the in-house rock critic for the Vatican.

The BMW Isetta
We are very cognizant of the look of the show, especially with respect to guns and cars. We cast guns and cars. The cars in our show have personalities. Krieger has his van. Lana had that kick-ass Ferrari GTO for awhile. Sterling has his Dodge Challenger or his El Camino… In this episode, our art directors found the silliest car I’ve ever seen in my life. I didn’t know it existed. It’s the BMW Isetta, pretty popular in the 50s, especially in Europe. It’s basically a motorcycle engine they put four wheels on and called the bubble car. There are no side doors, there’s only a front door and it opens across the whole car, and if you’ll notice the steering wheel is on the door. If you’ve been in a wreck, the actual design and plan of the car is to escape from the sunroof. We wanted you to feel like the gang was in something very perishable and small during the chase. 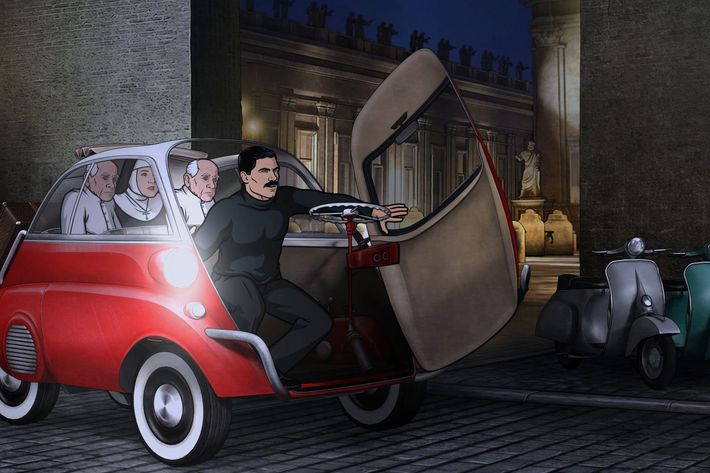 The Cardinal
That was Rene Auberjonois. He has played other characters for us before. He was the German assassin Mannfred, who never died, by the way, from season one (“Dial M for Mother” and “Killing Utne”). People might remember him in M*A*S*H and Deep Space Nine. We call him whenever we want a cool accent because he’s kind of grown up all over the planet. 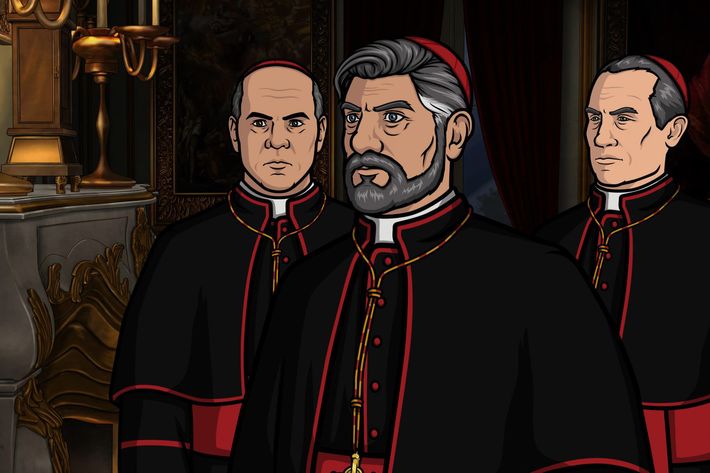 Sealab Headline
There have been hints in the last four or five episodes about us doing something with Sealab 2021 [the 2001 Adult Swim series created by both Thompson and Adam Reed]. The one in this episode went by very fast. We’d been talking about doing something at the very start of the year with the show, but we weren’t sure what. There’s a lot of legal issues that go into it because we have no rights to that show. Cartoon Network owns it. What I can tell you is that you’re going to see a lot of nods to it in our two-part season finale. People who know Sealab are going to be very pleased. 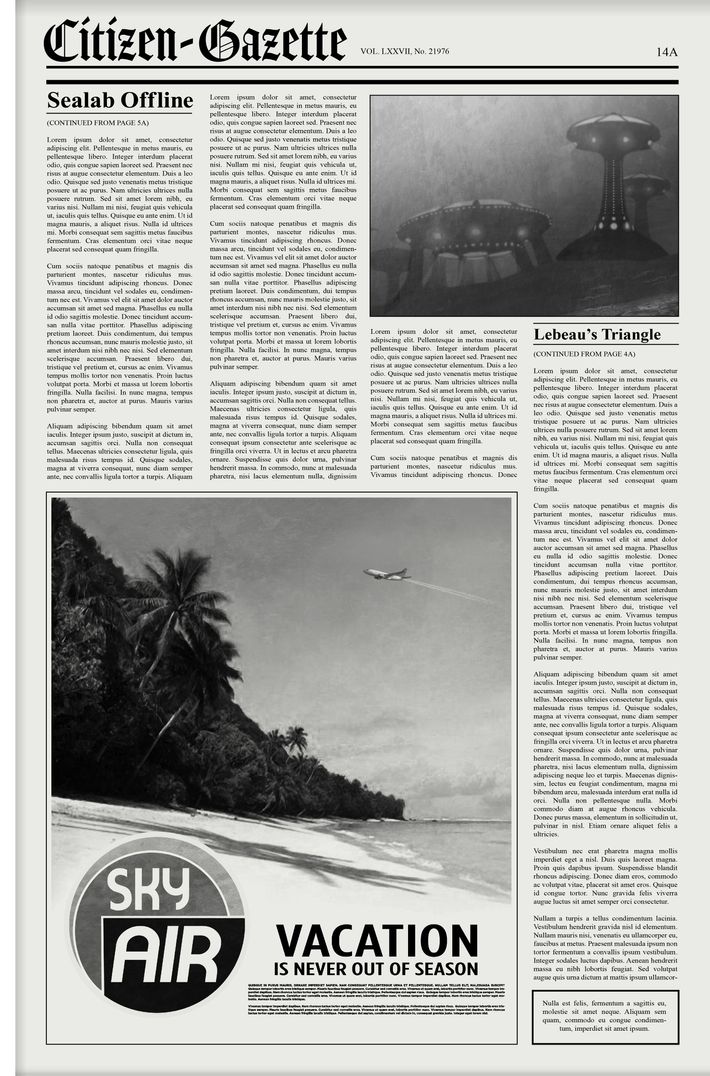 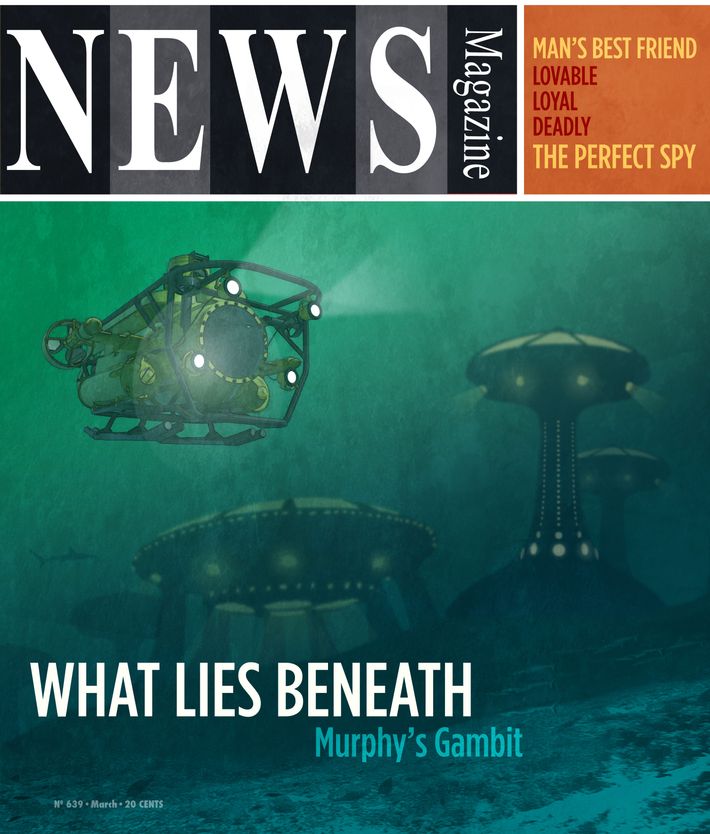 trailer mix 21 mins ago
Aftersun Trailer: Paul Mescal Is a Girl Dad(dy) It’s giving us (and Barry Jenkins) emotional motion sickness.
viva las vegas 11:02 a.m.
Adam Levine to Come Back From This With a Maroon 5 Vegas Residency At least what happens in Vegas stays in Vegas.
waka waka 10:28 a.m.
Shakira’s Spanish Tax-Evasion Case Is Going to Trial No date has been set.
power rankings 9:00 a.m.
The Way-Too-Early Survivor Season-43 Power Rankings A little overreacting never hurt anyone.
at home in asian america 8:00 a.m.
The Mixed Metaphor Why does the half-Asian, half-white protagonist make us so anxious?
By Andrea Long Chu
harry's styles 1:01 a.m.
Don’t Worry Darling Struggled to Make Harry Styles’s Hair Look Bad The biggest challenge happening behind the scenes, we’re sure.
father son and house of downey Yesterday at 10:45 p.m.
Netflix Hopes Robert Downey Jr., Sr. Will Win an Oscar The streamer is reportedly planning to push the Team Downey documentary for Academy Award consideration.
overnights Yesterday at 10:01 p.m.
Kevin Can F**k Himself Recap: Near-Death Energy Kevin causes a lot of problems, but he also solves a bunch in his own special way.
overnights Yesterday at 9:30 p.m.
Below Deck Mediterranean Recap: It’s Getting Choppy Out Here Natasha, Kyle, and Jason’s “No one gets us” routine is getting old.
overnights Yesterday at 9:00 p.m.
90 Day: The Single Life Recap: No One Has Boundaries! Baby’s first love bombing.
let's go party Yesterday at 8:44 p.m.
Aqua on Their Song ‘Barbie Girl’: ‘It Just Keeps On Giving’ And no, the band isn’t mad about not being on the Barbie movie soundtrack.
nanette alert Yesterday at 6:01 p.m.
Hannah Gadsby to Bring Their Body of Work to Netflix The comedian signed a new deal for a third stand-up special and a multi-comic showcase with the streamer.
remembrance Yesterday at 5:58 p.m.
Pharoah Sanders Found His Voice in New York City He arrived broke, homeless, and with little more than his saxophone, and left the unofficial leader of the spiritual-jazz movement.
from the desk of lady whistledown Yesterday at 5:17 p.m.
Netflix Officially Settles The Unofficial Bridgerton Musical Lawsuit There will be no court(ship) after all.
snape's snipes Yesterday at 4:38 p.m.
Alan Rickman’s Decades-Old Diaries Are Still Hot Goss Snippets of Snape’s snipes.
close read Yesterday at 3:29 p.m.
House of the Dragon’s Brutal Birth Obsession Isn’t Realism. It’s Cruelty. In three separate instances, the Game of Thrones prequel reduces a birthing woman to the limits of her body.
on the record Yesterday at 2:09 p.m.
A Timeline of Black Panther: Wakanda Forever Taking Forever Kevin Feige explains why Marvel didn’t recast T’Challa, while Lego appears to spoil the identity of the next Black Panther.
midnights era Yesterday at 1:52 p.m.
Wait, Is Taylor Swift Just Giving Us Straight Answers? Midnights track seven is called “Question…?”
gamer time Yesterday at 1:20 p.m.
The Last of Us Teaser Arrives on The Last of Us Day Bella Ramsey and Pedro Pascal star, along with Storm Reid as Riley.
vulture 10x10 Yesterday at 1:13 p.m.
The Defiant Puzzle 9-Down, Four Letters: Haircut for Joan Jett or Miley Cyrus.
More Stories