Hello again! Remember the Real Housewives of Beverly Hills finale? So do I! Remember the reunion that came right after it? Well, me, too. Let’s dig in.

First of all, I feel compelled to mention that everybody on Lisa’s couch wore a dress with some kind of sheer overlay on its arm and shoulder area. Interesting trend! (What does “interesting” mean again?) Also, within the course of the hour, Brandi only disappointed me in that she didn’t sport a red lip. Yolanda, meanwhile, was a valentine in red, and Kyle draped herself in Christmassy hunter-green velvet. Kim’s makeup was more “vulnerable skunk”-ish than usual, and Lisa looked flawless. Let us now move on to what these people actually said!

The first declaration of the night came from Andy Cohen, who expressed, on behalf of Bravo, his EXTREME DISAPPOINTMENT in Adrienne Maloof, who didn’t show up to the reunion and was therefore, according to Andy, FIRED. “Not showing up,” quoth Cohen, “was Adrienne Maloof’s final act as a Housewife.” And when Andy asked, “Is it cowardly not coming today?” and the network made sure Brandi’s “absolutely” response was intact right after his rhetorical query, the network party line was clear. Maloof, in her pussing out, forfeited the game. Now her story will never be on the official record. Nobody reads Radar Online, and even if they did, nobody would care enough about its articles to string together Adrienne’s segmented versions of events. Whether Adrienne chose not to return to the show or Bravo chose to can her, before or after the reunion, Maloof’s no-show was a big middle finger to the RHOBH audience. That said — we’d already made up our mind, Adrienne. Adieu to you.

After those dusty bones were swept away from the Housewife attic, we moved on to the subject of secrets and how people feel about them. Specifically, the ladies discussed, as best they could, Adrienne’s surrogacy secret that Brandi spilled during the shooting of season three, and any version of which Bravo is apparently unable to discuss on air without possibly being sued. That was annoying, and Andy acknowledged as much. As such? Words are silly, yes/no? 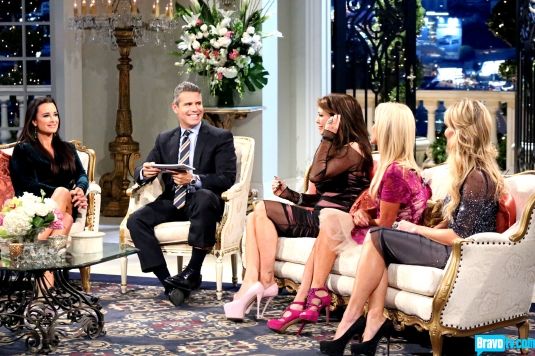 Then, moving on to the more general topic of things one mustn’t discuss, Kim weighed in on the nature of secrets and how important it is to keep them, and Brandi, in the absence of a dissenting Maloof, cleared up the “did or didn’t Adrienne sue her” matter, but she also sort of made it cloudier by introducing the character of “Her friend, Geneva?” Either way, we love Brandi. Hooray for Brandi! And this was also a nice opportunity for the Housewives to talk about that which they could not in the series — the matter of whether it was possible to go on a reality show and still expect your secrets to be safe. To say nothing of whether it was reasonable to serve a fellow cast member with a gag order concerning any potential trash talk she might spout from her pouty pale lips about a fellow Housewife throughout the course of the show. 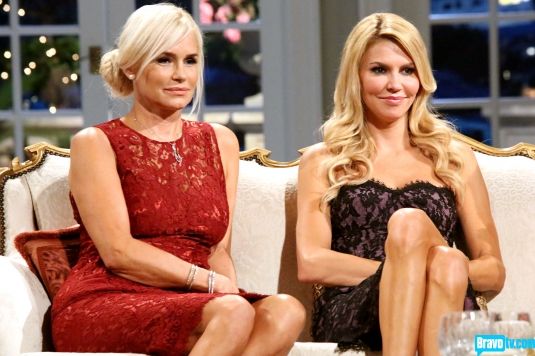 Then we moved on to a Yolanda montage. After a sizzle reel of her most lemony moments, Yolanda complained that none of the other women made an effort to get to know her besides Brandi, and Kyle was like, “I tried to get to know you,” and Yolanda was like, “Shut up, no you didn’t.” Yo also made the distinction between being a stuck-up isolated bitch and being a self-protective Dutch person. She made sense, and her hair looked nice.

Then there was some Yo-versus-Kim stuff in regards to Kim missing their master cleanse date, and it was sad to see Kim get defensive about something she was clearly wrong about. Kim, if you’re going to pick a cause, don’t wave the “I’m misrepresented as being irresponsible” flag. Kim, you are NOT misrepresented as being flaky and fucked-up, because you’re flaky and fucked-up as fuck-all. It’s okay. Radical acceptance, Kim. Stop worrying about whether or not people know you’re sober and focus on being sober. Stop getting angry that people call you out on missing dates and acting wacky and take responsibility for your own character defects. Jesus — is Kim even IN recovery? Is her failure to accept anything about her disease or her own role in her life’s shortcomings the REAL reason Enlightened was canceled? She is seriously the least recovery-ish person in recovery I’ve ever known to supposedly be in recovery. Also, I think Kim has some brain damage, and I am sad for her. I feel gross attacking her when we should all be pitying her. Right? Am I alone here? 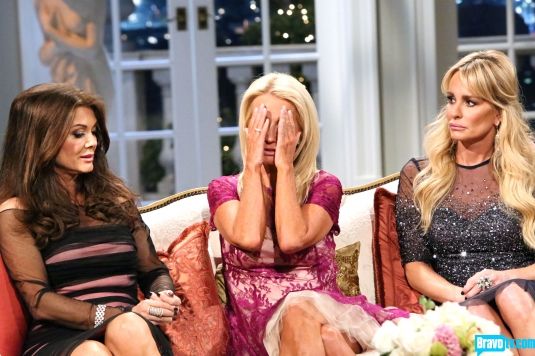 After Yolanda’s act, Andy treated us to a boring and sad montage of Taylor’s drinking-est moments during the season. Taylor admitted to habitually enjoying too much funny juice, and explained that the whole “not knowing where her kid was” incident had to do with a nanny mix-up. She added that the scene was also edited, which Kyle and Kim backed up. Earning her salary, Brandi asked Kim and Kyle whether they felt it was appropriate to broadcast Taylor’s wine-and-sex-with-a-married-dude-fueled/generally irresponsible phone behavior to all of Kim’s New Nose Party, and Kyle got defensive on the reunion because she thought the “Hey, we’re all on a reality show!” excuse would cover her ass for her shit-talk. It doesn’t! It didn’t. Kyle is garbage.

Speaking of Kyle, the next act of the reunion focused on the disintegrating friendship between Kyle and Lisa. After a clip package that illustrated Kyle’s two-faced, disingenuous neutrality, Lisa explained that Kyle’s shift in loyalty from Lisa to Adrienne had to do with Mauricio’s business relationship with the Malooves in regards to the sale of their house. Kyle didn’t own up to that accusation, and Lisa said that she and Ken hadn’t heard boo from Kyle ever since Mauricio moved on from the sale of the Vanderpump home. Kyle said she felt replaced by Brandi and hypothesized, in regards to her constant gossiping, “Maybe I’m a horrible person, but I go to my friends to talk,” which means “I am a horrible person who talks trash about my fake friends to my real friends.” 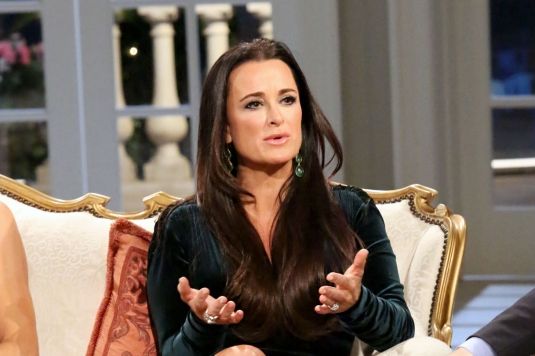 After Kyle claimed that she wasn’t a shit-talking monster, Brandi even admitted that she hadn’t gotten into any scuffles with her this season. That’s when Yolanda stepped in and said, “Yeah, but Kyle — you talked shit about Brandi the second we got in the limo in Vegas. “Oh, REALLY?” Kyle responded — “Well, Yolanda, why don’t you tell Lisa what you said about her in Paris?”

Here’s where I need your help, guys. What did Yolanda say about Lisa in Paris? Was this the scene where Mauricio, Kyle, and Kim were shopping, and Kim was hurt that Lisa commented on how late she was the night before, and the gang agreed that Lisa didn’t really care about Kim, and if she did, she would have called her to make sure she was okay the day after she made everybody wait an hour before their cooking class and then acted insane? Was Yolanda in that scene or was she jogging? Ugh. I don’t know. I’m tired. I like Yolanda; I don’t like Kyle. Also, apparently Yolanda talks trash about the other ladies on her blog? Good for her. And what was all this about the airport? Please remind me, guys. D.J. Soft Batch is so sleepy and full of matzo and parsley.

I will say this: If Yolanda can manage her Lyme disease, I hope she comes back next season. Are you guys in favor of scrapping the sisters Richards? Or are those just unsubstantiated rumors with no fan support behind them? Taylor is a goner, right? Please weigh in!

Until next week, my friends. That is when we will discuss part two of the reunion and decide together who won the series and who lost! We will also exchange home addresses and promise to keep in touch, like at the end of camp. I’ll sign your T-shirt and everything.