Ever since Melissa Leo’s Hair won an Oscar for the amazing work it did in The Fighter, the world has waited with baited breath: Would director David O. Russell ever again be able to coax such riveting, layered work from the scalps of other Hollywood actors? To judge from his currently filming, untitled comic drama, the answer is yes … and it was a blowout decision. We knew something special was percolating when we saw Batman’s combover and Bradley Cooper in roller curls colored My Little Pony pink, but then Oscar-winning American sweetheart Jennifer Lawrence appeared on the set of the seventies-set movie with … well, look at it. Look at it. It’s unreal, and it’s spectacular. How did she manage to get such volume? By stuffing her beehive updo with secrets, obviously. Forthwith, the items almost certainly contained in all that hair. 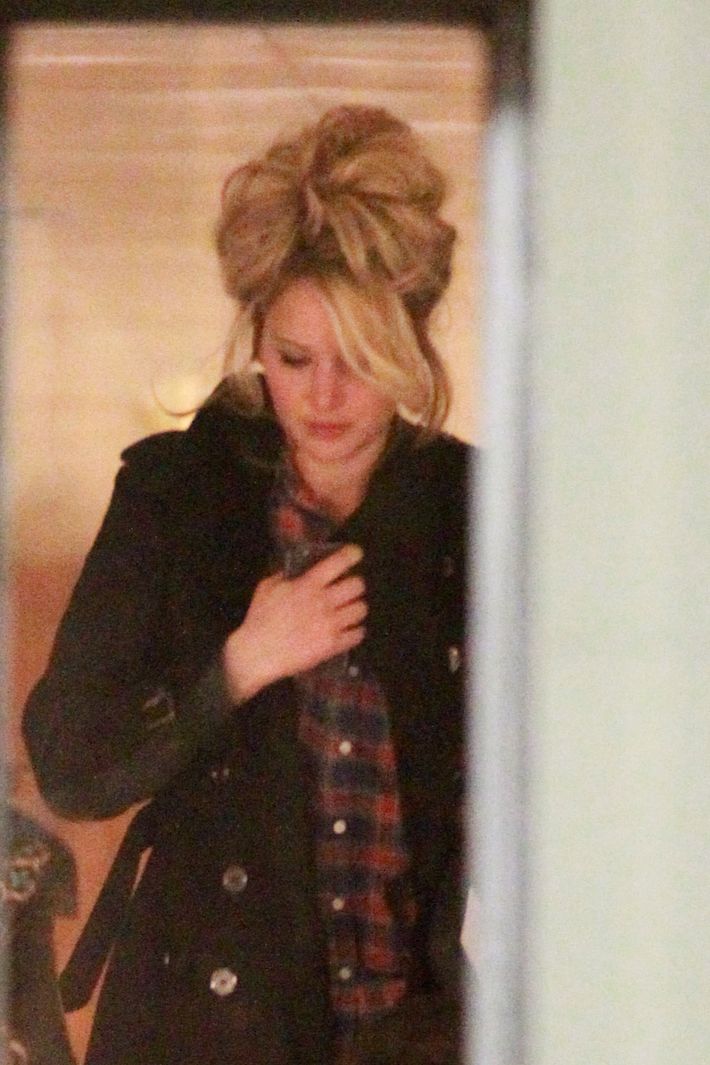 Secret Contents: A European family of four that lives modestly within its means; an enchanted dagger that must be plunged into Emma Stone’s torso at midnight in order to work; Jack Nicholson’s sunglasses.

take your kids to work day 13 mins ago
Thor: Love and Thunder Is Apparently a Family Movie In that the children of Chris Hemsworth, Natalie Portman, Christian Bale, and Taika Waititi all appear in it.
overnights 10:00 p.m.
Irma Vep Recap: Three Hours Later Where is the line drawn?
life after roe 8:04 p.m.
Celebrities Respond to the Supreme Court’s Overturning of Roe v. Wade Including Katy Perry, Jessica Chastain, and Ariana DeBose.
in sickness and in health 7:56 p.m.
Travis Barker Is Feeling ‘Much Better’ He said he was hospitalized with “life-threatening pancreatitis” after an endoscopy went wrong.
infinite avatar 6:55 p.m.
All of the Avatar Sequel Announcements: A Timeline The first Avatar sequel has a name, it has a release date, and it has a way with water.
exiting his pandora era? 4:57 p.m.
James Cameron May ‘Pass The Baton’ to Another Director for Avatar 4 & 5 “I’ll want to pass the baton to a director that I trust to take over.”
mike on the run 4:19 p.m.
Killer Mike Returns with Dave Chappelle in ‘Run’ Music Video His first solo song in 10 years.
scams 4:00 p.m.
Chloe Fineman Almost Got Got by Anna Delvey The SNL star finally received the sketch she ordered, after telling The View she never got it.
overnights 2:37 p.m.
90 Day Fiancé Recap: Why is Leandro Here? Who makes their current husband and ex-husband buy them a pregnancy test?
dog eat dog world 2:11 p.m.
Joey Chestnut Defends Hot Dog Eating Title, Literally He fought off a protester mid-dog.
vulture 10x10 12:00 p.m.
The Minions Puzzle 12-Down, Three Letters: Please Don’t Destroy show.
vulture guides 9:00 a.m.
Which Streaming Service Do You Actually Want? Helping you navigate the many, many, many, many, many, many, many options out there.
chat room 9:00 a.m.
Sadie Sink on Her Stranger Things Season From Hell “There’s still a small glimmer of hope.”
vulture picks 8:00 a.m.
25 Notable New Releases Over the Next Two Weeks Lizzo’s new album, Better Call Saul’s final season, Shakespeare in the park, and more.
overnights Yesterday at 11:06 p.m.
P-Valley Recap: A Cinderella Story Keyshawn’s fairy tale includes a nefarious stepmother, competitive step sisters, and a star-crossed love interest.
overnights Yesterday at 11:01 p.m.
Becoming Elizabeth Recap: That Girl is Dead Catherine and Elizabeth could have thrown Thomas in a ditch and lived together when they had the chance.
video games Yesterday at 10:00 p.m.
Oh Hey, I’m Having Fun Watching Westworld Season four is already a goofier, more compelling reboot of the series.
overnights Yesterday at 9:55 p.m.
Westworld Recap: We Have to Go Back The robot uprising is alive and well — it’s simply gone underground.
it's morbin' time Yesterday at 7:37 p.m.
Why Is Everyone Seeing the Minions Movie? The Morbius Effect, but it actually worked.
collabs Yesterday at 6:57 p.m.
Watch Drake Briefly Become the 6th Backstreet Boy You can’t do Toronto without Champagne Papi getting involved.
More Stories