To help hype the third season of Game of Thrones, HBO sent celebrity fans like Mindy Kaling, Patton Oswalt, and Anna Kendrick personalized House swag straight out of King’s Landing. One guy they shouldn’t have forgotten: The Mindy Project’s Ike Barinholtz, who told Vulture that he dressed up for Adam Levine’s Halloween party as Catelyn Stark’s lady knight Brienne. He also sent us the accompanying photo as proof. He managed to convince his wife, Erica, to go as Brienne’s prisoner, the kingslayer Jamie Lannister. “She’s not as into it as I am,” Barinholtz explained. “She was like, ‘Are you sure? Will people get it?’ and I said, ‘Absolutely, they will.’” Unfortunately, no one did. “We walk up to Stephen Merchant. He goes, ‘Great costume … Uh, who are you?’ ‘Game of Thrones.’ ‘Which ones?’ He had no idea.” 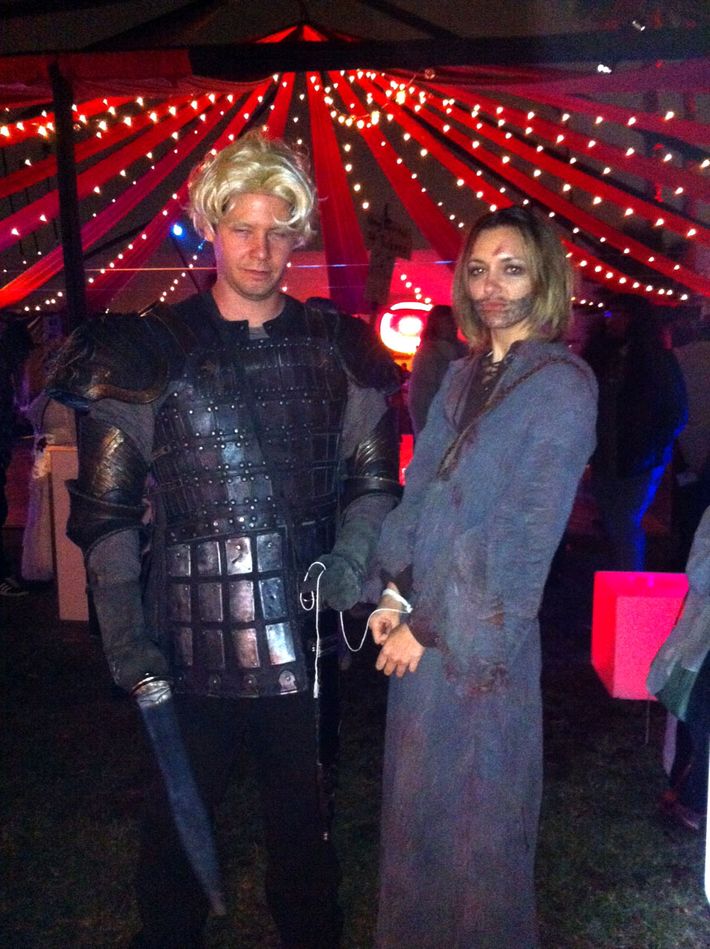 bad boys 25 mins ago
Zoe Kravitz Wanted ‘Boy Next Door’ Channing Tatum to Play a Dark Character “It’s always really intriguing to have someone bring you something that literally no one else has ever thought of you for.”
overnights Yesterday at 10:31 p.m.
What We Do in the Shadows Recap: Shout at the (Jersey) Devil This is about as heartwarming as What We Do in the Shadows gets. (Insert Nadja making a barf gesture here.)
tweet tweet Yesterday at 9:08 p.m.
Rachel Zegler Lies in Snow in Hunger Games Prequel First Look Well, technically Coriolanus Snow for The Ballad of Songbirds and Snakes.
family reunion Yesterday at 7:04 p.m.
The Addams Family Sticks to Their Roots in Netflix’s Wednesday The first look images of Tim Burton’s Addams Family spinoff is here.
alternate endings Yesterday at 6:35 p.m.
Better Call Saul Could Have Ended Very Differently Jesse in prison, Gene in color, and the other possibilities considered, sincerely and in jest, for the end of this decade-and-a-half-spanning saga.
mac-ken-zie da-vis Yesterday at 6:24 p.m.
MacKenzie Davis Shows a Massive Respect to Stath Lets Flats Watch her go. Watch her go.
clear eyes full hearts Yesterday at 5:59 p.m.
W Magazine’s Uncanny Valley TV Cosplay, Ranked From last-minute Halloween costume to, well, store-bought Halloween costume.
batter up! Yesterday at 5:27 p.m.
All of A League of Their Own’s Nods to the 1992 Peaches Of course the Prime Video series knows “there’s no crying in baseball,” but that’s just the beginning of its many winks to the movie.
rip Yesterday at 5:20 p.m.
Wolfgang Petersen, Das Boot and The NeverEnding Story Director, Dead at 81 The German director defined action thrillers for a generation with films such as In the Line of Fire.
nicki voice: it's the remix Yesterday at 4:42 p.m.
Rogue One to Be Rereleased With a Sneak Peek at Prequel Series Andor Ahead of the Disney+ series’ September 21 premiere.
a long talk Yesterday at 4:27 p.m.
Kim Wexler’s Curtain Call Better Call Saul’s Rhea Seehorn looks back on six seasons spent getting inside ‘an extremely inscrutable character.’
By Jen Chaney
the o group Yesterday at 3:35 p.m.
Wait, How Many Homes Has Selling Sunset Star Chrishell Stause Sold? “As of June, I think I’ve done seven deals so far in real estate …”
vulture lists Yesterday at 3:00 p.m.
A Ranked Guide to John Wick–Inspired Movies Evaluating the latest generation of stunt-heavy, fist-fighting action movies.
movie nights Yesterday at 3:00 p.m.
Noah Baumbach’s White Noise Will Open This Year’s New York Film Festival Luca Guadagnino’s Bones and All and Maria Schrader’s She Said join the festival’s Spotlight selection.
trailer mix Yesterday at 2:31 p.m.
Cobra Kai Season 5 Trailer: The Valley Is Still at War Netflix’s Karate Kid spinoff premieres with honor on September 9.
remembrance Yesterday at 2:00 p.m.
The Jagged Life of Anne Heche She lived and died like an early Hollywood star who imploded before a grande dame period could get under way.
By Matt Zoller Seitz
lumon+ Yesterday at 1:35 p.m.
You Can Guess What a Book Called Talkin’ and Walken Would Be About Okay, but can you guess who would write it?
switched on pop Yesterday at 1:30 p.m.
Demi Lovato Knows All the Highs and ‘Whoas’ of Pop Punk On “Substance,” she flexes her intimate familiarity with the genre.
dancing through life Yesterday at 1:29 p.m.
Solange Is on Her Way to the Ballet “Very excited to announce i’ve composed an original score for the New York City Ballet 🖤”
overnights Yesterday at 1:26 p.m.
Only Murders in the Building Recap: All Is Not OK in NYC Is identifying a killer harder than sorting out daddy issues? Hard to say.
More Stories