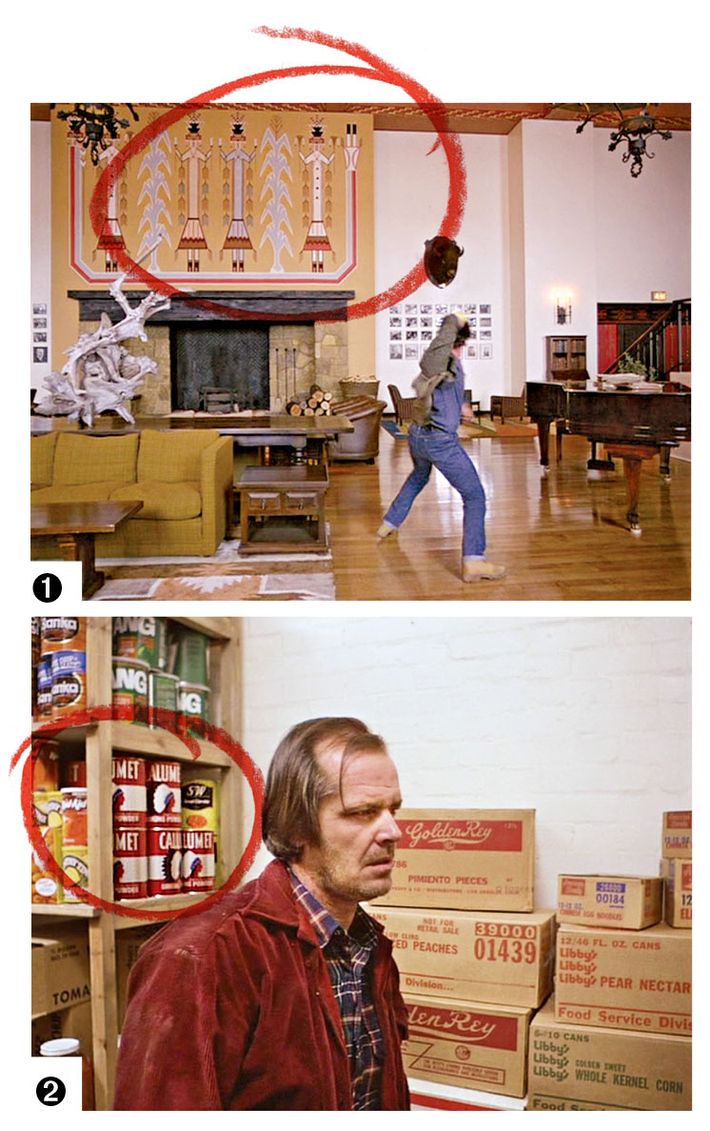 Theorist: Bill Blakemore, television correspondent, author.
Theory: The film is about the horrible crimes perpetrated on Native Americans by whites.
Evidence: In the movie (but not the Stephen King novel on which it was based), the Overlook Hotel is said to be built on a Native American graveyard. There are Native American artifacts and designs throughout the hotel (1); the hotel’s pantry, which figures in important scenes, is well stocked with Calumet baking powder (2), whose labels prominently feature an American Indian. (Calumet means “peace pipe,” and the cans symbolize the broken peace pipe, both between white men and natives and between Jack and his family.) Blakemore posits that The Shining suggests we can only escape this “nightmare of history” by retracing our steps—just as Danny Torrance does in the hedge maze.

2. It’s Really About the Nazi Holocaust

Theorist: Geoffrey Cocks, professor of history, Albion College, Michigan.
Theory: The film is an allegory about coming to terms with Hitler’s extermination camps.
Evidence: Jack Torrance’s Adler typewriter (1) is manufactured in Germany: “a bureaucratic killing machine,” Cocks said in one interview. The number 42 is on Danny’s sweatshirt (2); Wendy Torrance swings the bat 42 times at her husband; 1942 was the year of the Final Solution, and 42 has been used as shorthand to refer to the Holocaust. The film has abundant eagle imagery, symbolizing state power. After Danny has his first vision of the elevators gushing blood, a sticker of Dopey the Dwarf (3) on his bedroom door disappears: “Before,” Cocks says, “Danny had no idea about the world. And now, he knows. He’s no longer a dope about things.” Kubrick was indeed researching a proposed Holocaust film around this time.

3. It’s Really About the Minotaur in His Maze 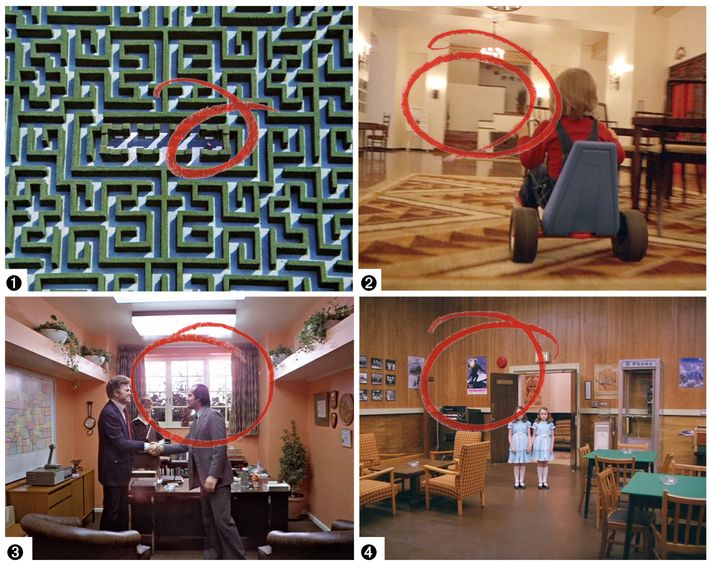 Theorist: Juli Kearns, playwright, novelist.
Theory: The film is based on the Greek myth of the Cretan half-bull, half-man at the center of a labyrinth, slain by Theseus.
Evidence: The hedge maze (1); the labyrinthine architecture of the hotel (2); the “impossible window” (3) in the office of Jack Torrance’s boss; several images of the Minotaur, notably the Monarch skiing poster (4) on the wall in the game room. 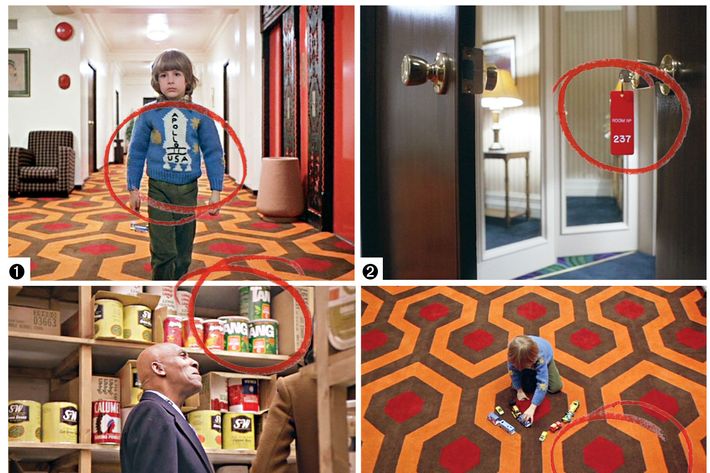 Theorist: Jay Weidner, author, filmmaker, independent scholar.
Theory: Weidner and others believe that the moon landing witnessed on television was faked, created on a soundstage by Stanley Kubrick in collusion with the U.S. government; Weidner believes that the film is Kubrick’s attempt to come to terms with his supposed involvement.
Evidence: Danny wears an Apollo 11 sweater (1); Room 237 (2) represents the moon-landing stage where Kubrick supposedly worked—the moon is about 237,000 miles from Earth; the prevalence of Tang cans (3) (created for astronauts) in the hotel’s pantry; the pattern on the carpet (4) where Danny plays matches that of Launch Pad 39A, from which the Apollo rocket took off.

*This article originally appeared in the March 25, 2013 issue of New York Magazine.

Inside the Crowded Cult of The Shining Theorists

doing something unholy 11 mins ago
Kim Petras Has ‘Nothing to Say or Be Ashamed of’ About Dr. Luke Collabs She was previously one of his loudest defenders.
knives? out. 1:48 p.m.
Glass Onion: A Knives Out Mystery Delivers Its Final Clue Must see: Janelle Monáe and Daniel Craig discussing the game Clue.
flop weekend 12:42 p.m.
Disney’s Strange World Eats Space Dirt at the Box Office Not even Jake Gyllenhaal’s press-junket memes could save it.
pick-a-little donate-a-lot 12:20 p.m.
Nicole Kidman Comes to This Place (The Music Man) for Magic (to Donate $100K) Only she could earn a standing ovation as an audience member.
vulture 10x10 12:00 p.m.
The Geometric Puzzle 21-Down, Five Letters: Movie that gave us the term “chestburster.”
the law 12:00 p.m.
Everything We Know About the Megan Thee Stallion and Tory Lanez Shooting Lanez has been ordered under house arrest following an alleged altercation with August Alsina.
By Victoria Bekiempis and Zoe Haylock
piano's hot 11:29 a.m.
Damien Chazelle Is Spiritually Incapable of Making a Movie Sans Jazz Margot Robbie All About Eves Samara Weaving in the Babylon trailer.
overnights 11:18 a.m.
The Real Housewives of Potomac Recap: Take It to da House Somehow, Karen has become the personal steward of everyone’s behavior in this Mia-versus-Wendy situation.
disrespect the classics 10:59 a.m.
Bob Dylan Hopes to ‘Rectify’ Book-Signature Controversy ‘Immediately’ After Simon & Schuster offered refunds for $599 auto-signed editions of his new book.
snow jams 9:29 a.m.
The 50 Best Original Christmas Songs Since ‘All I Want for Christmas Is You’ Queen of Christmas, meet your disciples.
last night on late night Yesterday at 11:25 p.m.
John Mellencamp Has No Interest in Doing a Super Bowl Halftime Show He said so on WWHL.
chat room Yesterday at 10:05 p.m.
Leo Woodall Needed Some Time to Digest That White Lotus Reveal “I’d been told I might have a rumble and tumble with a couple of characters, but I didn’t know who.”
whodunnit? Yesterday at 10:03 p.m.
The White Lotus Kill or Be Killed Report: Two Can Keep a Secret Well, a couple of names just shot to the top of the suspect/victim list.
overnights Yesterday at 10:03 p.m.
The White Lotus Recap: Whoopsie As family secrets are being kept and revealed back at the resort, a new one is brewing in Palermo.
overnights Yesterday at 9:15 p.m.
Yellowstone Recap: As Good As Gone The dynamic between Jamie and Beth changes for the first time … ever?
overnights Yesterday at 9:00 p.m.
Dangerous Liaisons Recap: The Sex Dungeon The growing bromance between Camille and Valmont is delightful.
theater review Yesterday at 8:49 p.m.
KPOP Offers a Not-Actually-All-Access Pass A musical about making it big feels neutered by its own backstage process.
justice for booster gold Yesterday at 6:25 p.m.
James Gunn Wants All the DC Movies, TV, and Games ‘Connected’ He and Peter Safran have big plans for the DCU.
coming soon Yesterday at 5:50 p.m.
Helen Mirren Will Travel to 1923 for Yellowstone Prequel A new trailer dropped showing off Mirren and Harrison Ford smoldering at each other.
fancasts Yesterday at 5:40 p.m.
Hey, Antonio Banderas Knows a ‘Fun’ Guy Who Could Play Zorro If he was asked to do a third movie, he would want to pass the mask to this former co-star.
More Stories