With Beasts of the Southern Wild’s cutie Quvenzhané Wallis cast and (as of yesterday) Jamie Foxx in talks to co-star in the upcoming Will Smith and Jay Z-produced Annie remake, it seems like us hard-knock lifers will finally get the modern-day remake we’ve been waiting for. But who will/should play the rest of the musical misfits? Let’s take a few (educated?) guesses. 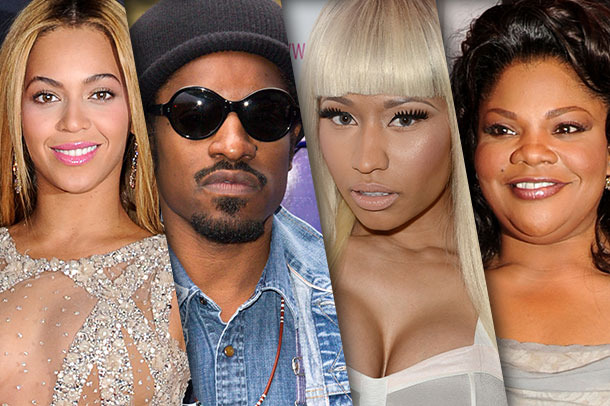 Aside from Jane Lynch, who just took a spot in the Broadway revival of Annie, the only woman brave enough to fill the iconic shoes of Carol Burnett’s Miss Hannigan is Monique. The brassy, boozy life of a philandering orphanage proprietress is perfect for the comedian who created (and starred in) Phat Girlz.

If only for the look, Andre 3000 would have no problem slipping in to the old-timey shoes of Miss Hannigan’s equally awful brother, Rooster. He starred in 2006’s Idlewild, which was also set in the Prohibition-era South and featured Andre playing a character named Rooster. If this isn’t fate, then we’ll hand over all of our bathtub gin.

As for Rooster’s sidekick, the sultry Ms. Lily St. Regis, Nicki Minaj’s wig collection ALONE would complement the character’s short arc in many ways. For one, she’s a known criminal, so the varying looks would provide the ultimate camouflage. But also, Lily is one for the flair. Furs, hats, and pearls would all be included.

With Jay-Z producing, this shouldn’t be a problem. Beyoncé would make a lovely Grace Farrell: They both are wonderfully put-together, and if Beyoncé knows Annie like we do (AND SHE DOES), she’d know that Grace’s singing parts in “N.Y.C.” and “Let’s Go to the Movies” are often overlooked. And no one dances like Grace … or Beyoncé. 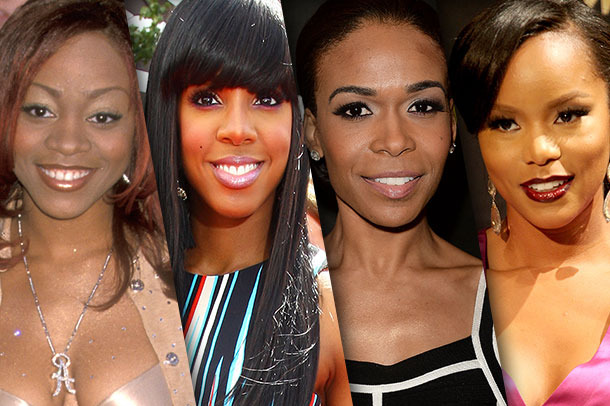 Hey! We all know they can harmonize.

The host of America’s favorite radio program, “The Oxydent Hour of Smiles,” the one-and-only Bert Healy also conducts the nationwide search for Annie’s true parents on behalf of Daddy Warbucks. Update that with some Colgate, maybe change the station to HOT 97, and the perfect host would be Cee-Lo Green. His flamboyant style (see: The Voice), made-for-radio vocals (see: Gnarls Barkley), and electric ‘tude (see: “Gettin’ Freaky with Cee-Lo”) would make him the perfect fit. A few favors have been called in here, but if Willow Smith is OUT, we’re gonna need some extra nepotistic flavor. Just imagine Kitty’s freestyle verse in “Hard Knock Life”! And Apple Martin running a mop up and down the orphanage hallways. Add Blue Ivy (she’ll be walking next year, we imagine?), and Sasha Obama as Tessie, and these orphans will actually be adopted in no time. Aside from Drake being played by Drake (sorry, we had to), the rest of these ladies would jump at the chance to dance around Jamie Foxx’s mansion. Something to note: We at least know they’re all free? [Sly smile.]

If this ain’t a big “duh” … not only because they’re the actual President and First Lady, but because they are BFFs with Jay. An easy ask, I’d say.

Sandy: The Voice of Snoop Dogg

Snoop Dogg, Snoop Lion, whatever — there’s no other person who could properly “voice” this updated Sandy. CGI is really, really good these days, and who says Sandy couldn’t get some solid one-liners? (At least he’s not named ROVER, okay?)

a long talk 9:00 a.m.
Rebecca Sugar Says Good-bye to Steven Universe The trailblazing showrunner on the Future finale, therapy, and the dark side of selflessness.
By Eric Thurm
vulture investigates 9:00 a.m.
Now That No One Cares Anymore, Who Was Right in the Kanye-Taylor Feud? The fact that this feud no longer arouses any emotion whatsoever makes now the perfect time to relitigate it once and for all.
By Nate Jones
coronavirus 8:00 a.m.
Awards Season Could Look Very Different This Year The Golden Globes and Primetime Emmys are suddenly changing eligibility rules out of concern for you know. So what does that mean for the Oscars?
overnights 6:00 a.m.
Ozark Recap: What Do You Want? Everyone in the Ozarks has to cover for Marty as he goes through life-changing trauma south of the border.
coronavirus Yesterday at 11:39 p.m.
Tom Hanks and Rita Wilson Make Their Glorious Return to the States The pair were spotted back in L.A. after being quarantined in Australia.
psa Yesterday at 10:44 p.m.
In Their Coronavirus PSA, HBO’s Watchmen Cast Asks: Who Washes the Washmen? Oh boy, if you thought those “My Corona” puns were bad…
overnights Yesterday at 10:00 p.m.
RuPaul’s Drag Race Recap: The Girls Are Fighting! This year’s acting challenge proves to be one of the better installments in the Drag Race adapted screenplay canon, but the real drama is in Untucked.
coronavirus Yesterday at 9:25 p.m.
How the Late-Night Shows Are Handling Coronavirus Quarantine For some of them, the show must go on … at home.
overnights Yesterday at 9:00 p.m.
Ozark Recap: Time For Me to Fly A great, tense, and improbably funny episode ends with one of the best scenes in the history of Ozark.
coronavirus Yesterday at 8:42 p.m.
Kristen Bell to Host Nickelodeon Town Hall Designed to Teach Kids About COVID-19 The hour-long special will answer children’s questions, provide tips and address their concerns about what the heck is going on.
follow friday Yesterday at 8:18 p.m.
Quinta Brunson Is Watching Tiger King, in Case You Were Wondering We chatted with the comedian on Instagram Live about how she’s handling social distancing.
my single is dropping Yesterday at 7:43 p.m.
Jeremy Renner Dropped A New EP, And He’s Hoping It’s ‘The Medicine’ You Need And then a hero comes along, with the strength to carry on.
coronavirus Yesterday at 6:46 p.m.
All the Live Events, Movie Releases, and Productions Affected by the Coronavirus From the Billie Eilish tour to the Cannes Film Festival to numerous Broadway shows.
jeopardy! Yesterday at 6:32 p.m.
Alex Trebek Sings Lizzo’s ‘Truth Hurts’ and Now We Want Him to Drop the Album Drop the full track, Trebek.
coronavirus Yesterday at 6:15 p.m.
Disney’s U.S. Parks Will Be Closed Indefinitely They are staying shut down “until further notice.”
right click Yesterday at 6:00 p.m.
Bad Bunny Does Drag for ‘Yo Perreo Sola’ Video, Does Not Skimp on Fake Boobs Lot of leather.
movies Yesterday at 5:51 p.m.
A Full 2020 Digital Movie-Rental Calendar A guide to when you can rent Little Women, Rise of Skywalker, Sonic the Hedgehog, and other new releases.
conscious coupling Yesterday at 5:21 p.m.
Quarantine Is the New Cuffing Season for Celebrities Love is in the musty, stale, indoor air.
you can do this Yesterday at 5:13 p.m.
How to Get Through Shelter-in-Place With Kids, According to Two Dozen Parents The livestreams, indoor jungle gyms, kitchen soccer tournaments, and stopwatch games that will keep them (and you) occupied and happy.
psa Yesterday at 5:09 p.m.
Contagion Star Kate Winslet Will Now Teach You How to Wash Your Hands Correctly If you won’t listen to the CDC, listen to the Contagion cast.
More Stories