Game of Thrones, Arrested Development, Mad Men, Seinfeld — we love a show with a powerful ensemble. Bring on the chubby sidekicks, the sulky blondes, and the weird guys with odd hobbies! In honor of Game of Thrones’ third season (which premiered last night — read our recap here), we reimagined the people of the Seven Kingdoms (and beyond) as the casts of some of our other favorite television series. Winter is coming to all kinds of places.

Game of Thrones as Arrested Development 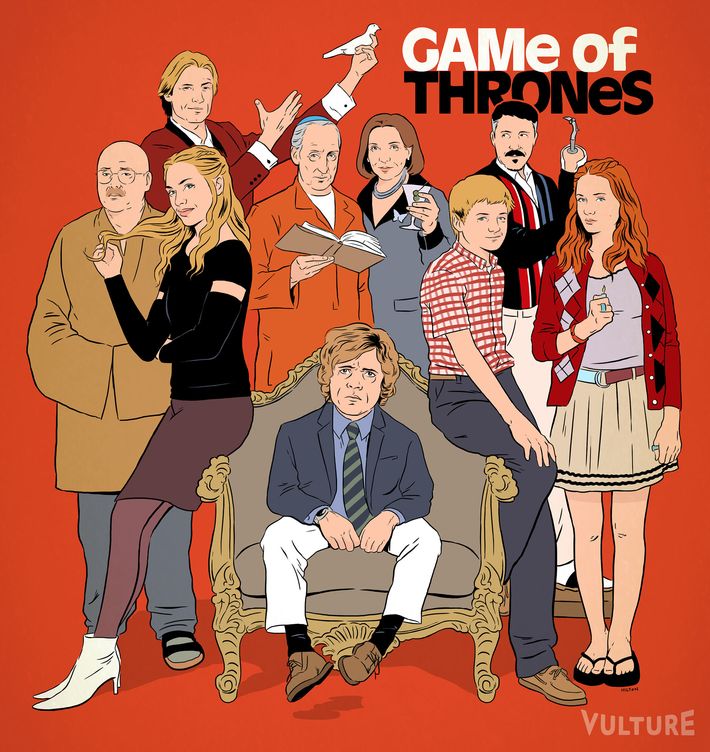 That’s Varys as Tobias, Jamie as Gob, Cersei as Lindsay, Tywin as George Sr., Tyrion as Michael, Catelyn as Lucille, Joffrey as George Michael, Littlefinger as Buster, and Sansa as Maeby.

Game of Thrones as Mad Men 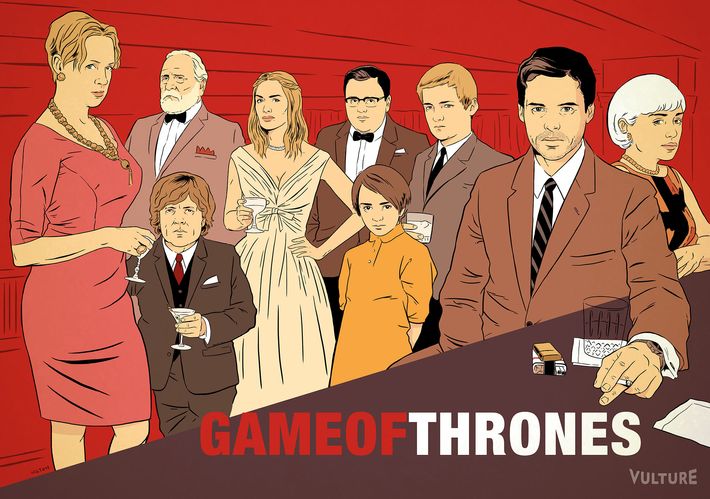 That’s Brienne as Joan, Jeor Mormont as Bert, Tyrion as Roger, Cersei as Betty, Samwell as Harry, Arya as Sally, Joffrey as Pete, Robb as Don, and Daenerys as Peggy.

Game of Thrones as Seinfeld 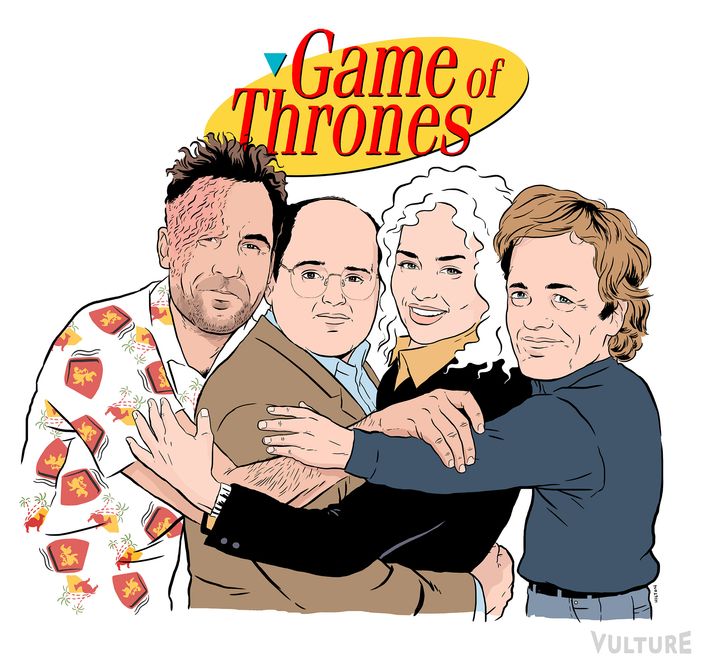 That’s the Hound as Kramer, Samwell as George, Daenerys as Elaine, and Tyrion as Jerry.

good one podcast 13 seconds ago
All Hail Matt Rogers, the Prince of Christmas The comedian talks his new special, longtime partnership with Bowen Yang, and the power of drag.
By Jesse David Fox
close read 8:00 a.m.
Luthen Rael Embodies Andor’s Gray Side In his similarities to Star Wars’ biggest villain, Stellan Skarsgård’s character challenges what we expect and accept from the franchise’s good guys.
comedy review 8:00 a.m.
Matt Rogers Makes the Yuletide Gay The comedian’s special, Have You Heard of Christmas?, is the gift that keeps on giving.
By Kathryn VanArendonk
overnights 4:00 a.m.
Fleishman Is in Trouble Recap: The Odyssey of Toby Toby’s attempts to impose his will on others are not going well.
respect the classics 1:25 a.m.
Dolly Parton Wants to Rock With Everyone on a New Album Parton told The Tonight Show that the album Rock Star would come out next fall.
tributes 12:33 a.m.
The Music Industry Mourns Fleetwood Mac’s Christine McVie Even Bill Clinton said goodbye to the Songbird.
performance art? Yesterday at 10:43 p.m.
The 1975’s Matty Healy Is Doing a Lot on Tour From kissing fans to eating raw meat onstage, here’s a roundup of what he’s been up to.
the law Yesterday at 9:13 p.m.
Judge Declared Mistrial in Danny Masterson Rape Case Jurors said they couldn’t reach a unanimous verdict.
overnights Yesterday at 9:00 p.m.
The Real Housewives of Salt Lake City Recap: Champagne Problems There’s no better way to remind someone of your Real Housewife status than pouring a glass of champagne on them.
development r'lyeh Yesterday at 7:25 p.m.
Guillermo del Toro Is Trying to Get At the Mountains of Madness Made Again This time as stop-motion.
coming soon Yesterday at 6:57 p.m.
Everything We Know About Amazon’s Fallout TV Show War never changes, but casting does.
coming soon Yesterday at 6:26 p.m.
Ang Lee’s Son to Star in Dad’s Bruce Lee ‘Passion Project’ The director’s biopic for the martial-arts icon will be a family affair.
new music Yesterday at 6:20 p.m.
SZA Puts Fans on Alert, Announces New Album S.O.S Set to come out in December. The album art dropped November 30.
songbird Yesterday at 5:59 p.m.
Stevie Nicks Memorializes Christine McVie, Her ‘Best Friend in the Whole World’ “I always knew I would need these words one day.”
vulture lists Yesterday at 4:00 p.m.
21 Great TV Christmas Episodes You Can Stream Right Now Mad Men, The O.C., 30 Rock, and more.
rip Yesterday at 3:30 p.m.
Christine McVie, Pillar of Fleetwood Mac, Dead at 79 The singer and songwriter joined the legendary rock band in 1970.
love fr Yesterday at 3:28 p.m.
Love Actually Is So White It’s ‘Stupid’ But 20 years isn’t too late for Richard Curtis to right those wrongs.
trailer mix Yesterday at 2:40 p.m.
You Know You Want to Check Out Cocaine Bear It’s a bear on cocaine.
book review Yesterday at 2:00 p.m.
Kathy Acker Wanted Everything Eat Your Mind, a new biography of the writer and punk feminist icon, is both maddening and compulsively readable.
By Sarah Chihaya
the bear claw Yesterday at 2:00 p.m.
A24 Got Its Beefiest Boys for The Iron Claw Zac Efron and Jeremy Allen White want to eat — I mean, beat — each other up.
More Stories