As seen in Sunday’s season-three premiere of Game of Thrones, Daenerys’s dragons aren’t so little or cute anymore — they’re more like a cross between a Komodo dragon and a Gremlin. And they’re growing fast. They’ll be prone to mood swings like most teenagers soon enough, according to Pixomondo’s VFX supervisor Sven Martin, who designed Dany’s fire-breathing babies for the show. Short of giving the three dragons acne, adolescence means big changes to the look of last season’s parrot-size creatures, and aging them up was largely a matter of capturing that mercurial teen angst. “The main idea for them this season was capturing the difference between how they look when they’re demure and when they’re threatening.” As babies, the dragons were able to dispose of the warlocks by setting them ablaze, but Martin said that was nothing compared to the terror they can now inspire. “We haven’t seen them really angry yet.”

The personalities of each of the three dragons will emerge more fully later in the season, but for now, Martin said to consider the black dragon, Drogon, the leader. “The other two are his wingmen.” Here’s a preview: A few episodes from now, Drogon will get a bit aggravated, and for that, Martin added features inspired by the well-documented reactions of “angry swans” and a famous movie beast. “One of the things that we played with that’s also new is frill and what it would look like when they’re mad. There are real lizards that have it. Or you may have seen it before in the first Jurassic Park, where the dinosaur is screaming at the guy in the car.”

Dany’s dragons were in happy and content mode in Sunday’s return, seen for the first time flying alongside her ship on its way to Astapor (and barbecuing their own mid-flight fish meal). They even look to Dany for some coddling, a behavior modeled after dogs. In fact, Martin said much of what makes up the dragons is inspired by real animals. Making them believable fliers, for example, was paramount to producers, and after more than a dozen different designs, the dragons were given a bat’s wingspan and the posture of an eagle mid-flight. “We wanted to keep it looking realistic, and of a realistic environment, which I think is the idea in Game of Thrones. It doesn’t look like a fantasy series, but of course it is one.” 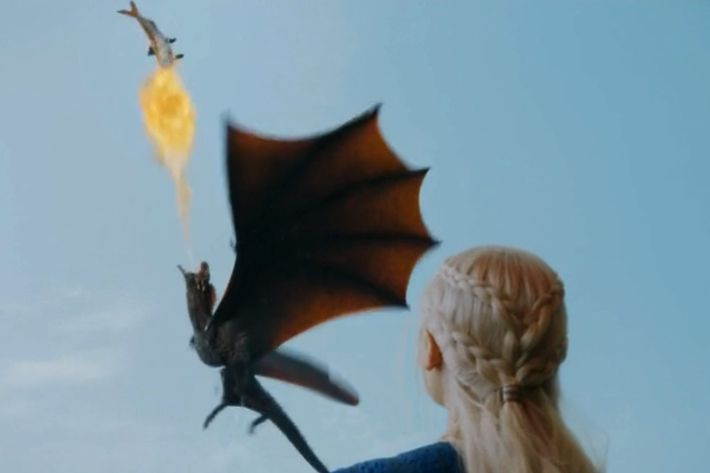 +Comments Leave a Comment
Game of Thrones: My, How the Dragons Have Grown!

g.o.a.t. 8:28 p.m.
Meryl Streep Proves She’s the G.O.A.T. By Not Knowing What It Means This is the greatest confusion of all time.
overnights 6:47 p.m.
Below Deck Recap: The Breast of Times, the Worst of Times Does anyone know what is going on with Jess?
the law 6:43 p.m.
Jussie Smollett Denies Faking Attack: ‘That’s a Bold-Faced Lie’ “That’s a bold-faced lie,” Smollett said about the hoax accusation.
chat room 5:59 p.m.
Norman Lear on Reintroducing the Classics The TV legend and his longtime producing partner Brent Miller talk about tonight’s live ABC revivals of ‘Diff’rent Strokes’ and ‘The Facts of Life.‘
respect the classics 5:22 p.m.
Prince William Is Simply Chuffed by AC/DC “It’s the best tonic for a Monday morning.”
vulture lists 4:53 p.m.
The Big Leap’s Biggest Leaps The Fox dance dramedy is full of risky elements, but season one proved again and again that it can stick the landing.
my debut single is dropping 4:53 p.m.
K-Pop Goes Punk With Xdinary Heroes’s Debut Single ‘Happy Death Day’ From Twice’s label JYP Entertainment.
switched on pop 4:30 p.m.
Alison Krauss and Robert Plant, ‘Beautiful Nugget’ Hunters  The Grammy-decorated duo reflects on the wide array of influences at work on their latest album Raise the Roof.
deaths 3:28 p.m.
Greg Tate, Author and Master of Criticism, Reportedly Dead at 63 Tributes to the influential music journalist honor his impact on the form.
stand-up 3:27 p.m.
Inside the Extremely Unfunny War Between Comedians and Spotify “For them to then pull down our work, it’s so nasty. It’s so corporate. It’s so ‘F - - - you.’”
influences 3:08 p.m.
Lindsey Jordan’s Long, Bumpy Road to Creative Control of Snail Mail “When I worked on Lush, I was so overwhelmed. I just wanted someone else to take the reins all the time.”
By Justin Curto
overnights 3:06 p.m.
The Bachelorette Recap: Rest in Pizza Bachelor Nation has had an intense year, so let’s just sit back and enjoy watching Will and Peter toss pizza-based insults at each other for a while.
vulture recommends 2:03 p.m.
Thumbelina Is the Showgirls of ’90s Cartoon-Princess Movies We love a high-budget flop.
the streaming wars 2:00 p.m.
FX on Hulu Is Now Just FX (But Still on Hulu) Disney’s kill count rises.
overnights 1:52 p.m.
PEN15 Recap: Death in the Family No Oakleys in the classroom.
tiny desk (home) concerts 1:45 p.m.
Olivia Rodrigo Takes ‘drivers license’ to the DMV for Tiny Desk “Definitely has some interesting vibes to it,” she said.
lawsuits 12:53 p.m.
Evan Rachel Wood Claimed Marilyn Manson Threatened to Assault Her Son “I am afraid he will seek retribution against me for testifying by harming me, our son, and members of my family.”
sit list 12:05 p.m.
Why Isn’t Anyone Talking About Roman’s Quirky Sits on Succession? The youngest Roy sibling consistently makes some of the most creative seating choices on television, and respect must be paid.
just press a button 10:00 a.m.
Fred Williamson Answers Every Question We Have About Black Caesar The Hammer remembers the guerrilla style of director Larry Cohen and how New York City provided a neighborhood full of free extras.
By Andrew Goldman
she's a maid 9:30 a.m.
Literally Any Meet-Cute Can Happen in a New York City Rom-Com Even if it could never happen.
More Stories