You’ve got another month to go until the release of Before Midnight, Richard Linklater’s highly anticipated follow-up to Before Sunrise and Before Sunset, which reunites talky lovers Celine (Julie Delpy) and Jesse (Ethan Hawke). And so, it’s time to make a decision: How much do you want to know before going in? Admittedly, Before Midnight isn’t the most plotty movie in the world, but for some people, even seeing pictures from this sequel is too revealing. If you’re one of those people, read no further, as Vulture’s got five exclusive stills from Before Midnight to debut. However, if you’re hankering for a closer look at the movie, scroll down and take in our teases. 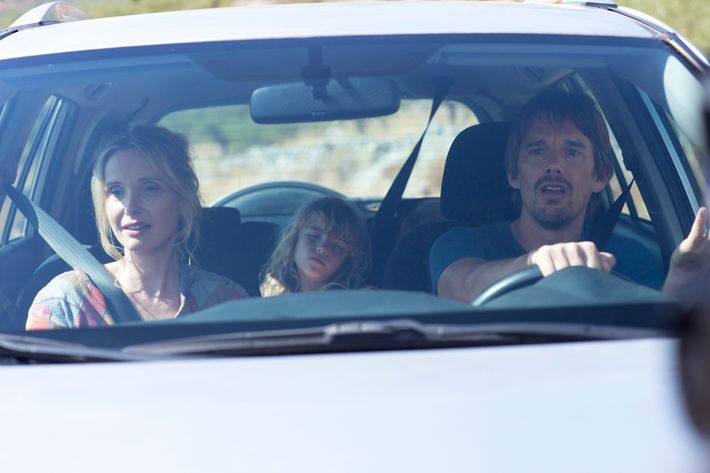 Here’s an image from the first act of the film, as Celine and Jesse drive down the Greek coast, their adorable twin daughters asleep in the backseat. 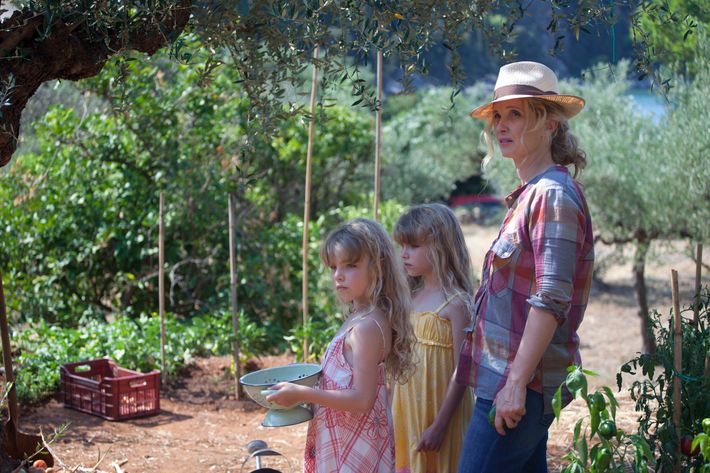 Yes, they have twin daughters. It’s like your Before Sunrise fan fiction came to life. Drink it in, guys. You’ve earned it. 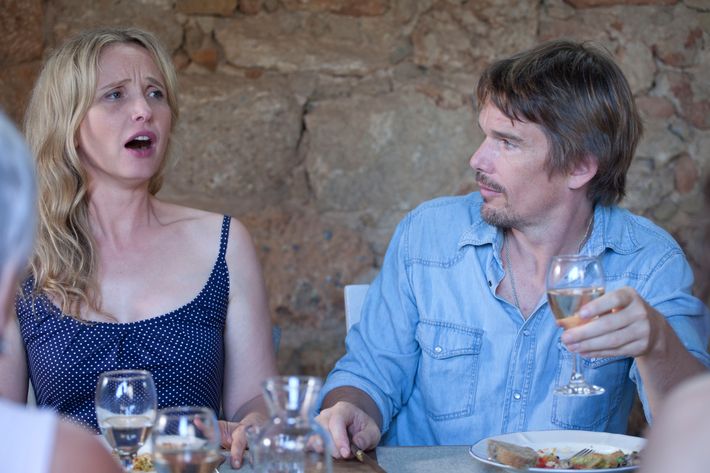 Later, Celine and Jesse have lunch with friends, and they launch into a freewheeling conversation about love, monogamy, and Skype. 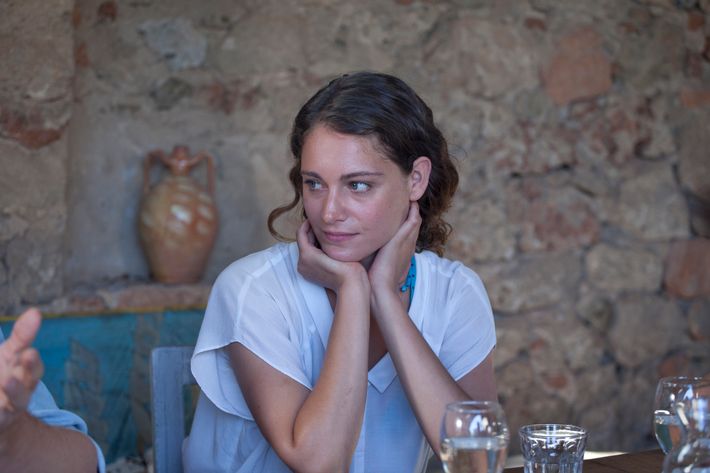 Here’s actress Ariane Labed as “Anna,” a young woman present at the lunch. Is she an enticing presence for the flirty Jesse? We’re not gonna say … 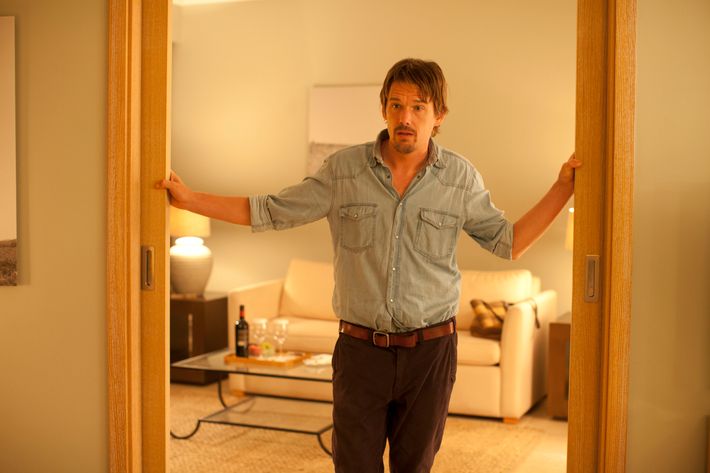 And here’s an image from later in the movie, where Celine and Jesse have an epic throwdown in their hotel room. We’d flip around to show you Delpy, but she’s topless for at least half of this scene. It’s a corker.

+Comments Leave a Comment
Get a Closer Look at Before Midnight

luk at tu! 3:53 p.m.
Julie Andrews Has a Favorite Minion It’s the one that says, “Hello!”
overnights 2:57 p.m.
RuPaul’s Drag Race All Stars Recap: Holy Trinity Y’all … is Trinity going to win this whole thing?
makin' moves 2:27 p.m.
J-Hope Is the First BTS Member to Announce Solo Album After Hiatus Out July 15, just two weeks before his headlining set at Lollapalooza.
daytime emmys 2:01 a.m.
The Young and the Restless’s Mishael Morgan Makes History at Daytime Emmys She’s the first Black woman to win Outstanding Lead Actress.
sdcc 2022 Yesterday at 9:47 p.m.
Marvel Studios Leaves Other Panels Shaking By Returning to San Diego Comic-Con They have not participated since 2019.
overnights Yesterday at 6:23 p.m.
Money Heist: Korea Recap: Internal Conflict Mmm, it’s not great that the heist has descended into complete chaos.
coming soon Yesterday at 6:10 p.m.
Everything We Know About Ahsoka, Star Wars’ Upcoming Live-Action Series Fans think the show will finally be a continuation of Star Wars Rebels.
dinner party Yesterday at 6:00 p.m.
Where Are You Sitting This Week? Will it be with Ed Sheeran, the January 6th Committee, or Dead-Eyed Brad Pitt?
movie review Yesterday at 5:38 p.m.
Savoring Flux Gourmet’s Satire of Celebrity Performance Art Peter Strickland’s art-world satire is funny, opulent, and filled with infinite sympathy when it comes to gastrointestinal distress.
bless his heart Yesterday at 5:35 p.m.
For the Chrisleys, What’s Next? “Everything that they say on the show can be used against them by the government.”
overnights Yesterday at 5:29 p.m.
The Bear Recap: Who Puts Ketchup on a Hot Dog? Carmen and Richie go to the burbs, make some food, and manage to dose a whole bunch of children.
dead alive, or host? Yesterday at 4:23 p.m.
Where We Left 7 Major Westworld Characters Heading Into Season 4 In a world where any human can be turned into a host, there’s really no such thing as death.
celebrity response Yesterday at 4:16 p.m.
Celebrities Respond to the Supreme Court’s Overturning of Roe v. Wade Celebrities including Viola Davis, Taylor Swift, and Michelle Obama respond to the Supreme Court’s decision.
now streaming Yesterday at 4:00 p.m.
What’s Leaving Netflix: July 2022 30 Rock seasons one through seven, Little Women, The Social Network, and more.
overnights Yesterday at 3:52 p.m.
Money Heist: Korea Recap: Crime and Punishment Against the Professor’s orders, Berlin uses fear to take control of the heist.
brave Yesterday at 3:44 p.m.
Thanks, Nancy She read a poem.
tv review Yesterday at 2:42 p.m.
Loot Is At Odds With Itself A perfectly pleasant but ideologically hollow comedy about an ultrarich girlboss? In this economy?
movie review Yesterday at 2:34 p.m.
There’s a Better Story The Black Phone Wishes It Could Tell Ethan Hawke and some excellent young actors are the real highlight of this horror movie from the director of Sinister.
now streaming Yesterday at 1:28 p.m.
The 6 Best Movies and TV Shows to Watch and Stream This Weekend A bombastic rock biopic, a little seashell who could, and a stressed-out sandwich chef are some of our picks of the week.
shake rattle and roll Yesterday at 1:00 p.m.
Onscreen Elvises, Ranked It’s hard not to get lost inside an impression when playing the King.
More Stories