Tonight’s MTV Movie Awards were a pretty big mess, as usual — with stars stumbling over their cue cards, seemingly random musical performances, and both “Best Kiss” and “Best Shirtless Performance” presented without any actual kisses or naked pecs on stage. One of the best moments involved Kerry Washington presenting her “on-screen husband” Jamie Foxx with “The Generation Award” (we have no idea, either). It should not have been a surprise that the camera would then cut to Foxx, and indeed he smiled modestly as honorees in the audience are wont to do. And then the smile faded and he took a wad of gum out of his mouth. Was nobody trying at all? 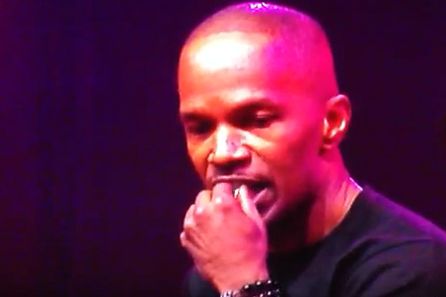 vision 2020 2:49 p.m.
Kanye West Is Trying to Get on the Ballot in Two More Purple States What’s good, Virginia and Minnesota?
snail mail 2:07 p.m.
Taylor Swift Wants You to Vote Early to Get President Trump Out of Office “He is well aware that we do not want him as our president.”
vulture lists 2:00 p.m.
Every Netflix Original Movie, Ranked Taking stock of the service’s best — and worst — films.
respect the classics 12:43 p.m.
Led Zeppelin’s ‘Stairway to Heaven’ Trial Could Climb to the Supreme Court Hottest gig of the year?
horny summer 11:13 a.m.
Cardi B Brought a Bucket and Mop for Her $100,000 Worth of ‘WAP’ COVID-19 Tests “It was kind of weird shooting the video in the age of corona.”
dnc 2020 12:22 a.m.
Colbert Takes Late Show Live for DNC With Bernie Sanders, Hillary Clinton Susan Rice and Elizabeth Warren will also stop by, virtually.
results may vary Yesterday at 11:41 p.m.
The Absurd Superpowers of Netflix’s Project Power, Explained Including the formidable power of … pistol shrimp?
politics Yesterday at 10:12 p.m.
Marge Simpson Heard What You Said About Kamala Harris Sounding Like Her “Lisa says she doesn’t mean it as a compliment.”
phew Yesterday at 9:02 p.m.
Despite What You May Have Heard, Annabelle Has Not Escaped Her Museum Display Wouldn’t put it past her, though.
2020 dnc Yesterday at 8:17 p.m.
Billie Eilish, the Chicks to Perform at Democratic National Convention Musical acts are scheduled for each night of the four-day event.
overnights Yesterday at 7:09 p.m.
Ziwe’s Instagram Live Show: ‘One Black Enemy’ Re: Baited, comedian Josh Sharp goes full steam ahead while Bachelor Nation’s Taylor Nolan runs into some technical difficulties.
now streaming Yesterday at 6:30 p.m.
The 40 Best Horror Movies on Amazon Prime Hereditary, Suspiria, The Ring, and more.
theater review Yesterday at 6:07 p.m.
How Parents, Children (and Playwrights) Made Oedipus Rex and Antigone at Home Sophocles in Staten Island is a family affair.
clueless Yesterday at 5:20 p.m.
Clueless Spin-off About Dionne Plows Through Stops Signs and Lands at Peacock Focused on her life at Bronson Alcott High School without Cher.
quarantining Yesterday at 5:10 p.m.
January Jones Just Playing With Her January Jones Dolls at This Point Emma Frost Versus Betty Draper: Dawn of Plastic.
the inside track Yesterday at 5:07 p.m.
Burna Boy’s ‘Level Up’ Is Better Than a Victory Lap Twice As Tall’s opening track revisits Burna Boy’s wild recent rise, and also makes clear that he’s not getting complacent.
By Justin Curto
recasting Yesterday at 4:58 p.m.
Tig Notaro to Replace Chris D’Elia in Zack Snyder Zombie Movie D’Elia’s part had already been filmed, so Notaro will take over via green screen.
song review Yesterday at 4:37 p.m.
Somehow, Somewhere Drake Is Still One of Us Drake can buy and sell most of us, but he watches games from the sidelines like everyone else.
By Craig Jenkins
anniversaries Yesterday at 4:33 p.m.
Brie Larson’s Fake Band Remains the Best Thing About Scott Pilgrim vs. the World On the movie’s tenth anniversary, we recommend the great fictional rock band Clash at Demonhead.
By Rebecca Alter
side hustles Yesterday at 4:02 p.m.
Which Erstwhile Disney Star Has the Better Utterly Random TV Show? Selena Gomez and Zac Efron both host series completely unrelated to their previous work. Why? We can’t answer that. But we can say who does it best.
More Stories