As Vulture has noted before, the No. 1 Ke$ha talking point — before the glitter and the ghost sex and the excellent songwriting — was that the singer brushes her teeth with Jack Daniels. That “Tik Tok” lyric became shorthand for the entire Ke$ha-don’t-care ethos, which is why we were so surprised to hear her singing about responsible dental hygiene in 2012’s “C’mon.” But it doesn’t stop there; last night, on the premiere of her MTV docu-series My Crazy Beautiful Life, Ke$ha interrupted a wild-and-crazy tour montage for some very responsible tooth-brushing. On national television! She is an example for the children; get this woman a Trident sponsorship. 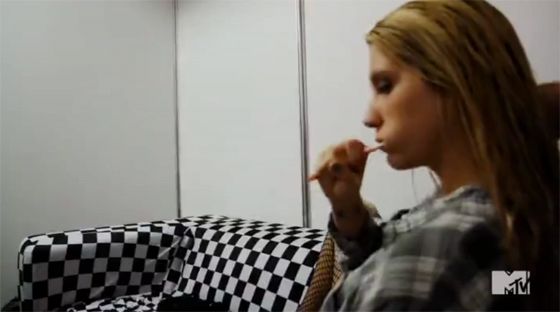 It was not exactly groundbreaking television, but we did not see any real vomit. Ke$ha: a role model for our time.

media digest 11 mins ago
Jeffrey Toobin, Who Still Had a Job After That, Exits CNN Nearly two years after masturbating on Zoom, he’s getting himself off — the network, that is.
emergency discussion 15 mins ago
Where Does For All Mankind Go From Here? We have some humble suggestions/demands for season four.
what we know 19 mins ago
Salman Rushdie Stabbed and Seriously Wounded During Speech in New York Acclaimed author Salman Rushdie was seriously wounded Friday when an assailant ran onstage and attacked him.
tributes 24 mins ago
Ellen DeGeneres, Rosanna Arquette, and More Remember Anne Heche “This is a sad day.”
overnights 5:20 p.m.
Pretty Little Liars: Original Sin Recap: Meet Me in the Hall of Mirrors It kind of feels like the Y2K Mom Squad didn’t learn the lessons they should have from Angela’s tragic death.
lethal lyrics 4:52 p.m.
Megan Thee Stallion’s Traumazine Bars Humiliate Her Haters Thee most savage lyrics from her sophomore album.
party report 4:40 p.m.
Never Have I Ever’s Maitreyi Ramakrishnan Wants to Be the Next Veronica Sawyer The Never Have I Ever star is ready for Broadway.
overnights 4:00 p.m.
A League of Their Own Recap: A Taste of Victory Who’s ready for a new adventure?
feeling stuck 4:00 p.m.
A Movie So Ideal for the End of Summer That It’s Actually Called Fall Head empty, just tower.
overnights 3:40 p.m.
The Devil Is a Part-Timer! Recap: A Return to Form A welcome change of scenery and a chance to get back to basics.
finale thoughts 3:15 p.m.
For All Mankind’s Wrenn Schmidt Thought ‘This Might Be It’ for Margo “Margo is making choices every step of the way, making the best choice she can in terrible circumstances.”
overnights 3:00 p.m.
Never Have I Ever Recap: Love Is a Battlefield It’s Valentine’s Day, which means relationships end left and right.
vulture lists 3:00 p.m.
All 13 Marx Brothers Comedies in the Order You Should Watch Them Enter the Marx-verse, where no cow is too sacred or authority too high to undermine.
rip 2:47 p.m.
Anne Heche Dead at 53 Following Car Crash The actress had suffered severe injuries following the crash.
overnights 2:24 p.m.
Surface Recap: Excess Baggage Sophie’s trippy evening reveals interesting things about Baden, James, and Caroline.
what a tease! 1:51 p.m.
Beyoncé, Professional Tease, Releases an Almost Music Video for ‘I’m That Girl’ Now can she try being “that girl” who releases music videos?
comedy review 1:12 p.m.
This Fool Is What Streaming Comedies Should Be And a just world would give us several more years of it.
By Kathryn VanArendonk
breakups 12:35 p.m.
Michelle Branch Announces Her Separation From Black Keys’ Patrick Carney Branch was arrested for misdemeanor domestic assault shortly after the announcement.
dinner party 12:09 p.m.
Why Are We Watching Industry? On the perverse pleasures of witnessing the worst people do the worst possible things.
housewives institute bulletin 12:00 p.m.
The Ultimate Real Housewives Trivia Quiz Brought to you by the esteemed members of the Housewives Institute. How many can you get right?
More Stories