[Minor spoiler alert for those who haven’t yet seen the season 6 premiere.] On tonight’s Mad Men, Roger’s mother’s funeral was strangely dry. Well, right up until Don showed up — bleary-eyed and with drink already in hand. “Mother did not approve of libations,” Roger mentions in his opening remarks, and after he hands the stage over to Mrs. Hazel Tinsley (“who graciously flew up from Palm Beach”). It doesn’t take long to for Don to steal the spotlight with some gastrointestinal grieving in the corner. It’s not the first time we’ve seen the men of Mad Men’s drinking habits go from classy to trashy: Roger’s epic oyster-filled barf from season one stands to challenge Don’s gagging tribute. Which one of the SCDP partners makes you never want to drink again?

First, a Don refresher course. Vomiting does not trump etiquette: He politely turns away from the crowd while depositing his liquid lunch by the umbrella stand. And you gotta give it to him: He never spills his drink. 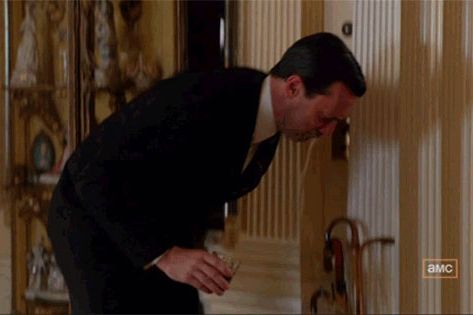 And then there’s Roger. If you recall, his impressive vomit from season one’s “Red in the Face” is all thanks to Don, whose revenge for Roger hitting on Betty reveals itself to be a martini-fueled lunch that turns into (whoops!) a broken elevator and 23-floor walk-up. Those two elements, a room full of clients and a spotless carpet make for the perfect spew. 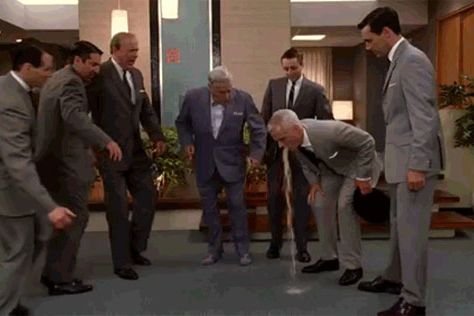 So who spit it best? While Don’s might be fresh (ew, sorry) in your mind, we still have to go with Roger. His sick has the most magnificent length, texture, and beauty. Save this one to your hard drive.

calling all readers! 25 mins ago
Las Culturistas Teach The View How to Pronounce ‘Las Culturistas’ Now your mom knows about Fire Island, for better or worse.
the claw 1:16 p.m.
Diving Headfirst Into Squishmallows at VidCon To Squish or not to Squish.
vulture 10x10 12:52 p.m.
The Podcast Puzzle 1-Across, Nine Letters: Genre parodied by Only Murders in the Building.
overnights 12:45 p.m.
Ms. Marvel Recap: Karachi Blues A detour to Pakistan is filled with quiet moments and meaningful exposition.
vulture lists 12:00 p.m.
10 Bombastic Action Movies to Watch After RRR For anyone craving more explosions from Tollywood, Bollywood, and far beyond.
trailer mix 12:00 p.m.
High School Musical: The Musical: The Series Trailer: What Time Is It? Summertime!
chat room 10:51 a.m.
The Bear’s Lionel Boyce Didn’t Bake Those Doughnuts, But He Did Glaze Them “I tried to make doughnuts, and boy, did I burn those. It’s not easy.”
arrests 10:41 a.m.
Everything We Know About YSL’s RICO Case The 88-page grand-jury indictment characterizes YSL, “Young Slime Life,” as a “criminal street gang” and alleges 182 instances of criminal activity.
backstories 10:30 a.m.
The Community Effort Behind Muna’s Taylor Swift–Inspired ‘Kind of Girl’ “We wanted a kind of Swiftian, middle-of-the-album, heart-wrenching track.”
By Justin Curto
trailer mix 10:25 a.m.
See How Saoirse Ronan and Sam Rockwell Run Now what in the Benoit Blanc is going on here?
putting the atoms together 10:00 a.m.
‘No Aliens, No Spaceships, No Invasion of Earth’ An oral history of Contact, the sci-fi movie that defied Hollywood norms and made it big anyway.
By Rachel Handler
rip 9:30 a.m.
Remembering Nick Nemeroff, a Master of Misdirection The stand-up, who died recently at age 32, had a unique superpower.
meat deets 9:09 a.m.
The Bear’s Ebon Moss-Bachrach on the Art of Playing the Obstacle “No one ever told me to pull back, which I’m shocked about, and maybe was a mistake.”
good boy 9:00 a.m.
Channing Tatum’s Himbos, Ranked On the tenth anniversary of Magic Mike, let’s revisit all of Channing Tatum’s sweet, dumb hunks.
dressing up 1:45 a.m.
Okay, Now Where Is Michael Cera’s Barbie Look? I will not rest until I see Cera rollerblading by the beach.
rip 1:13 a.m.
Margaret Keane, Sad-Eyed Waifs Artist, Dead at 94 Amy Adams played the painter in the film Big Eyes.
pilot pick ups Yesterday at 9:15 p.m.
Freeform’s AZNBBGRL Finds Its Baby Girls From The Flight Attendant’s Natalie Chaidez and Wu-Tang: An American Saga’s Dinh Thai.
overnights Yesterday at 8:27 p.m.
Money Heist: Korea Midseason-Finale Recap: Hostage Check Part one arbitrarily ends with plenty of questions and the standard Money Heist cliffhanger.
overnights Yesterday at 8:00 p.m.
The Bear Season-Finale Recap: Let It Rip The crew starts a new chapter as they reconcile with the pain from the past.
hospitalization Yesterday at 7:41 p.m.
Travis Barker Has Been Hospitalized His new wife, Kourtney Kardashian, is by his side.
More Stories