From time to time, there are issues so divisive that they threaten to tear apart the entire Vulture staff and, if left untended, could destroy the very fabric of reality as we know it. It is incumbent on us, then, to address these issues in a manner befitting their extreme importance. Today’s hot topic: Should we be excited about Baz Luhrmann’s The Great Gatsby? Kyle Buchanan and Amanda Dobbins will now work through their anxieties.

Amanda: Kyle! After months (years, really) of staring across the bay at Baz Luhrmann’s very bright green light, the moment is upon us. We finally get to watch Leonardo DiCaprio throw shirts and to hear what money sounds like as interpreted by Carey Mulligan’s American accent. It is very exciting — or at least I think it is, despite the six-month delay, the poorly Photoshopped posters, and the loud, histrionic trailers. Are these warning signs, Kyle? Should we be excited, or should we prepare ourselves for a less-than-glittering Great Gatsby?

Kyle: I understand why you might have reservations, Amanda. I mean, from the jump, the notion of “Great Gatsby in 3-D” sounds totally parodic … and yet, that’s why I’m excited about it. I realize that this crazy, bug-eyed, hellzapoppin FX extravaganza was maybe not the Gatsby that a reader would have had in mind, but as a moviegoer, I’m sort of psyched. It might be utterly ridiculous and campy and messy — in fact, the trailers practically promise that it will be — and I’m okay with that! If it’s a low-key Gatsdaptation you want, you’ve got plenty to choose from, whether it’s the Robert Redford version or some random TV movie they made in 2000 with Mira Sorvino as Daisy and Paul Rudd as Nick. (Not lying — that happened.) So if Luhrmann wants to go way, way over the top with his version, turning West Egg into a gaudy 3-D bauble, I say we should let him and try to enjoy the ride. What are your reservations? Let’s take them one by one …

Amanda: Truly, I do understand the appeal of unexpected and drug-addled Luhrmann literary adaptations; Romeo + Juliet taught my preteen heart what it was to love. (Or what it was to rewind that first close-up of Leo over and over until the VHS broke, which is the same thing. My heart still leaps at the introduction to “Talk Show Host.”) But there is a fine line between “spectacle” and “mess,” and frankly, the new release date makes me think Gatsby is slipping into the second category. Has a delay ever been a good omen for a movie?

Kyle: It worked out pretty well for another DiCaprio classic: Titanic was shifted from the summer of 1997 to the end of the year, and though everyone assumed the delay augured a bomb in waiting, it ended up the highest-grossing film of all time. I don’t think Gatsby’s going to breathe that rarefied air, but there is something novel about plunging it into the superhero-choked summer movie season, isn’t there? I love the idea that Iron Man 3 will be forced to surrender 3-D screens to a Carey Mulligan movie set in the twenties.

Amanda: I do worry about Leo fatigue. How many times have we seen him red-faced and screaming directly into a camera?

Kyle: But it isn’t all screaming! For the first time in ages, Leo looks like he’s actually having fun. (Well, he looked like he was having some fun in Django Unchained, but we couldn’t really rally behind the ways that Calvin Candie got his kicks.) It’s funny that DiCaprio used to have this reputation as a womanizer and a party boy, and yet onscreen as of late, he’s had so few women to romance and so few parties to go to. Fortunately, Luhrmann comes along to let him do both. How do you feel about Carey Mulligan and Tobey Maguire? I love me some Carey, and I love how big she’s playing that role, though you may differ. And Leo + Tobey gives me the awws.

Amanda: I am always Team Carey, even if she’s too smart and vibrant to entirely disappear under Daisy Buchanan’s cloche hats. As for Tobey, well, here are my thoughts:

Kyle: Remember how we laughed when we saw that first trailer with “No Church in the Wild,” like, Is Baz really going down this road? But now that we’ve had time to adjust to that epic-seeming soundtrack listing — Florence! Lana! Gotye? — it seems less ridiculous and more … well, it still seems ridiculous, but in the BEST way. It doesn’t just remind me of Luhrmann’s Romeo + Juliet soundtrack; it reminds me of a bygone era where these sample-platter soundtracks were de rigueur.

Amanda: Honestly, “No Church in the Wild” is the most reassuring decision that Baz Luhrmann has made so far. It’s a very good trailer song! And if that song is the sort of creative output that comes from putting Baz, Leo, and Jay in a room together, then I have hope for this movie overall.

Amanda: Except we must discuss the posters. Kyle, have you seen these posters? 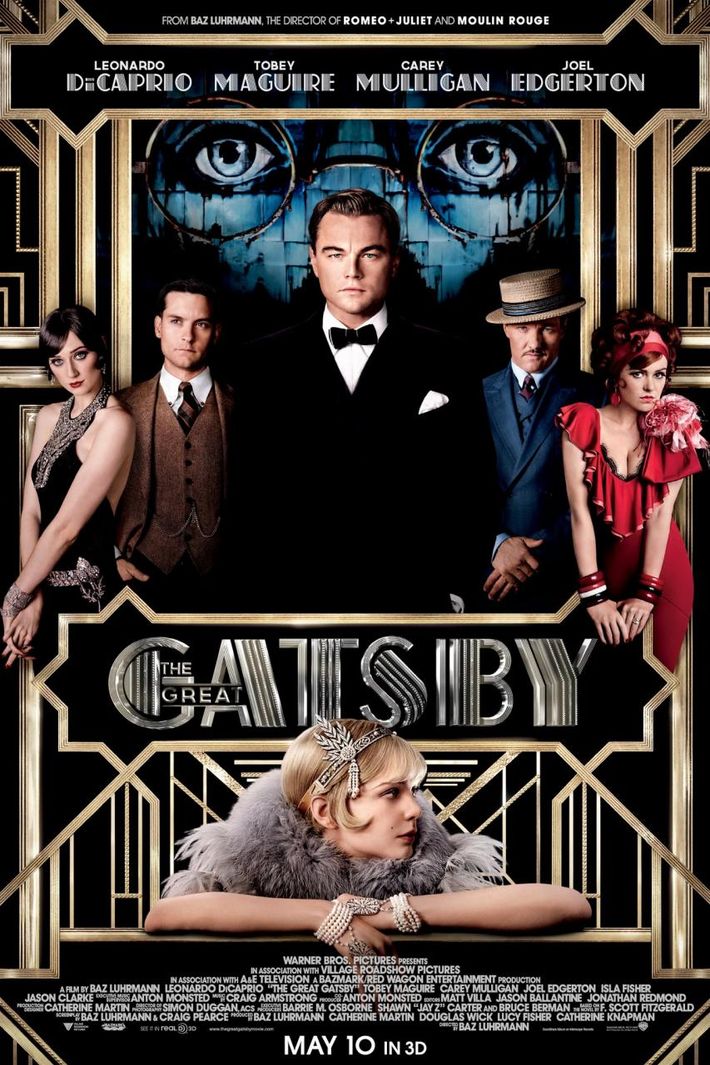 Kyle: I have. Here, I must agree with you. Why do everyone’s faces look so weird? Did the stars really vet these? And is it just me, or is every Gatsby character poster in the city of Joel Edgerton, for some reason? That is maybe not the actor I would be selling from that movie.

Kyle: We’ve been talking around the look of the movie for a while, but we should probably tackle it head-on. Is it too much for you? Do you see all of the vertiginous lunges into the 3-D frame, or all of the confetti-strewn party scenes, and feel like this look does not compute? Initially, I felt that way, but I think the trailers have gotten me acclimated. Baz Luhrmann is going to justify that 3-D in every scene, and that’s more than most movie-makers, who simply use it to goose the box office receipts. I’m curious, at least.

Amanda: In case the Tom Hooper joke earlier did not compute: Yes, the trailers are overwhelming. And I am worried about eye-stamina — two-plus hours of that swoop-cam seems daunting. I’ll give him a pass on the parties, though. Baz Luhrmann is very good at parties.

Kyle: Let’s conclude by switching roles for a moment: I’ll name one thing about Gatsby that worries me, while you name one thing that you’re excited for. Worrisome: Baz Luhrmann almost cast Blake Lively as Daisy Buchanan.

+Comments Leave a Comment
Should We Be Excited for The Great Gatsby?

the law 22 mins ago
Nicki Minaj Claims Her Silence Around Harassment Suit Was an ‘Innocent’ Mistake Minaj’s husband is also being sued.
overnights 25 mins ago
The Bachelorette Season-Premiere Recap: Love Notes When your lead tells you to be authentic, vulnerable, and open, dammit, you better be authentic, vulnerable, and open!
obituary 1:50 a.m.
Christopher Ayres, Voice of Frieza in Dragon Ball Series, Dead at 56 Ayres has been credited over 200 times during his voice-acting career.
overnights Yesterday at 11:20 p.m.
Impeachment: American Crime Story Recap: A TV Show of a TV Show “That woman.” Perhaps the two most famous words Bill ever uttered.
overnights Yesterday at 11:00 p.m.
Queens Series-Premiere Recap: The Band Is Back Together ABC’s show about a female hip-hop group from the ’90s is the musical drama we didn’t realize we needed.
girl boss Yesterday at 10:45 p.m.
Uma Thurman Cast As a Girl Boss in Showtime’s Super Pumped Gaslight, gate-keep, call an Uber.
overnights Yesterday at 10:30 p.m.
Vanderpump Rules Recap: Breakdown at Tiffany Raquel’s family history is the new Katie Maloney falling through a skylight during a photo shoot — we must know everything.
penn b Yesterday at 9:37 p.m.
Cardi B And Penn Badgley Fangirl Over Each Other On Twitter Cardi B and Penny B collab coming soon!
controversy Yesterday at 8:30 p.m.
Netflix’s Ted Sarandos ‘Should’ve Led With Humanity’ in Latest Interview The Netflix employee walkout is still scheduled for Wednesday morning.
hollywood connections Yesterday at 7:33 p.m.
Mama HAIM Taught Art to Paul Thomas Anderson, says Baby HAIM “I drink your milkshake” was actually a quote from the playground.
uba+ Yesterday at 6:20 p.m.
Katie Couric Calls Matt Lauer’s Behavior ‘Devastating But Also Disgusting’ The Morning Show, it turns out, is a documentary.
overnights Yesterday at 5:15 p.m.
I Know What You Did Last Summer Recap: She So Wishes She Was You The longer the show goes on, the messier it feels.
videology Yesterday at 3:17 p.m.
Willow and Avril Lavigne Are Pop-Punk Giants in the ‘G R O W’ Video With an appearance from fellow young punk KennyHoopla.
music videos Yesterday at 3:12 p.m.
Summer Walker and JT Pull Up With the ‘Ex for a Reason’ Video And they’re coming to you as women.
overnights Yesterday at 2:56 p.m.
Only Murders in the Building Season-Finale Recap: We Are All Tim Kono The finale ties up enough loose ends to satisfy but holds on to some unfinished business to keep the story going.
rock star & the mole woman Yesterday at 2:40 p.m.
A Timeline of Roman and Gerri’s Succession Sexual Tension For all you disgusting little slime puppies.
switched on pop Yesterday at 1:59 p.m.
The Escapist Male Fantasy of the James Bond Theme Song  Exploring the superspy’s musical underpinnings as the Daniel Craig era draws to a close.
dunes Yesterday at 1:51 p.m.
What Do You Need to Know About Dune Before You Watch Dune? It’s about dunes.
the industry Yesterday at 1:22 p.m.
How Will Netflix Clean Up Its Latest Mess? The earnings call is today, the walkout is tomorrow, and the internal strife is not going away.
a long talk Yesterday at 1:12 p.m.
Sera Gamble Is Comfortable Inside Joe Goldberg’s Head You’s showrunner gives the lowdown on the low-down stalker we can’t stop watching.
By Valentina Valentini
More Stories