Amanda Bynes, who has been having an especially rough few days, launched what seems to have been an unprovoked Twitter attack on Rihanna, though she quickly deleted the tweets. Of course, there are screenshots. Bynes’s messages included “@rihanna you look so ugly tryin to be white” and “@rihanna Chris brown beat you because you’re not pretty enough” and the claim that she almost named her new dog after Rihanna, but not in the nice way. Rihanna’s response was relatively restrained. 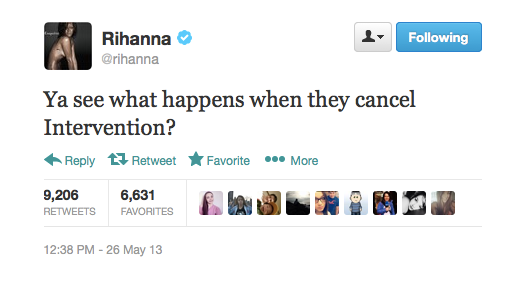 Bynes then posted, “@rihanna unlike ur fugly faced self I don’t do drugs! U need the intervention dog! I met ur ugly face in person! U aren’t pretty u know it!” The New York Daily News wondered if this has something to do with Bynes’s complicated feelings about Rihanna’s ex, Drake, but we’re pretty sure it doesn’t matter at this point.

ask an expert 5 mins ago
Could Amber Heard Really Win Her Appeal Against Johnny Depp? The never-ending case continues — with a new twist.
into it 16 mins ago
Yellowstone’s Brand of White Grievance Is Free-Range and Organic A talk with Tressie McMillan Cottom about the blockbuster show’s soft politics, and whether Taylor Sheridan is “the white person’s Tyler Perry.”
tv review 8:00 a.m.
House of the Dragon Is Built on a Shaky Foundation One thing’s for certain: This prequel is definitely a Game of Thrones series. As for what else it is, that’s harder to say.
my single is dropping 12:13 a.m.
Maren Morris and Zedd Meet in the Middle Once Again for ‘Make Me Say’ The new track is Zedd’s first time returning to a collaborator.
my single is dropping 12:08 a.m.
The Born Pink Era Begins Now Blackpink drop “Pink Venom,” their first comeback single in nearly two years.
overnights Yesterday at 10:01 p.m.
Southern Charm Recap: Kiss and Yell It’s Charleston’s next-morning-brunch equivalent: everyone debriefing the previous night, hungover in their respective homes.
the law Yesterday at 10:01 p.m.
FBI Says Rust Gun Could Not Fire Without Trigger Pull Contradicting Alec Baldwin’s prior claims.
reflecting Yesterday at 9:26 p.m.
Trevor Noah Reflects on Viral Kanye West Daily Show Segment “All of us should have an opportunity at redemption.”
overnights Yesterday at 9:00 p.m.
Rap Sh!t Recap: #MiaCulpa Mia becomes social media’s main character.
want the world to kno-ow Yesterday at 6:32 p.m.
Tevin Campbell Is Ready to Come Out — Officially “Every person in the world isn’t straight. Get over it,” said the “Can We Talk” singer.
so random Yesterday at 6:29 p.m.
The Biggest Plot Twists in the Simon & Schuster Antitrust Trial The publishing world’s inner workings come to light.
damage control Yesterday at 5:57 p.m.
Brad Pitt’s Foundation Settles With Katrina Victims for $20.5 Million He and his Make it Right Foundation were sued for building poorly constructed homes after the hurricane.
media news media news Yesterday at 3:50 p.m.
Reliable Sources at CNN Say Reliable Sources Is Done CNN is saying good-bye to both the show and its host, Brian Stelter.
overnights Yesterday at 3:49 p.m.
American Horror Stories Recap: Reflection and Refraction Bloody Mary … Bloody Mary … Bloody ahh, we’re too scared to say it!
overnights Yesterday at 3:48 p.m.
Pretty Little Liars: Original Sin Recap: Knives Akimbo Our Final Girls are making some astounding leaps of logic.
tributes Yesterday at 3:30 p.m.
Ellen DeGeneres, Rosanna Arquette, and More Remember Anne Heche “This is a sad day.”
buffering Yesterday at 3:20 p.m.
House of Questions: All Eyes on HBO’s Dragon What’s at stake for HBO Max — and the Game of Thrones franchise — in the weeks ahead?
tragedy plus time Yesterday at 3:16 p.m.
Jennette McCurdy Says Her Old Ariana Grande Jealousy Is ‘Comedy Gold’ “To be on set at 21, where you’re just the most susceptible to jealousy … and I’m there across from a burgeoning pop star of the day.”
overnights Yesterday at 2:05 p.m.
She-Hulk: Attorney at Law Series-Premiere Recap: Better Call Walters Turns out controlling her Hulk is actually NBD for Jennifer Walters. Sorry, Bruce.
overnights Yesterday at 1:12 p.m.
Harley Quinn Recap: I’m Going to Become the Mayor This week’s Joker-centric spinoff is a roller coaster — at times literally.
More Stories