A couple of weeks ago, we talked to the creator of the full Dothraki language for HBO’s Game of Thrones, David J. Peterson, and it got us wondering about its practical applications. We know how effective Dothraki is when barking at someone in a medieval fantasyland; it sets the perfect tone for something like, “I will rape their women, take their children as slaves, and bring their broken gods back to Vaes Dothrak!” (Anha aqorisok chiories mori, vazzafrok yal mori, ma afichak vojjor samva Vaesaan Dothrak!) But how does it work when you’re trying to quote pop culture? We issued Peterson a challenge: Translate eight famous catchphrases to see how they sound in Dothraki. Turns out “That’s what she said” is a lot more menacing, and “I am the one who knocks” sounds a lot nerdier! See the translations of these and more, with audio files by Peterson to help with your pronunciation.

(And yes, we did ask him to translate Don Draper’s “That’s what the money’s for” but we forgot that the Dothraki don’t have a word for “money.” Silly us.)

“We are never ever ever getting back together” — Taylor Swift

“We are never ever ever getting back together.” (Taylor Swift) clip 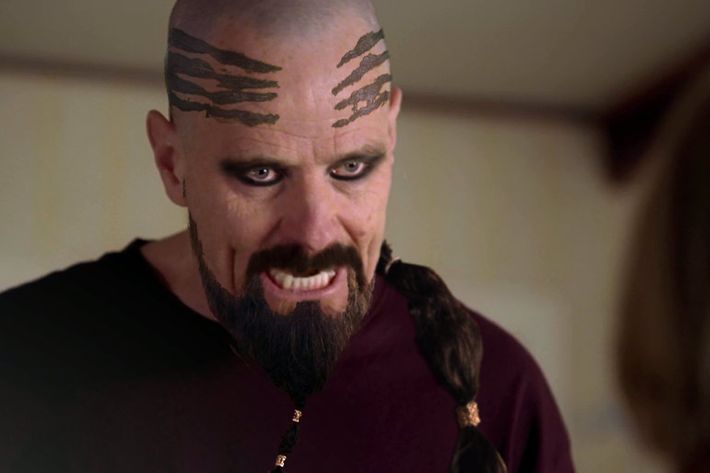 “I am the one who knocks.” — Walter White, Breaking Bad

“I’m the one who knocks!” (Breaking Bad) clip 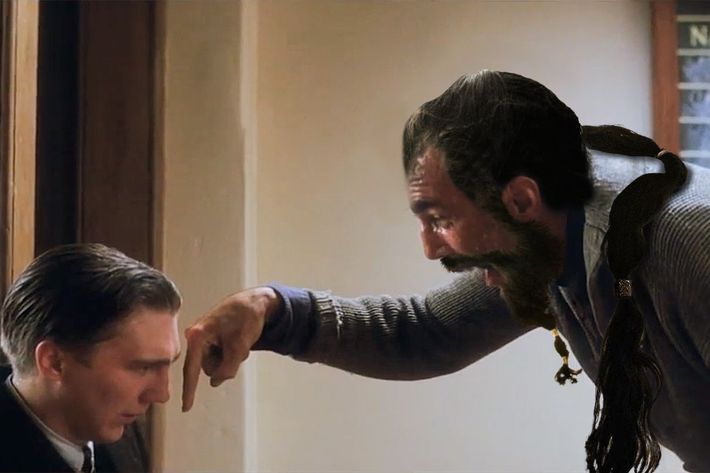 “I drink your milkshake.” — Daniel Plainview, There Will Be Blood

“I drink your milkshake.” (There Will Be Blood) clip 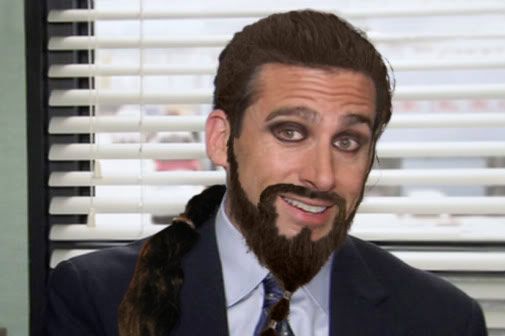 “That’s what she said.” — Michael Scott, The Office

“That’s what she said” clip 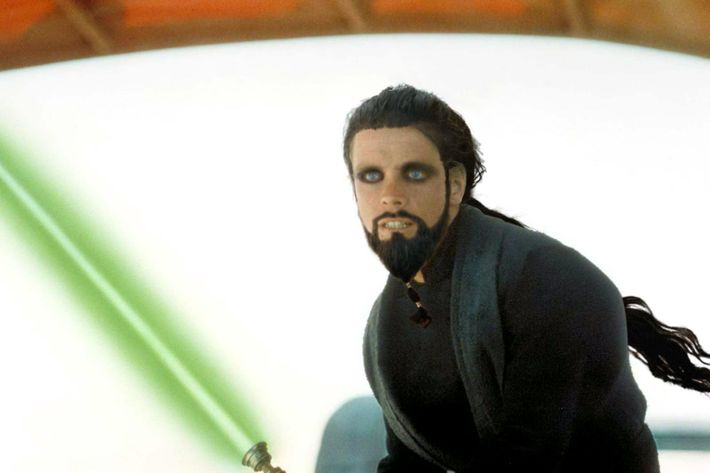 “May the force be with you.” — Star Wars

&ldqouMay the force be with you.” (Star Wars) clip 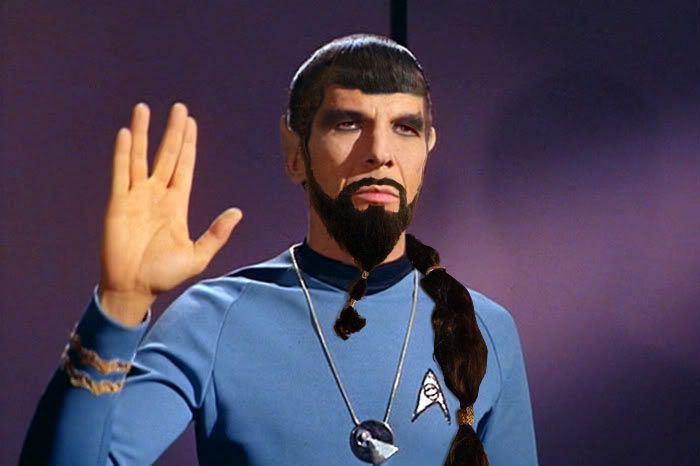 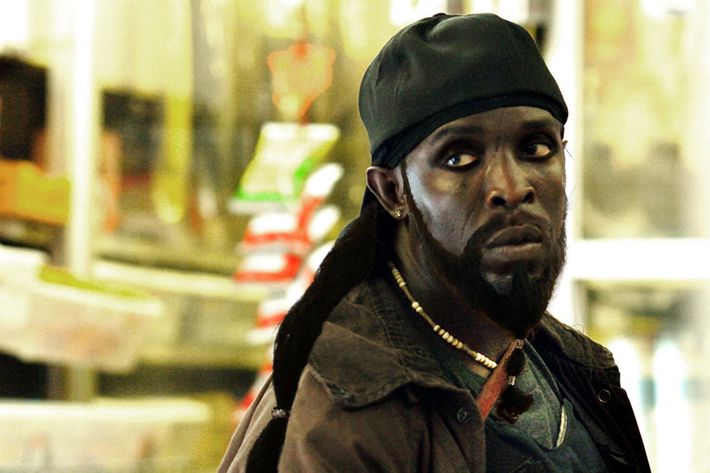 “You come at the king, you best not miss.” — Omar Little, The Wire

“You come at the king, you best not miss.” (The Wire) clip

“Talk to the hand ’cause the face ain’t listening.”

“Talk to the hand, ’cause the face ain’t listening.”:

“Talk to the hand, ’cause the face ain’t listening.” clip

into it 13 mins ago
Serial Killers Are Now Just IP Too Ryan Murphy tried not to center Jeffrey Dahmer in Dahmer, but that’s impossible considering he’s the draw.
the grub street diet 6:00 a.m.
Broti Gupta Dips Her Fries in Mashed Potatoes “I will answer for this act of potato cannibalism on Judgment Day.”
By Alan Sytsma
rip 2:11 a.m.
Comedian and Self-Declared ‘Love Goddess’ Judy Tenuta Dead at 72 The gum-chewing Grammy nominee converted audiences to her religion of “Judyism.”
midnights era 2:02 a.m.
Wait, Is Taylor Swift Just Giving Us Straight Answers? Not like the videogame. Or maybe exactly like the video game?!
overnights 1:30 a.m.
The Lord of the Rings: The Rings of Power Recap: Misty Mountain Hopelessness There’s a lot of desperation to go around in this episode and more than a few hopes dashed.
surprise surprise Yesterday at 11:53 p.m.
Ye Thought Wearing a White Lives Matter Shirt Would Be ‘Funny’ He addressed his Paris Fashion Week controversy in an interview with Tucker Carlson.
overnights Yesterday at 10:41 p.m.
Atlanta Recap: Mr. Chocolate and the Black Movie Factory What Van believes will be a quick adventure in a Tyler Perry–esque production turns into a pivotal moment for her as a mother.
theater review Yesterday at 10:00 p.m.
The Revived and Reinvented 1776 Is a Delight, If You Can Stand to Watch It If you’re going to stage this show despite all its problems, this is how to do it.
health Yesterday at 9:32 p.m.
Justin Bieber’s World Tour Is Officially Postponed Until the Spring He previously paused the tour due to facial paralysis caused by Ramsay Hunt syndrome.
overnights Yesterday at 9:01 p.m.
Ghosts Recap: Alberta’s Turn The female-empowerment vibes are at an all-time high over at the Woodstone B&B.
trailer mix Yesterday at 8:02 p.m.
RHOBH Reunion Trailer: It’s Kathy Hilton vs. Lisa Rinna “You are the biggest bully in Hollywood, and everyone knows it.”
under oath Yesterday at 6:46 p.m.
Kevin Spacey’s Sex-Abuse Trial Is Already a Mess Spacey, wearing a slate suit, snow-white shirt, and powder-blue tie, did not appear worried.
jinkies Yesterday at 6:02 p.m.
Mindy Kaling and Constance Wu Are Solving the Mystery of Velma The first teaser for HBO Max’s Scooby-Doo spinoff dropped at New York Comic Con 2022.
good one podcast Yesterday at 5:05 p.m.
How Sam Morril Gets Laughs Between Laughs “It’s almost like a hesi move in basketball. Like, how can I get my jump shot wide open?”
By Jesse David Fox
coming soon Yesterday at 4:53 p.m.
It’s a-Here, Mario! Chris Pratt, look how you massacred our boy.
chat room Yesterday at 4:52 p.m.
John Macmillan Shot Laenor’s House of the Dragon Escape on His First Day on Set “It was a really stormy day, and we were out in the ocean in this massive hundred-year-old boat.”
future trash Yesterday at 4:27 p.m.
John Waters, Pope of Filth, to Direct Adaptation of His Book Liarmouth “Maybe it’s fitting that my novel was shocking enough to jump-start the engine of my film career.”
overnights Yesterday at 4:24 p.m.
She-Hulk: Attorney at Law Recap: Murdock & Walters Charlie Cox’s Daredevil returns to the MCU — and begins flirting immediately.
best of 2022 Yesterday at 4:00 p.m.
The Best Video Games of 2022 (So Far) It’s been a really, really, really full year.
coming soon Yesterday at 3:45 p.m.
Glass Onion: A Knives Out Mystery Headed to Theaters After All But only for a week.
More Stories