In the past decade, the Fast & Furious series — known for its cheesy acting, NOS, and of course, ridiculous implausible-but-awesome stunt driving — has graduated from simple street racing to taking down a cargo plane (in the upcoming Fast & Furious 6). But until that movie comes out, the single best stunt remains Fast Five’s climactic vault heist, in which the gang decides to tow an entire bank vault through the streets of Rio De Janeiro like a waterskier. (Quick aside: We would watch a Fast & Furious movie that replaces the illegal street racing with illegal waterskiing.) The stunt left Vulture with one question, though: How realistic is that scenario? As in, is it possible by the laws of physics? In order to get a better idea of what it would take to steal a vault filled with $100 million in cash, Vulture consulted Dr. Randall Kelley, Ph.D., a physicist at Harvard, who supplied the math necessary to understand just what is going on, and how to make it happen in real life. Warning: scary equations ahead.

Preliminary math
Before testing out the plausibility of the vault scenario, Dr. Kelley needed to take some measurements.

The vault, according to street racer turned security expert Tej Parker (Ludacris), is “ten tons of top-of-the-line security.” Ten tons is equal to just under 9100 kilograms.

According to the chip Brian O’Connor (Paul Walker) finds in one of the vehicles, a dealer pack weighing 49 kilograms contains a million dollars in twenty-dollar bills. The heist is for 100 million dollars.

Adding the mass of the vault itself and the cash inside gives us the entire mass of what is being towed.

Now that we have those measurements, we can do some calculations. 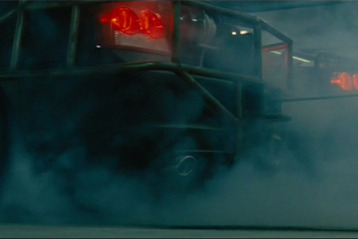 From just eyeballing the clips in which O’Connor and Toretto pull out of the police station, we judged that it took them fifteen seconds to get up to 50 miles per hour. “It’s conceivable they could accelerate with the thing… Can they accelerate as fast as the movie dictates? Probably not,” Kelley estimated.

According to our calculations, even when assuming that no work is being done by friction (i.e., there is no friction keeping the vault from moving), it would be impossible to get the vault up to speed as fast as it happens in the movie.

In other words, after 15 seconds of acceleration, the pair would be dragging the vault at only 2.3 miles per hour. According to a quick mental calculation, 2.3 mph < 50 mph. By a lot.

Kelley estimates that the vault is so heavy and moving slowly enough that practically anything it ran into would slow its momentum. At one point, the vault demolishes a bank. “Even if they could get the thing through the building,” he says “it would jerk back on the car to the point where they would lose their momentum. Each time it hit a pole it would jerk back, right? And then they’d have to reaccelerate.” 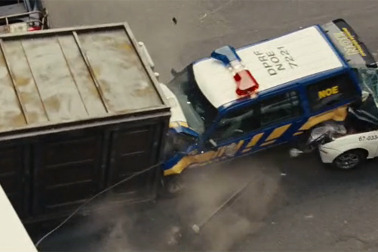 The turns present another obstacle: because the vault is so much heavier than the cars towing it, it carries the most momentum. Any sudden change in direction might cause the cars to lose control and get yanked in whatever direction the vault is traveling. In real life, if the cars were to take a quick 90-degree turn, the safe would hardly be affected by the vehicles’ change in direction. As the pair speeds down a long straightaway flagged by cops on all sides, the vault begins to swing from side to side, taking out bus stops, street lamps, and most important, cop cars. But, according to Kelley, in order to get that sort of swing, “What would have to happen is that there would have to be a coordinated move between the two of them. One [driver] would have to drift out while the other one sort of stays [on a straight trajectory] … You’d have to sort of give it a tug, and then let off … In order to get it to swing so dramatically, like fishtailing, [one driver] would have to come out, put it under tension to get it swinging, and then come back in.”

In the film, the pair swerve in a coordinated movement, which would cause the vault to simply follow the cars, but not swing as wildly as it does in the film. In addition, there is the problem of obstacles. “Every time they destroy one of these things [bus stops, etc], they’re losing momentum … They would probably damage some stuff but I don’t think they would be able to do it so cleanly.”

On the bridge
As Toretto prepares to charge at Reyes on the bridge, he spins his tires, which does nothing to increase his friction on the asphalt, but might have some beneficial effect. “This whole sequence bothered me in the sense that, once you get going, your horsepower kicks in. But while the wheels are spinning, spinning them faster doesn’t do you any good,” Kelley says. “I guess the idea is you rev your motor up, because you’re about to load the motor, so you get the thing spinning. Then you throw it in gear, pop the clutch, and lug the motor down, and I guess you have more angular momentum in your motor, so that when you engage the clutch, you get a nice lurch. So it’s less about the friction on the tires and more about getting the RPMs up in the motor.” 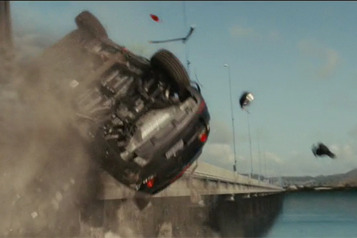 The final maneuver Toretto performs is to whip the safe around in a circular like a mace in order to smash on the pursuing SUVs. “The only way that would happen is if the friction on the tires was enough to anchor the movement, and my instinct would be no,” Kelley estimates. “Because if it had that much momentum and the safe’s that heavy, it would just rip the car with it.”

In order to test this theory, we calculated the impulse (the change in momentum of a body being acted upon by a force) of the vault as it continues to travel and Dom comes to a stop, to see how much Dom’s car would affect the vault in real life.

First, we calculated the initial momentum of the vault, Pv.

If the cable between the car and the vault is slack, then neither is really exerting any force on the other. So we calculated the impulse of the car within the first second of the cable going taut. This was done by mutiplying the static friction force of the car’s tires by the time interval.

Comparing the vault’s initial power with the car’s impulse is as simple as dividing the former by the latter.

Therefore, the vault is exerting more force on the car by a factor of 15.5. Rather than traveling in an arc around the car, the vault would simply rip the car along with it as it traveled along.

Making it plausible
The biggest issue affecting the plausibility of this scenario is acceleration. Getting a fifteen-ton vault up to high speed takes a lot of time and a long, straight, flat road. So hypothetically, how much power would be needed to get the vault up to 50 miles per hour in fifteen seconds? To get that answer, we need to alter the previously used acceleration equation, with which we can solve for P, the amount of horsepower needed.

O’Connor and Toretto would need more than 198,000 horsepower to move the safe as quickly as happens in the film. If we divide that number by the actual horsepower of a Dodger Charger, that gives us an idea of how many cars would be needed.

467 cars towing a single vault. The cast of 8 Fast 8 Furious is going to be pretty big. In conclusion, movies are fake.

+Comments Leave a Comment
Could the Fast 5 Safe Heist Happen in Real Life?

sequels 10:38 p.m.
Captain Marvel Sequel Officially in the Works With Writer Megan McDonnell Marvel is scouting for female directors.
my single is not dropping 9:57 p.m.
Lady Gaga Is Here to Warn You About the Dangers of Online Piracy “Can ya’ll stop?”
overnights 9:48 p.m.
The Real Housewives of New Jersey Recap: Beach Blanket Buffoons This is looking less and less like the actual Hamptons with every passing second.
respect the classics 5:56 p.m.
Aerosmith Drummer Sues Band for Sweet Exclusion, Loses A judge has now ruled against Joey Kramer’s lawsuit to perform with the band over Grammys weekend.
the law 5:44 p.m.
Accused Rapist Harvey Weinstein Distances Himself From Bill Clinton at Trial The mogul’s lawyers complained that prosecutors brought up his friendship with Bill Clinton on the worst possible day.
snl 5:18 p.m.
Tree-Size Man Adam Driver Hoists a Tree in His New SNL Promo He hosts the show for the third time this weekend.
respect the classics 4:47 p.m.
Relive the Glory of Rush and Neil Peart With Rare 2008 Colbert Report Interview “You’ve been touring for over 30 years. Do you ever get tired of being so awesome and kicking so much ass?”
close reads 4:05 p.m.
The Weekly’s Endorsement Episode Was a Failure And not just because the Times endorsed two candidates.
juice wrld 4:00 p.m.
Everything We Know About Juice WRLD’s Death The 21-year-old rapper died after a “medical emergency” at a Chicago airport during a federal search. His cause of death has now been confirmed.
true crime 3:25 p.m.
A Cat Lover’s Guide to Don’t F**k With Cats How to watch the Netflix true-crime docuseries without seeing any animal abuse.
a long talk 3:17 p.m.
‘We Weren’t Concerned With Making Anyone But Ourselves Laugh’ Monty Python’s Terry Jones reflects on his long career — and how the group’s work was almost lost to history.
By Mike Sacks
gay rights 3:06 p.m.
Dan Levy Has Joined the Kristen Stewart Gay Rom-Com Happiest Season Along with Alison Brie, Aubrey Plaza, and more!
right click 2:59 p.m.
Paramore’s Hayley Williams Drops Her Debut Solo Single, ‘Simmer’ The frontwoman is striking out on her own.
the law 1:28 p.m.
Annabella Sciorra’s Alleged Sexual Assault Described During Weinstein Trial “Annabella remembers at some point giving up the fight and just hoping it would end.”
explainers 12:44 p.m.
All Hell Has Broken Loose Within the Grammys The abrupt dismissal of Recording Academy CEO Deborah Dugan could become one of the biggest stories in the music industry since the Me Too era began.
last night on late night 12:26 p.m.
The Jonas Brothers Take a Break from TikTok to Go Day Drinking With Seth Meyers Jo Bros vs. Meyers Guy–ers
sundance 2020 12:00 p.m.
The 17 Movies We’re Most Excited to See at Sundance Film Festival Including a transatlantic thriller starring Jude Law, a family drama from Miranda July, and a portrait of up-and-coming performer Taylor Swift.
By Alison Willmore, Bilge Ebiri, and Rachel Handler
the grind 11:19 a.m.
How It Feels to Get Fired From Your Comedy Dream Job Ten former staffers from late-night shows, satirical websites, and online comedy outlets look back on the day they got the bad news.
By Brian Boone
trailer mix 11:17 a.m.
Taylor Swift Wants History on Her Side With Miss Americana Trailer Coming later this month to Netflix.
snl 11:01 a.m.
Will Ferrell Once Crashed the SNL Stage in Character on a Dare It was during a Puff Daddy rehearsal.
More Stories