Betty Hofstadt Draper Francis has not been Mad Men’s most beloved character. Early on, her petulance grated; later, her parental disengagement seemed downright cruel. She was defined by her denial and anxiety — and defined in relief against Don. Candid where he was mysterious. Desperate where he was cavalier. Tiny and blonde and from a “good” family, everything Don never was. Naive. Maybe a little pathetic. And this week’s “The Better Half” was a return to that format, with Betty being the anti-Don. Except this time it meant that Betty was confident and sardonic and willfully callous, while Don was the one unsure of his footing and setting himself up for self-recrimination.

Everyone in “The Better Half” is afraid. Peggy’s afraid of her neighborhood, so much so that she stabs her boyfriend with a makeshift harpoon. Roger’s grandson is afraid of Planet of the Apes. Roger’s afraid of not being in his son’s life, and Joan’s afraid he’ll change his mind. Megan’s afraid she’ll be punished for rebuffing her co-star’s sexual advances. Harry’s afraid of getting in the middle of things, and Don and Ted are afraid that the other one will be top dog. Pete’s afraid he’ll never get his due. We’re all afraid of Bob Benson. And the firm is afraid they don’t know how to sell margarine, because even if people are buying it, no one really wants margarine. It lasts and lasts, you see. Be careful what you wish for — you’ll be stuck with that tub of margarine forever, even if it stabs you or goes to meet with Duck Phillips.

But one person was notably unafraid in “The Better Half,” and that was Betty. What does she have left to worry about? For years, she was terrified that Don was lying to her, that she’d be disgraced somehow, made to look even more foolish. She was right! He was lying, and it sucked, and they got divorced, but she didn’t lose social status. For a long time, her greatest fear was being unattractive — and then she gained a bunch of weight and felt like a hulking beast or whatever, and it turned out that Henry Francis really did still love her. It didn’t render her worthless after all. She’s afraid of aging, and yet here she is, as ogled as ever. “Can you believe I’ve had three children?” When she tells Don she’s happy in her life, she really means it. We haven’t seen Betty this self-assured since “Souvenir,”* when she’s all dolled-up in Rome. And wearing the same earrings.

Given how meticulous the costuming on this show is, that isn’t a coincidence: Those baubles mean something, damn it! We’ve seen a lot this season about repeating patterns, whether it’s the show repeating several themes from season three, or Peggy getting sucked back into Don’s orbit, or Don philandering just like he always did. Betty bringing back those earrings is her repeating her own patterns, too. Once upon a time, she met Henry Francis at a party, where he was the too-forward man hitting on her as she waited for someone else. Don used to get crazily jealous of other men, and now she has a new husband who gets similarly upset. Betty gets lost — literally, trying to find Bobby’s camp. And Don saves her. And they reminisce for a bit, and they have sex, but it doesn’t mean anything.

This time, though, Betty’s the one setting that boundary, redefining their time line. For Don, the idea of the “better half” is about another person, someone else making him work harder or seem smarter or making him feel loved and respected. Betty’s “better half” isn’t a person, it’s a era. She tells Don he’s different “before and after.” Her better half isn’t Henry — it’s whatever the second half is. Don wonders if this is how they would be if they had stayed together, with her still as his better half. Betty doesn’t think about that anymore — there was a time she did, but that was before, and this is after.

“This happened a long time ago,” she tells Don as some kind of reassurance. This isn’t part of this (good) second half, this is part of the old (bad) half, the first half. Their weird shitty kind of love did happen a long time ago, and they’re both different now, and better probably (at least Betty is), but there’s … margarine in this relationship, too, something that will last forever. (Like their kids.) “Part of you will always love your ex-wife, even though you both know you’re better off with other people!” Sorry, Fleischmans. That’s not much of a slogan.

* This post previously misidentified the title of the season three episode where Betty and Don go to Italy. 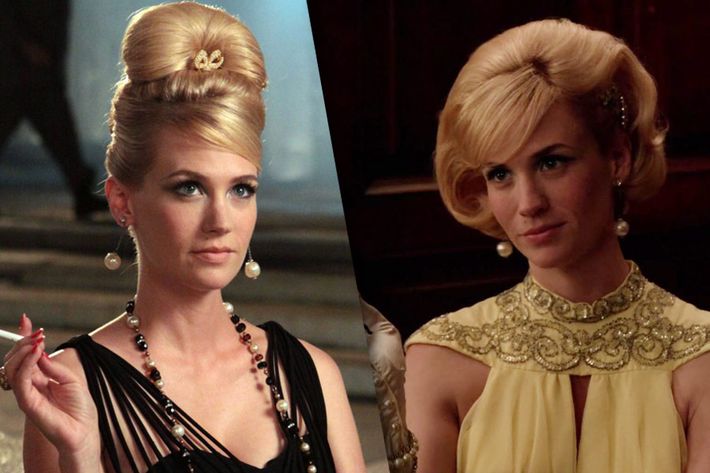