Mad Men is not a particularly religious show. There are markers for religiosity — Sylvia’s very prominent cross necklace, Rachel Menken’s frequently acknowledged Judaism — but we rarely see the characters attend any form of religious services, for example. There’s not a lot of God chitchat, which is why a catechism reference on last night’s episode “The Crash” really stood out. With everyone in a ridiculous drugged state, Stan Rizzo pulled down a blindfold and stood against a wall as the other copywriters lined up to throw X-acto knives at him. “He’s gonna look like St. Sebastian,” said Ed Gifford. (Who we barely know. He’s the one with the glasses.) “You’re pretentious, you know that?” said his sidekick John. “I like that!”

St. Sebastian — martyr and patron saint of archers, athletes, and soldiers — may or may not be a pretentious reference. But in mid–1968, it’s a pop-culture reference. Here’s the April 1968 cover of Esquire: 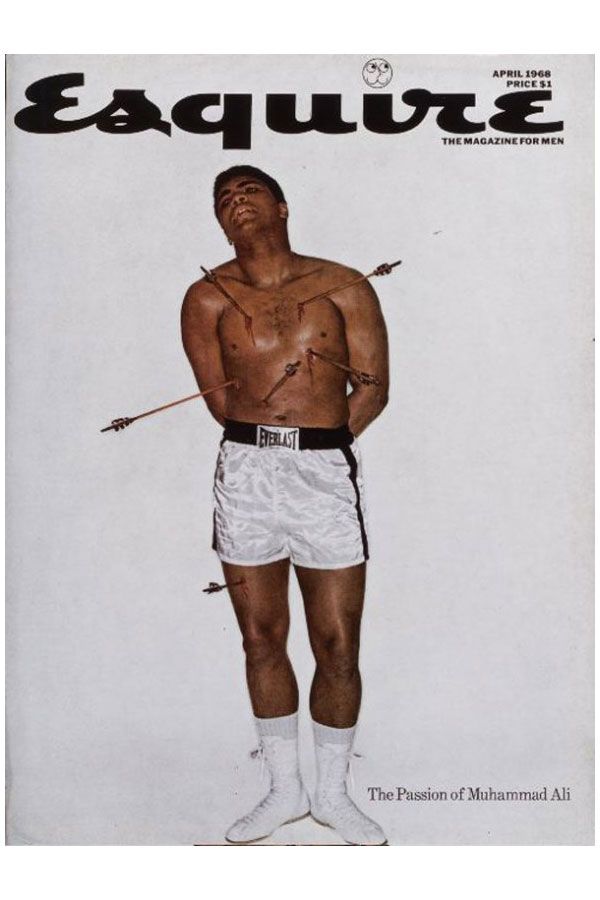 That’s Muhammad Ali as St. Sebastian in one of the most famous magazine covers of the twentieth century. It’s only a few months old for these characters, and it seems very unlikely that they wouldn’t be familiar with it. SCDP’s affection for Ali goes back to “The Suitcase,” when everyone was consumed with the Sonny Liston–Cassius Clay fight, which wound up inspiring Don’s Samsonite campaign. But the magazine story isn’t about boxing so much as it is about Muhammad Ali being arrested for draft evasion, stripped of his boxing title, and banned from the sport. Given Stan and Peggy’s opposition to the war in Vietnam, it seems like those copywriters would be aware of the world’s most famous conscientious objector. Stan’s story later in the episode, about mourning his young cousin (who Peggy met at the “Zou Bisou Bisou” party last season) who was killed in combat, makes him seem even more likely to get the reference.

So why didn’t anyone mention it? Well, they were all on drugs, for starters, except Ginsberg, and he was a little preoccupied with getting to throw a super-sharp knife at his colleague. It’s easy to get distracted.