One of the first things director Richard Linklater did with money he had saved from his movies was buy a piece of land in Bastrop, Texas. He built a baseball diamond on it and a library in which he stored his collection of movie posters, a personal ­35-mm. print of his 1996 film subUrbia, some paraphernalia from 1993’s Dazed and Confused, and writing going back 30 years, says Linklater’s frequent collaborator Ethan Hawke. When a forest fire tore through the area in 2011, it was destroyed. “Everything went up in flames,” recalls Hawke. “Thirty years of work. He lost everything. And when I called him to say how sorry I was, he was already thinking about how grateful he was for the fire for teaching him not to be materialistic. This makes him sound like Saint Rick. He’s not. He’s his own mysterious entity.”

Julie Delpy, too, reaches for metaphysical simile when explaining the levels of patience Linklater brings to the shooting of the three movies they have made together: Before Sunrise (1995), Before Sunset (2004), and now Before Midnight, each following the same couple’s relationship at nine-year intervals. “It’s an interesting process, not just psychologically but as a life experience,” says Delpy. “Rick’s very laid-back. Ethan and I are crazy and animated because we are in the moment of those characters. Rick’s ten years older. We’re, like, here trying to figure out what’s going on, and Rick has probably figured it out but he’s letting us figure it out for ourselves.” She laughs. “He feels like God sometimes.”

Ruddy of cheek, with long, floppy, brown hair and only a smattering of gray in his beard, Linklater, at 52, has the helpful glow of someone about to tune up your car engine, but with a daydreamer’s bashful, abstracted air. Most of his answers wind through some combination of “you know” or “I don’t know,” before hitting a groove on the effect of nitrous oxide on creativity (some of his best ideas have come in the dentist’s chair), or the Apollo missions, then tailing off with a shrug and a look into his lap. At one point, comparing the mind’s imaginative leaps to the way people walk on the moon, he makes a slo-mo bound with his fingers across the table—a gesture whose disarming sweetness is impossible to imagine coming from any other working film director. He and Hawke have pitched many movies to studio executives over the years, and Linklater’s pitching abilities have not improved with time.

“Rick and I would go into a meeting,” says Hawke, “trying to sell somebody on an idea for a movie, and the head of the studio would go, ‘So tell me about your film,’ and Rick would go, ‘Well, gee, I don’t know,’ and just stop there. He just doesn’t ever lie. ‘Well, you know … what I hope to do is this.’ In a world where all directors seem like salesmen trying to project themselves as some kind of visionary, you don’t get this brittle ‘Oh, I’m an artiste, my work is important’ vibe from him. You tell him his movie is important, he’ll run as fast as he can.”

Linklater may have to get used to it. The release of Before Midnight has been greeted with the sort of enthusiasm that normally precedes Oscar campaigns—the R.S.V.P.’s to the first screening were returned within hours, the publicist tells me. “That never happens.” At the risk of spoilers—the first ten minutes are close to pure bliss for fans—the film finds Celine and Jesse, the lovers of the first two films, on holiday in Greece, where they walk and talk and argue and flirt, as they have always done, the ancient backdrop only serving to underline the real subject of the films, a ménage-à-trois between the couple and a third, as-yet-unbilled character: Time. Put like that, the films’ achievement suddenly seems very grand indeed—a ringing confirmation of those critics who compared Linklater’s experiments in real-time dramaturgy to Satyajit Ray’s Apu trilogy and Truffaut’s Antoine Doinel films.

“The major, major thing that Rick was onto with these movies was: ‘We don’t need anything except what it feels like to connect with another human being,’ ” says Hawke. “ ‘What that feels like. That feels magical.’ I remember Julie saying when we made the first one, ‘I think the movie needs to be funnier, you need to write more jokes.’ And Rick said to her, ‘I’ve been working with you for nine weeks. I find you absolutely and completely intriguing, beguiling, and hypnotic. If we can get the real essence of you in front of a camera and they can’t give a shit for two hours, then I’m not interested in them as an audience.’ She was like, ‘Okay, but it’s going to be bor-ing.’ ” 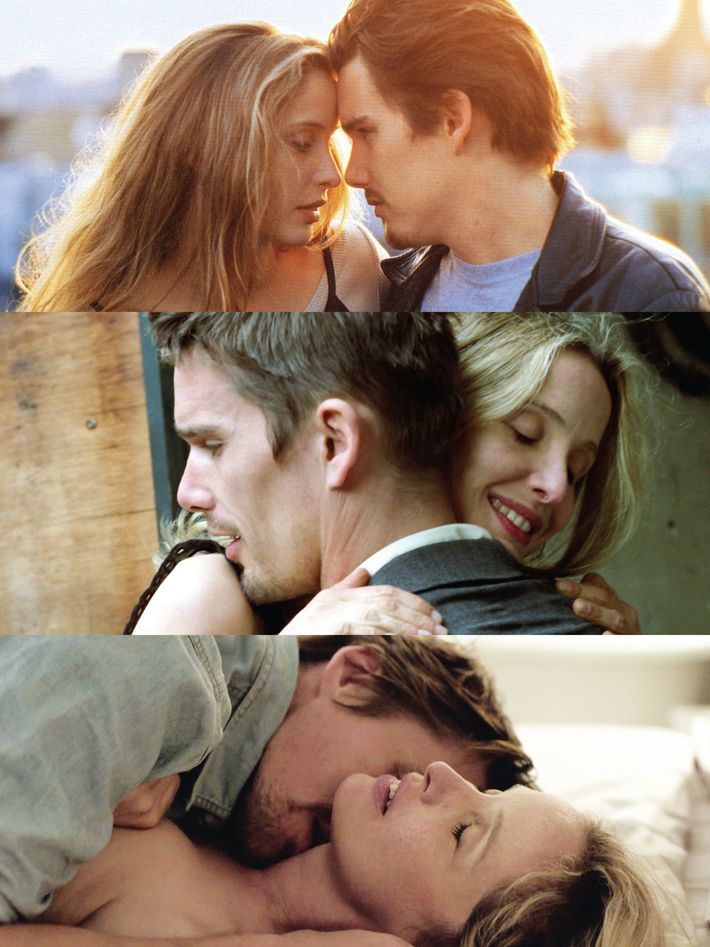 Their method with this film was the same as for the first two: hole up in a rented apartment or hotel room in a foreign city and mine the past nine years of their pooled life-streams for whatever glimmers of wisdom, humor, and romance they can spot. No ganging up against each other. “Two against one equals zero on everything,” says Linklater. All three of them must agree for something to go into the movie. “We might have twenty pages, and there’ll be three lines in the final movie out of those pages.” But they are “beyond offending each other,” says Linklater. “We have a shorthand. If you meet blank faces, it never happened; you move on to the next thing.” He adds, “This one was so much more ambitious. Harder subject matter, harder age to be sexy. We were exhausted.”

Linklater’s ambition as a filmmaker was slow to reveal itself—in that sense, he is the exact opposite of his fellow alumnus from the early-nineties indie scene, Quentin Tarantino, the tortoise to Tarantino’s hare. “He’s not forceful, but he always gets what he wants,” says Delpy. “A lot of it has to do with staying in Austin,” says Hawke. “He has never played by anybody else’s rules. So School of Rock is this huge success, and what’s the next one he does? A Scanner Darkly? After The Newton Boys was perceived as a failure, he did two movies back-to-back, Tape and Waking Life, two totally obscure art movies.”

Linklater’s career path may be erratic, but it is of a piece with a filmmaker fascinated by the meandering and discursive. Next year we may see the release of another long-gestating project. Alternately titled Boyhood and (most likely) Growing Up, it again stars Hawke, this time opposite Patricia Arquette as parents of a boy whom Link­later has filmed growing up, from the ages of 7 to 18, shooting three days each year for ten to fifteen minutes of film, editing as he goes along. The young boy he started working with, Ellar Coltrane, is now a young man. “He’s kind of like family now,” says Linklater, who has three kids of his own, including identical twins. “There are no contracts,” he explains. “You can’t even legally contract anyone for more than seven years. It’s weird that these are both coming out: two life projects to do with time.”

He pauses, looking momentarily panicked, as if I am about to start talking about his themes or oeuvre. “I’m fascinated with that relation, which we all have, with our previous selves. We all have that, that’s all we have, our whole life—who you were as a kid, who you were at 20—the great thing about getting older is you can reference yourself. But I’m equally sure that if we really could meet ourselves, we’d be surprised. Because we’ve re-characterized ourselves so many times to fit our current needs: ‘Oh, I was an idiot then, but now I’m smart.’ Not giving yourself enough credit, or giving yourself too much. It’s a fascinating relationship. That’s what these films have become about.”

*This article originally appeared in the May 20, 2013 issue of New York Magazine.

overnights 10 mins ago
Stranger Things Recap: Proof of Life The gang is having trouble adapting to their new homes.
cannes 2022 8:00 a.m.
Cronenberg’s Cannes Comeback The director’s stomach-turning new movie has him back in the festival’s good graces.
By Rachel Handler
overnights 8:00 a.m.
Stranger Things Season-Premiere Recap: Save the Cheerleader The Duffer Brothers promised a darker version of Stranger Things now that the kids are a little older and, buddies, they aren’t lying.
hello clarice 1:31 a.m.
Jodie Foster to Star in True Detective Season 4 Titled True Detective: Night Country.
theater review Yesterday at 10:17 p.m.
Fat Ham Aims to Put the Ha in Hamlet Too too solid.
tributes Yesterday at 8:46 p.m.
Lorraine Bracco, Martin Scorsese, and Others Remember Ray Liotta Liotta died at the age of 67.
memories Yesterday at 5:01 p.m.
I Sat Front Row at Maria Bamford’s Comedy-Special Experiment 2012’s The Special Special Special! remains a source of inspiration for comedians. Here’s what it was like to be there on the couch next to her.
By Wayne Federman
nihilism Yesterday at 4:50 p.m.
Does the Johnny Depp Trial Have a Point? Experts weigh in on the great nihilistic trial of 2022.
refresher course Yesterday at 4:37 p.m.
What Stranger Things Are We Afraid of, Again? As we brace for a fourth round of chaos in Hawkins, let’s review the villains, both otherworldly and human, we’ve met along the way.
obits Yesterday at 4:25 p.m.
Andy Fletcher, Depeche Mode’s Keyboard Savant, Dead at 60 The band confirmed his “untimely” passing.
extra credit Yesterday at 4:20 p.m.
Maggie Rogers’s Coachella Set Doubled as a Grad-School Project The singer-songwriter recently earned a master’s in religion and public life from Harvard.
stan culture Yesterday at 4:02 p.m.
Amber Heard Addresses Johnny Depp Stans and Social Media in New Testimony She told the jury that Depp promised her “global humiliation.”
2022 summer preview Yesterday at 3:56 p.m.
A Guide to This Summer’s Indies (Based on Genres Familiar and Not) Is “ethically dubious podcaster” a genre? Maybe it should be!
summer preview Yesterday at 3:32 p.m.
Summer TV Used to Mean Something, Damn It Once upon a time, television programming mirrored the rhythms of life. Now it’s become the calendar version of the endless scroll.
encounter Yesterday at 3:19 p.m.
Édouard Louis Wants You to Go Protest After Seeing His One-Man Show The French writer is frustrated with Americans.
don't get your pooh on shein Yesterday at 1:19 p.m.
Public-Domain Winnie the Pooh Stars in New Slasher Film It’s a rather murder-y day.
summer preview Yesterday at 1:00 p.m.
36 Albums We Can’t Wait to Hear This Summer From Lizzo to Maggie Rogers.
By Michelle Hyun Kim
summer preview Yesterday at 1:00 p.m.
44 TV Shows We Can’t Wait to See This Summer It’s blockbuster season in TV Land.
By Vulture Editors
obits Yesterday at 12:52 p.m.
Ray Liotta, Crime-Drama Boss, Dead at 67 The Goodfellas star reportedly died in his sleep.
crime Yesterday at 12:37 p.m.
Kevin Spacey Charged With 4 Sexual Assault Counts in U.K. The charges came down while he was in a New York courtroom for a separate sex-abuse case.
More Stories