This week’s “What Ryan Lochte Actually Did on What Would Ryan Lochte Do?” is a day late. Are you angry? Well, you can’t be, because I had to be an awesome American yesterday and participate in jury duty. Guess which one was worse.

* In this week’s episode, we learn there is, in fact, a girl who gets Ryan Lochte’s heart … racing. Alas, she lives in England, and with Ryan’s busy swimming schedule, their love just cannot be. But she’s coming to visit, and Ryan has some Very Special Plans: sushi.

* When she arrives, she’s refreshingly normal-looking. Maybe Ryan will forgo his normal sushi strat and cook up some homemade cuisine? Only time will tell.

* Meanwhile, this Jaimee does indeed “exist,” as Ryan claimed (Who said she didn’t? M. Night Shyamalan?), and she thinks Ryan lives in a bachelor pad. “What else do you really need?” he counters, as a helpful infographic pops up to illustrate the Lochte essentials: couch, TV, a ‘fridgerator that’s full, and *wink* a bed. 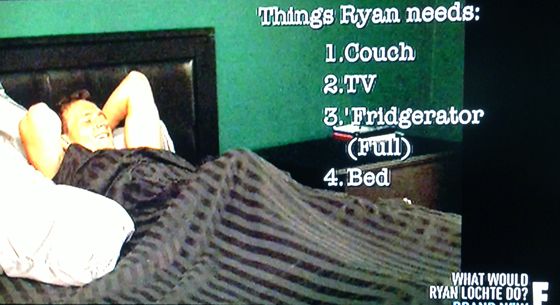 * This Jaimee, though, she’s got him even more dopey than his normal demeanor — which is apparently possible. It’s borderline adorable, if not for the sideline prodding from E!’s producers asking if they “had sex.” Ryan, like a true reality TV star, answers: “Who has sex and doesn’t have a smile afterwards?” Ryan!

* Even though Jamiee’s there, Ryan still runs through his typical workout routine — which is, can I mention, super-boring TV not helped by the fact that he KEEPS HIS SHIRT ON. Shirt off should be rule No. 1 for this entire television show.

* Before heading to Orlando for his race, he takes Jaimee out … for sushi. Ryan, noooooooooooooooooo. Their table talk is even more illuminating: “How much do you have to shave?” she inquires. “Everything.” *wink* 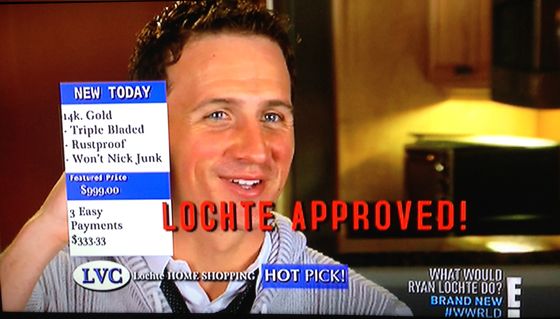 * Remember how exciting it was to watch Ryan Lochte swim during the Olympics? Yeah, this is not that. After signing autographs (“The craziest thing I’ve ever been asked to sign? … A French fry”), he proceeds to come in first place. Then? Fifth. More important, however, he wore his favorite shoes: 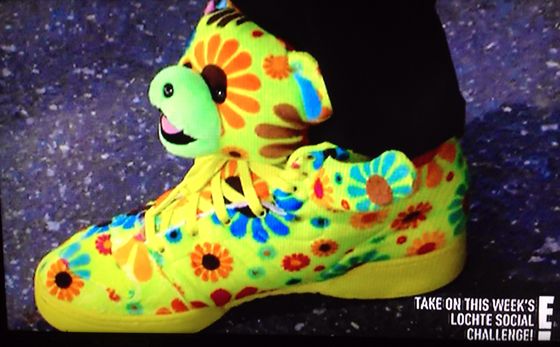 * Before Jaimee heads back to England or whatever, they decide to swim with dolphins. 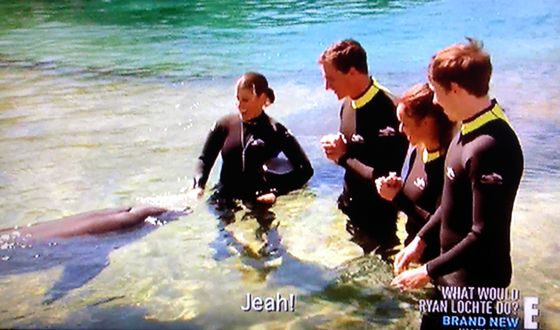 +Comments Leave a Comment
What Lochte Did on What Would Ryan Lochte Do?

now streaming 14 mins ago
The 40 Best Horror Movies on Amazon Prime Hereditary, The Village, I Know What You Did Last Summer, and more.
casting 7:27 p.m.
Mads Mikkelsen Will Replace Johnny Depp as Grindelwald in Fantastic Beasts Avada Kedavra, Johnny Depp.
gobble gobble 6:50 p.m.
What to See, Watch, and Stream This Thanksgiving With the family or at home.
By Gabrielle Sanchez
movie review 6:38 p.m.
It’s the Uncozy Parts of Happiest Season That Make It Interesting The Kristen Stewart-Mackenzie Davis Christmas rom-com is at its best when it acknowledges the cruelty underscoring its holiday hijinks.
By Alison Willmore
now streaming 5:00 p.m.
The 30 Best Movies for Kids on Netflix Spider-Man, Ralph Breaks the Internet, Casper, and more.
how-to 4:55 p.m.
Circle Jerk’s Recipe for a Viral Theater Hit “If it gets screwed up, that’s part of the energy.”
grammys 2021 4:51 p.m.
Justin Bieber Would Like the Grammys to Recognize Him As an R&B Artist The Recording Academy’s interim president responded to Bieber’s criticisms in an interview.
overnights 4:29 p.m.
The Real Housewives of Salt Lake City Recap: Take Me To Church We finally get some more intel on that whole grandpa-husband situation thanks to Meredith, who apparently loves mess even more than we do
acting 3:24 p.m.
Mary Steenburgen’s iPad Is the Real Star of Happiest Season It’s the one element of this film that is absolutely, unimpeachably perfect.
trailer mix 3:16 p.m.
House of Ho Trailer: There’s Some Hos in This House HBO Max documents the crazy rich life of a Vietnamese American family in Houston.
vulture lists 3:00 p.m.
A Definitive Ranking of Friends Thanksgiving Episodes Missing toes, Brad Pitt, and Chandler in a box.
one grand books 2:39 p.m.
Lily Cole’s 10 Favorite Books Music for Chameleons, A Room of One’s Own, The Gift, and more.
By Lily Cole
vulture recommends 2:30 p.m.
The Films to Be Buried With Podcast Will Make You Think About Your Whole Life Hosted by Ted Lasso’s Brett Goldstein, the show provides a personal look into the lives of its guests.
fa la la la what 2:21 p.m.
Oh No, There Are 82 New Christmas Movies This Year Your definitive guide to 2020’s absolute deluge of made-for-TV holiday fare, on Netflix, Hallmark, Lifetime, and more.
By Rebecca Alter
windsor woes 2:19 p.m.
The Crown Found Its Scoundrel in Charles If the Netflix series once wanted us to see the prince as a sensitive man dragged along by an unfeeling system, it certainly doesn’t anymore.
vulture recommends 2:00 p.m.
The 59 Best Movies to Watch With Your Parents During Quarantine For anyone who’s riding out the coronavirus at their childhood home.
By Nate Jones
snl 1:55 p.m.
SNL Taps Timothée Chalamet, Jason Bateman, and Kristen Wiig to Host And Morgan Wallen is getting a second chance as musical guest.
overnights 1:44 p.m.
The Bachelorette Recap: Listen to Your Heart When it comes to the Bachelor Universe, the answer to the question “Has anyone involved in this program learned anything?” is always no.
teasers 1:24 p.m.
The New Clifford the Big Red Dog Is Terrifying Who’s a big, monstrous boy?
start here 1:01 p.m.
Want to Try Time Crisis? Start Here. Highlighting the best episode of Ezra Koenig and Jake Longstreth’s Apple Music radio show.
More Stories