At midnight, Adult Swim premieres Adam Scott’s second The Greatest Event in Television History special, in which he and Amy Poehler faithfully re-enact the opening credits from the gooey 1979-84 Aaron Spelling series Hart to Hart. Of course, you already knew that and have been counting down the days until the Parks and Recreation couple drop through his-and-hers trap doors. But it bears asking: How, logically, can there be two specials named The Greatest Event in Television History, a title also given to last fall’s edition, in which Scott and Jon Hamm re-enacted the opening credits of the 1980s series Simon & Simon? And for that matter, can either of them truly trump other hugely impactful TV moments, such as the Beatles’ first-ever appearance on The Ed Sullivan Show or The Sopranos finale (which by now we all agree was 100 percent brilliant, right?)?

To place Scott’s latest superlative Adult Swim special in its proper context, Vulture sought out the man himself and challenged him to explain why his new show is bigger than some of the biggest moments in television history. He eagerly obliged, despite being in the throes of filming another high-value sequel project— Hot Tub Time Machine 2 (“I’m so glad I’m able to get in a word with you now before we go to Cannes and do the sort of worldwide Oscar tour with this movie,” he said).

This year’s Greatest Event in Television History vs. last year’s Greatest Event in Television History
“What can I say? We were wrong. It wasn’t the greatest event in television history. But I’d rather be wrong for eight months than correct for ten seconds if it means we end up being correct again at some point. Which is why I have that phrase tattooed on my neck.”

The Greatest Event in Television History vs. the Apollo 11 moon landing
“Since the ‘moon landing’ was clearly fake, and what we’re doing is almost too real, I’m not even going to dignify this with an answer.”

… vs. The Sopranos finale
“Funny you should mention this. We are considering making a shot for shot recreation of the last scene from The Sopranos from the perspective of the onion rings, because that’s what everyone had questions about. Hopefully we’ll be able to provide some answers for people.”

… vs. the Ellen-comes-out episode of Ellen
“I’m not sure what this is, but it sounds very self-referential. I like it.”

… vs. Oprah’s interview with Tom Cruise
“I’m not sure what you’re accusing me of, but no couches were harmed during the filming of our show.”

… vs. The Star Wars Holiday Special
“There are parallels because I have a strong hunch Amy Poehler and I may one day be deeply embarrassed about what we’ve done here.”

… vs. Game of Thrones’ Red Wedding scene
Okay, Scott was happy to play along and make with the jokes for a while, but this was no laughing matter to him. “Nothing can or ever will approach the significance of the Red Wedding. Don’t even fuck around about this.” 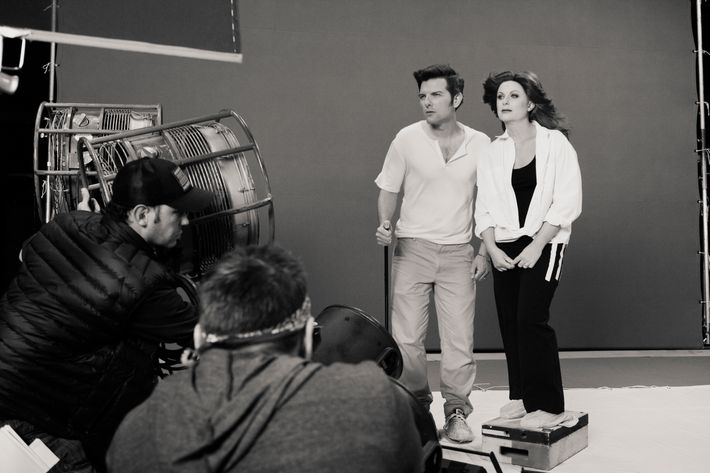