In movies like Independence Day, The Day After Tomorrow, and 2012, director Roland Emmerich delivered galvanizing pop spectacles tailor-made for the final moments of a trailer. Still, we couldn’t help but wonder which of those memorable sequences might rank among his own favorites. So while Emmerich is touting his new film, White House Down — an action flick starring Channing Tatum as a Secret Service hopeful who must protect Jamie Foxx’s president from terrorists — we asked the director to pick the five scenes from his career that he’s proudest of. Are your own favorites among them?

Independence Day: The World Is Covered in Shadow
Emmerich’s 1996 action movie is jam-packed with memorable images of destruction — including the iconic image of the White House getting blown to smithereens by alien invaders — but the director’s favorite scene in the movie precedes all the mayhem: It’s the sequence where gigantic UFOs first make their presence known by blanketing the world’s major cities in darkness. “It’s happened to me with every film that a couple of images pop into my head and make me think, I have to do this, and this is one of the first,” said Emmerich. “I just imagined spaceships so big that they could create shadows over whole cities. You almost don’t need to see the object itself: The shadow creates more of an impression.”

Emmerich admitted that those iconic shots will be hard to match in the Independence Day sequel he’s currently developing, but hopes that special effects technology will help give him a leg up. “The interesting thing is that when we did the first Independence Day, we had to work with models; there was not much done in the computer besides compositing,” he said. “At that time, I actually felt very restricted, because I had all these images in my head and we couldn’t produce them. That’s actually why I decided to finally do a sequel, because after I made 2012 — a movie with all these digital environments — I realized I could make a sequel that actually can realize what’s in my head.” Besides, said Emmerich, “Every other superhero movie these days has an alien invasion, so I thought, I think it’s time for me to do an alien invasion movie again!”

White House Down: A Fight in the Kitchen
Perhaps the most crowd-pleasing set piece in White House Down, this battle in the White House kitchen follows Jamie Foxx’s nerdy president as he trades his dress shoes for sneakers, fends off a henchman, and comes to Channing Tatum’s rescue. “It was the first big action sequence we shot with these two guys, and it turned out to be really good,” said Emmerich. “The kitchen was beautiful, the light was beautiful, and then we came into this beautiful environment” — he laughed — “and shot it to pieces.”

Emmerich confessed that a big chunk of this sequence was improvised on the shoot day, which is a common practice on his movies. “That moment where the president grabs the gun and kicks the bad guy in the face, that wasn’t in the script. He was supposed to come into the scene with a gun, but I thought, Wait, where would he get this gun from?” Foxx himself came up with the line “Keep your hands off my Jordans,” and while the actor worried afterwards that it might be too corny, Emmerich left it in. After all, this was a different, dorkier Foxx than what we’re used to: Though we know that Foxx can play the action hero, here he had to stay in character as a nerdy politician who’s uneasy around firearms. “I kept reminding him of that!” laughed Emmerich. “That’s why I gave him glasses.”

2012: A Wave Goes Over the Himalayas
Emmerich’s got a well-earned reputation as a cinematic master of disaster, and in 2012, he brought those talents to bear, decimating the earth many times over with quakes, floods, and volcanic eruptions. Of those sequences, Emmerich’s favorite is the wordless scene where the Himalayas are hit by a megatsunami. “This was a little bit like the shadows from Independence Day, because it was the first image I had of the movie,” said Emmerich. “I remember when I told my co-writer Harald Kloser, ‘I think I have an idea for a movie. Imagine it: A little monk is standing in his monastery, and all of a sudden, a huge wave comes over the Himalayas.’ It’s just a stunning image that became one of the most iconic images of this movie.”

Though water sequences are notoriously difficult for special-effects teams to render, Emmerich said that we’ve come a long way in a short time. “It’s all these things now that you couldn’t do ten years ago,” he said. “The seminal movie here was The Perfect Storm, which had the first computer-generated water sequences that were impressive. Now we’re in a state where you can pretty much do anything you can imagine.”

Anonymous: The Prologue From Henry V
For Emmerich’s controversial take on the murky origins of Shakespeare, the director drafted Tony-winning actor Mark Rylance to deliver the prologue from the bard’s Henry V, a bit of text that implores the members of the audience to use their imaginations for a play staged without scenery. (Fitting subject matter for a director who’s coaxed his actors through plenty of green-screened action sequences.) “We had built this beautiful theater, and at one point, the Steadicam operator came to me and said, ‘Roland, I want to be with Mark Rylance on the stage,’” recalled Emmerich. “We had already shot everything at every angle, but he said, ‘Let me try something,’ and it was a magical moment: He walked with his Steadicam around Mark Rylance, who was undeterred, and they made magic together. So much of that one shot is in the film.”

There was just one hitch: “Mark Rylance is one of the best theater actors in the world, but the audience was totally German. They didn’t understand a word! And when I told Mark that they wouldn’t understand him, he instinctively played the whole scene more with his body … and the audience laughed at all the right times. It was one of those moments that reminds you why you make movies.” 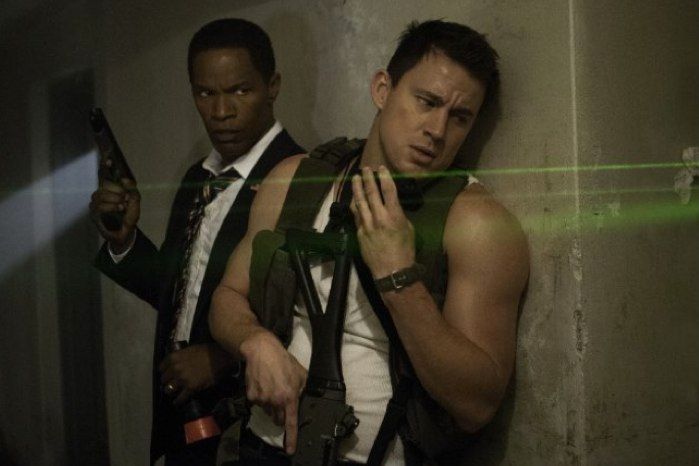 White House Down: Two Fathers
Well into White House Down, Tatum and Foxx pause to regroup, tending their wounds and discussing their daughters. “That’s my favorite scene in the film,” said Emmerich, explaining, “These are called ‘campfire scenes.’ They’re like something out of a western, where before the big showdown, there’s this moment of reflection. These campfire scenes are so important in a movie, and you know what? They don’t make them anymore.”

Emmerich cast Tatum in his film just a few months before the release of Magic Mike, and he was delighted to see Tatum skyrocket in fame last summer. “He became the Sexiest Man Alive while shooting, and he was mercilessly teased by us,” laughed Emmerich. “Every morning, I’d say through a megaphone, ‘The Sexiest Man Alive has entered the premises!’”

Still, the director says there’s more to his lead than just a handsome face: “He’s so smart, and so earnest, and so willing to go the next step. He reminded me of Heath Ledger that way: At the beginning of Heath’s career, he was good-looking and charming, but nobody really knew what he was capable of, and then he became this amazing actor. When I shot The Patriot, he would always ask for another take, and when I shot a scene with him and Mel Gibson, he would always want to redo his close-up. That’s the kind of actor I like. They really take their stuff seriously.”

a long talk 22 mins ago
TDE President Punch: ‘I Understand the Backlash’ Though he’d still like to correct the record on those long-awaited albums from SZA, ScHoolboy Q, and Jay Rock.
overnights Yesterday at 11:01 p.m.
P-Valley Recap: Welcome to the Stage Ms. Tina Snow Megan’s Tina Snow fits right in at the Pynk as her character takes the stage with Lil Murda during the re-re-re-opening of the club.
overnights Yesterday at 10:00 p.m.
Westworld Recap: Murder Me a Little All of the characters are in the same time and place! What a concept!
overnights Yesterday at 9:00 p.m.
Becoming Elizabeth Season-Finale Recap: The King Is (Almost) Dead Mary is so close to the throne. And yet …
overnights Yesterday at 9:00 p.m.
The Real Housewives of Atlanta Recap: Mrs. Worldwide Welcome to the party, Ms. Burruss!
jinkies Yesterday at 8:03 p.m.
Scoob! Holiday Haunt Filmmakers Recorded the Score for Their Canceled Movie Hey, if the musicians were already paid for …
utopia Yesterday at 6:25 p.m.
A Timeline of Travis Scott’s Post-Astroworld Public Return He will perform a Las Vegas nightclub residency, “Road to Utopia,” beginning in September.
you know nothing Yesterday at 6:11 p.m.
Everything We Know About the Game of Thrones Prequel House of the Dragon So Far The official trailer for the long-awaited HBO prequel is here.
callouts Yesterday at 3:09 p.m.
Mike Tyson Says Hulu Is the ‘Streaming Version of the Slave Master’ He claims that the streamer’s series Mike stole his life story and did not pay him.
overnights Yesterday at 3:07 p.m.
Love Island Recap: That’s My Boy Ekin-Su urges Danica to tell off Billy, a true chaotic evil.
in your area Yesterday at 1:28 p.m.
Blackpink Celebrates 6th Anniversary by Finally Dropping a Comeback Date Sink your teeth into “Pink Venom” on August 19.
family business Yesterday at 12:20 p.m.
Fidel Castro’s Daughter Approves of James Franco Playing Her Dad In Alina of Cuba, the biopic based on her life.
overnights Yesterday at 11:35 a.m.
Evil Recap: State of Grace Talk about paying through the nose.
accidents Yesterday at 12:24 a.m.
Anne Heche in Stable Condition Following Car Crash Heche reportedly crashed her car into a Los Angeles home.
hot dogtorate Aug. 6, 2022
That’s Doctor Michelle Yeoh to You Michelle Yeoh will receive a doctorate of fine arts from the American Film Institute.
overnights Aug. 6, 2022
The Sandman Recap: A Death in the Family It takes a visit with Death for Dream to learn how to live más.
overnights Aug. 6, 2022
RuPaul’s Drag Race Down Under Recap: Not So Groovy One of the show’s most delicious elimination narratives in recent memory.
remix city Aug. 6, 2022
Beyoncé Drops New ‘Break My Soul’ Remix With Madonna It’s time to vogue!
overnights Aug. 6, 2022
The Sandman Recap: Darker and Edgier Dream finally learns that tools can be traps.
overnights Aug. 6, 2022
The Sandman Recap: Go to Hell The Sandman goes to a hot place where Dream and Lucifer have a rap battle.
More Stories