Sunday’s Mad Men finale introduced as many riddles as it solved, but one question remained as vexing as ever as we exited the show’s penultimate season: How does the young Dick Whitman grow up to look like Don Draper when he gets older? Brandon Killham, the 15-year-old actor who portrays the whorehouse-living little Dickie, is no dead ringer for Jon Hamm, after all. It makes you wonder if Mad Men will wrap things up next year by revealing yet another shocking detail lurking in Don’s past: plastic surgery.

Of course, Killham’s dissimilar appearance is partially affected by the Moe-from–The Three Stooges haircut and doofy outfits he’s made to wear, but he nonetheless serves as an occasional reminder of the hazards of kid casting on television. [Note: The images used here come from the excellent (and procrastination-enabling) Kid Casting Tumblr.] Choosing the right actor to portray the younger version of a beloved character can make or break a flashback scene meant to reveal pertinent insight; unfortunately, not many shows are able to emulate 30 Rock’s savvy decision to cast Tina Fey’s daughter as the young Liz Lemon. But which shows have kid casting down to a science? Vulture asked Emmanuel Craciunescu, co-owner of PhoJoe Photo Manipulations, which specializes in age-progression photo manipulation often used by law-enforcement agencies and Nancy Grace, as well as Alexandra Brown and Ron Etsey, the team behind the digital face-aging software AprilAge, to examine screengrabs of the young and old versions of Don Draper, Jeff Winger, Leslie Knope, and others. 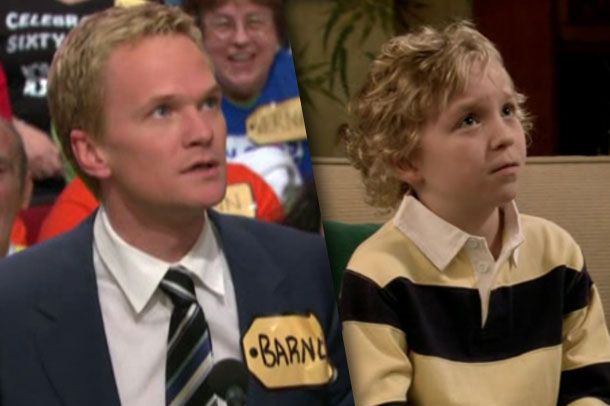 Barney Stinson (How I Met Your Mother)

Ron: Because the actor is so young, it’s hard to tell.

Alexandra: I have a problem with the eyes right off the bat. But apart from that, which are incredibly important, I like this one. Look at the shape of the face. Look at the ears! Although they could have done that with prosthetics …

Emmanuel: The eyes and eyebrows are a really good match. The expressions are also similar. The face shape is not really the same, but overall, it’s a pretty good match. 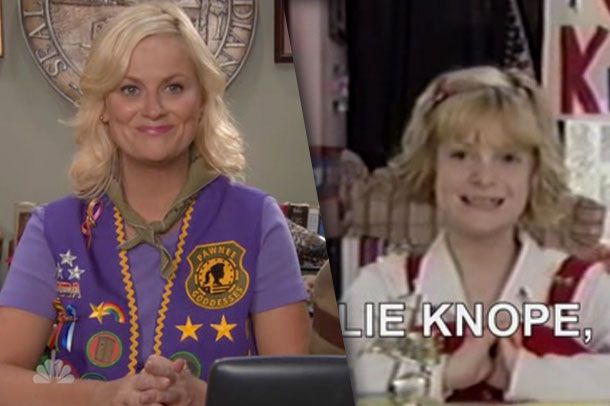 Ron: Look at the square jaw.

Emmanuel: The face shape is a good match. Their smiles are also similar.

Alexandra: I just laugh looking at … what’s her real name, is that Amy Poehler? I just laugh looking at her. They’ve done well characterizing the little kid. That square jaw is fantastic. The eyes aren’t the same, so there’s a little bit of an issue. The nose isn’t bad. That one, to me, in terms of the character being portrayed is fantastic, so it’s not as much of “Did this kid grow up to be Amy?” It’s more, “Wow, this little actress has just done so well.” Whoever set-designed this and did the rest of it, they have done a really good job. Does she look like [Amy Poehler]? To me, not so much. But the rest of it is wonderful. 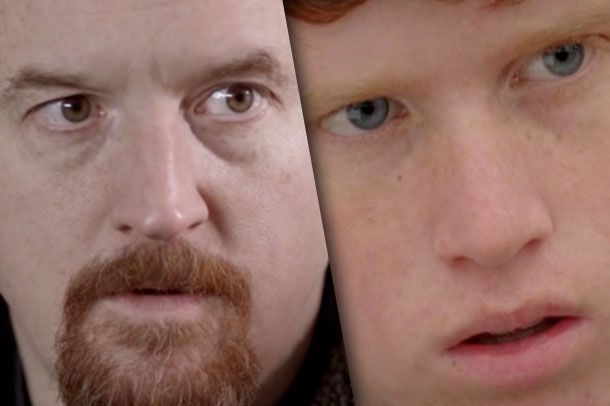 Alexandra: At first I thought it was the same person. I was looking at it and I thought, Why are the eyes different colors? I thought maybe they had lenses in. And then I realized, No, it’s a different person.

Emmanuel: The eye color obviously does not match, and the eyebrows do not match. The nose and mouth have some resemblance, but overall, not a great match. 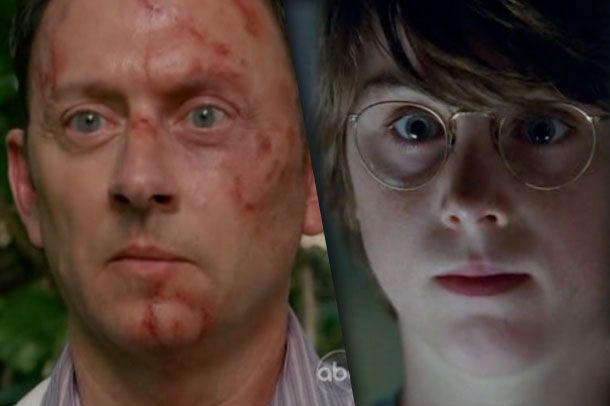 Alexandra: Look at the kid’s eyes! They’ve done well there. We’re liking this one.

Ron: Ben is perfect! The nose shape is the same. The folds under the nose — that may be prosthetics.

Emmanuel: The nose and mouth match up pretty good, but overall, the facial essence is not believable. 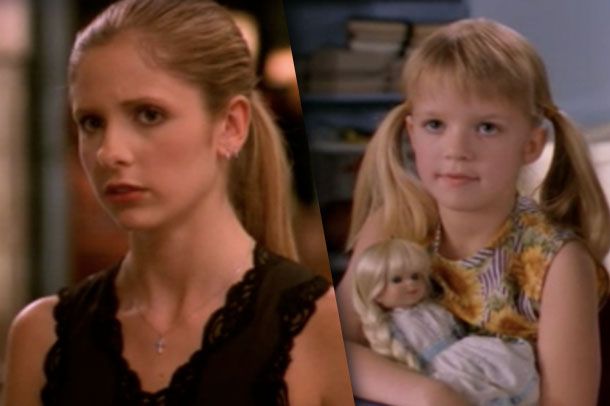 Ron: I think what we’ve seen is, when you’re casting kids who are 7, 8, or 9, the cranium formation through their teen years from child to adult, although it’s predictable, there’s substantial change there. If what you’re trying to do is match the twentysomething adult with a 7- or 8-year-old, there’s more latitude there, because all the skull formation hasn’t happened yet. When you [try to match] a 20-year-old to a 60-year-old, you’re dealing strictly with soft tissue, and it’s much more of a prosthetic exercise. 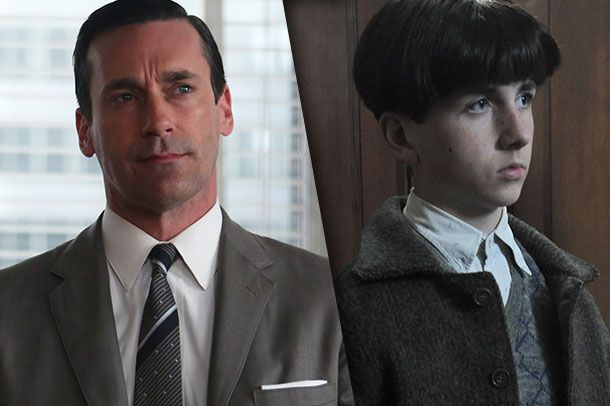 Emmanuel: It’s hard to tell from the angle of the boy, but it looks as though the eyes match somewhat. But not so much the facial shape.

Alexandra: That poor kid with that hairdo! That’s just mean! That hair is just so horrendous, and Jon Hamm’s hair — he’s so good-looking and he’s so styled! They made the little kid such a geeky little hairdo that no wonder people are saying it’s the worst casting ever. That hair would throw anybody off. It’s not the face; it’s what they’ve done with the hair.

Ron: You know, it doesn’t look that bad. You look at him as a 12-year-old and a 45-year-old, and the skin tones are similar, as are all the things that you’d determine would be the same person. The first time I looked at it, I had to do a double-take to see whether, in fact, it was just a younger photo of the same actor. My sense is that it’s a pretty good likeness. 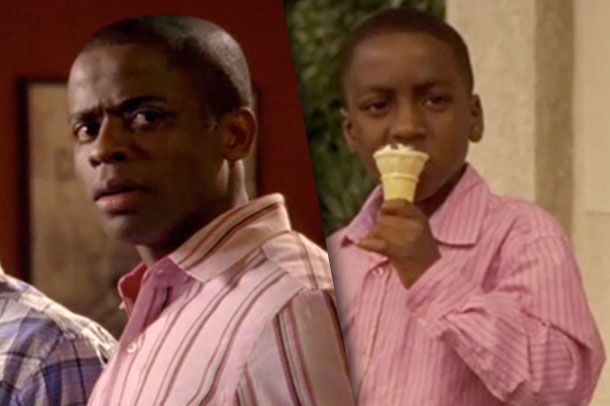 Emmanuel: The eyes and eyebrows are pretty similar. The facial shape is pretty good. Not a match! 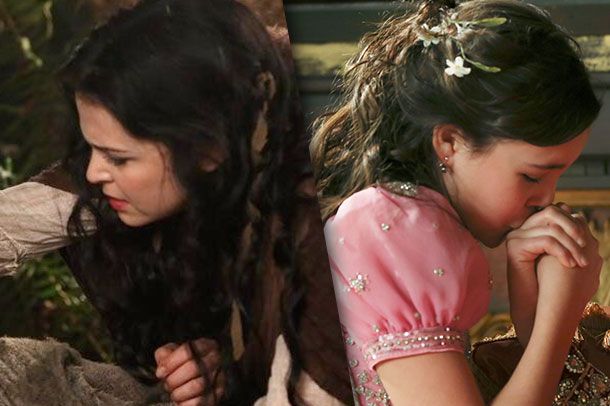 Snow White (Once Upon a Time)

Alexandra: She is so made up, it’s hard to tell. They have a lot to play with here because of the costumes. But I think this one’s pretty good as well. The face shape — that’s great. 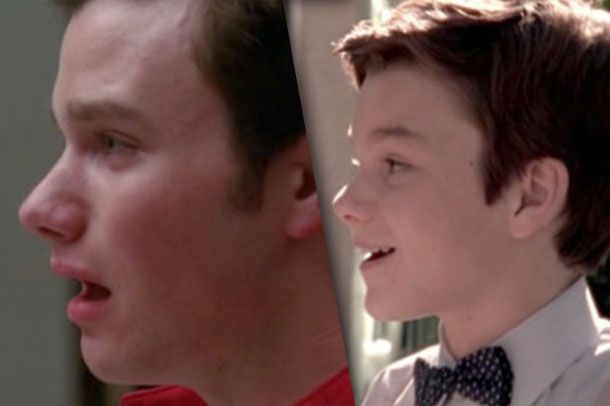 Emmanuel: This one is almost spot-on. The eyes, nose, and eyebrows are all very similar.

Ron: It’s as much makeup and hair as it is the actor.

Alexandra: Seeing what they’ve done with the hair is pretty good; they’ve styled the young actor. The older guy has lighter eyes, but from a style perspective, they’ve made the same person. It’s much easier to make the mental leap. The kid has a little bit more of a pronounced chin — and look at his nose! — but they’ve done pretty well.

Emmanuel: This one doesn’t really match up other than the facial expressions.

Ron: It’s really interesting, because we do some work with the National Center for Missing and Exploited Children. Primarily what they do are the drawings of missing children which are generally seen. We talked to them, and they’re not really trying to match what the person will look like. If they have a boy who went missing when he was 8, and now he’s 20 and they’re trying to find him, they’re not trying to create an image that looks like him now. What they’re trying to do is to get close enough, but also broad enough, in terms of what he might look like, so that somebody somewhere will say, “You know that guy in the next block? He kinda looks like the guy in the image.” If you get too specific, you lose the ability to say, “Could be, but who knows?” I think the director here is working the same way: He’s trying to get in a range where he can sell the individual not necessarily by facial image, but by getting close enough that the other stuff lends it that credibility.

Alexandra: Yeah, I could believe this one because of what’s being acted. You know what I’ve realized in this exercise? All the other stuff that goes into casting someone besides facial resemblance is so critical.

The Many Faces of Mad Men’s Ted Chaough

+Comments Leave a Comment
Kid Casting: Which TV Show Does It Best?