Last night’s Mad Men showed that tensions are still running high at Sterling Cooper and Partners, but you wouldn’t know it by the sight of that cool new logo of theirs. Well, AMC sent out the firm’s official press release about its new name and look, written by Peggy Olson herself. Included are quotes from some of the partners, including Jim Cutler, who thinks the “ampersand is funky.” Read it below, before the company changes to Draper Benson and Associates. 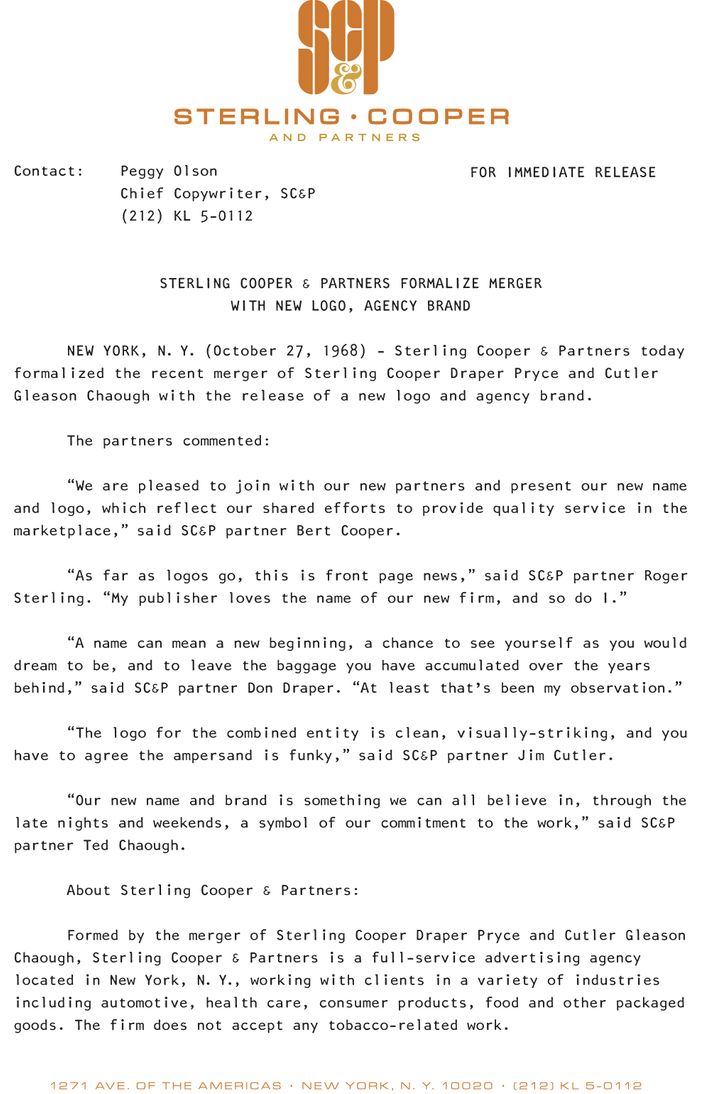 ceramics in the mix 8:00 a.m.
The Cutting-Edge Ceramics at the Exhibition ‘Clay-Pop’ Alia Williams curated the playful show at Jeffrey Deitch gallery.
last night on late night 12:28 a.m.
Meghan McCain is Still Using her Stylist from The View She says she was bullied off the show, but not away from its hair and makeup team.
dunes Yesterday at 10:55 p.m.
Dune Is Coming to HBO Max a Day Early It’ll appear on the streamer Thursday, October 21 at 6pm EST.
overnights Yesterday at 9:30 p.m.
The Challenge: Spies, Lies & Allies Recap: Better Off Ed The Challenge is in a very delicate place.
overnights Yesterday at 9:00 p.m.
Survivor Recap: I Am Here to Make Friends Occasionally, when a player is just so good — or perceived to be that way — Survivor can’t help but become a one-person show.
solidarity forever Yesterday at 8:55 p.m.
IATSE and AMPTP Reach a Deal, Which Members May Still Reject Monday’s strike has been averted, but the dust has yet to settle.
obits Yesterday at 8:02 p.m.
Ralph Carmichael, Composer for The Blob, Dead at 94 Carmichael wrote the themes to The Blob and My Mother the Car, as well as being the Father of Contemporary Christian Music.
penn b Yesterday at 7:30 p.m.
Cardi B And Penn Badgley Fangirl Over Each Other On Twitter Cardi B and Penny B collab coming soon!
chat room Yesterday at 6:22 p.m.
You’s Shalita Grant Is Happy to Be Hated What makes Madre Linda momfluencer extraordinaire Sherry tick? You’s season-three standout addition breaks it down.
vulture lists Yesterday at 5:30 p.m.
Every Matt Damon Movie, Ranked For nearly three decades, moviegoers have been rooting for Matt Damon. We take a closer look at the actor’s career.
allegations Yesterday at 5:26 p.m.
Ruby Rose Alleges Dangerous Conditions, Injuries, ‘Bullying’ on Batwoman Set Warner Bros. TV calls Rose’s allegations “revisionist history” in a new statement.
streamliner Yesterday at 4:53 p.m.
Amazon’s Passing Out Old Fire TV Stuff at 30 Percent Off Out with the old, in with the 4K.
rebecca is a food critic now Yesterday at 4:43 p.m.
I Can Confirm Megan Thee Stallion’s Popeyes Hottie Sauce Is Elite Brand Synergy Attention all hotties.
By Rebecca Alter
protests Yesterday at 3:30 p.m.
Everything We Know About the Netflix Employee Walkout “This isn’t cancel culture but an avoidance of accountability,” an organizer said at the event.
bird comedy Yesterday at 3:19 p.m.
Rhys Darby Just Made the Weirdest Trailer for a Comedy Special You’ll Ever See CAW!
the law Yesterday at 3:14 p.m.
Dr. Dre’s Messy Divorce Followed Him to His Grandma’s Grave Messy, messy, messy.
my single is dropping Yesterday at 3:00 p.m.
Lana Del Rey Paints Banisters Blue in Her ‘Blue Banisters’ Video Stay for her riding a John Deere tractor.
album review Yesterday at 2:41 p.m.
Young Thug’s Punk Rebirth Isn’t Quite That Neither was Lil Wayne’s.
By Craig Jenkins
vulture lists Yesterday at 2:14 p.m.
8 Travel-Horror Movies That Will Make You Want to Stay Home Maybe cancel that leaf-peeping trip.
podcasts Yesterday at 2:07 p.m.
Only Murders in the Building and Twee-Crime Podcasting The Hulu comedy presents a fascinating vision of true crime. It’s also vaguely distressing.
More Stories