As with most Shakespeare plays, there are many adaptations of the O.G. rom-com Much Ado About Nothing. The BBC did two versions, one starring Damien Lewis as Benedick; there’s a Berlioz opera and World war II–era musical (plus an in-the-works rock version by Billie Joe Armstrong); and then there are the films. Joss Whedon’s Much Ado About Nothing — a modern-day version, set in Southern California, with the men in business suits instead of combat gear — currently has a 78 percent rating on Rotten Tomatoes. New York’s David Edelstein called it “the smoothest and most enjoyable of all Shakespeare comedies on film.” It is totally worth your time! So, in its own way, is the 1993 Kenneth Branagh–directed, entirely cheeseball Much Ado. Remember this movie? It is a wonder.

First, there is the cast: Denzel Washington, Keanu Reeves, an entirely unrecognizable Kate Beckinsale — and that’s before you get to Branagh and his then-wife Emma Thompson as Benedick and Beatrice. How often do you see a good screen performance from a real-life couple? Never; it’s a sea of Giglis out there. But Branagh and Thompson nail this, to the point that you could believe their whole marriage was conducted in Elizabethan English (which seems like a decent possibility, now that I think about it). They’re hamming it up, sure, but in a classically-trained-actor way. You feel like you’re getting proper Shakespeare here.

Which brings us to another important point: this is the perfect term-paper movie. I don’t mean that in the slacker, don’t-read-the-book way; I mean that it very capably brings the traditional interpretation of Much Ado About Nothing to life. When you’re in tenth grade and just trying to figure out which lines are the plot points before your final exam, this is important. And it helps as a Whedon or a BBC viewer, too; you have to understand the straight-forward version before you can appreciate the present-day reimagining.

There are also simpler pleasures  — like, say, the picture-perfect opening credits. The whole movie has a luxurious bordering on GOOP-ish Italian vibe — it’s like watching a Merchant Ivory film, but with nudity and jokes — but this sequence is really something. Watch:

That was actually filmed after Three Amigos. Perfect.

Also on the Ridiculous List: Keanu Reeves, who uses only one expression for the entirety of the movie. Since he playing the villain, it is a scowl. Since it is Keanu Reeves, his scowl looks really confused, like this: 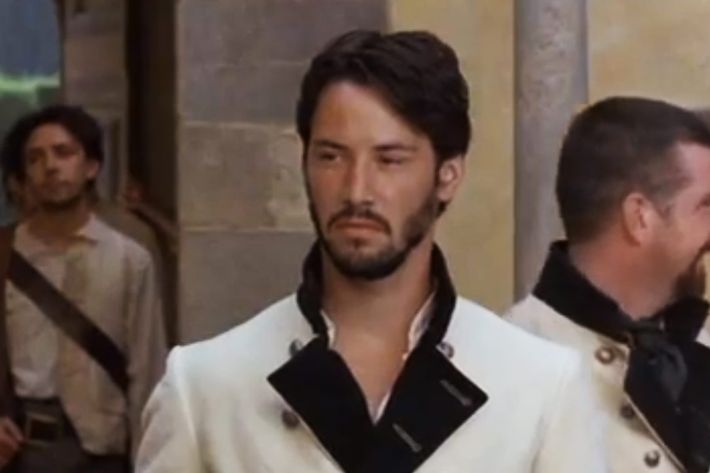 And then there is the matter of Robert Sean Leonard, who is looking great in that waistcoat. Same goes for Denzel, who, like always, is just wandering around a movie set being Denzel, regardless of time or situation. Did we mention that Michael Keaton is in this one? Seriously, see the Joss Whedon Much Ado, but rewatch this one too. 1993 was a magical time.

+Comments Leave a Comment
Remembering the Other Great Much Ado Movie

making amends 28 mins ago
Amber Rose on Kim Kardashian: ‘Kim Nor Her Sisters Deserved That’ Amber Rose expresses regret over tweets she made insulting the Kardashian family.
small stories 1:30 p.m.
Snowplow Man, ‘La Campanella,’ and 7 Other Stories About Making Station Eleven On making a show about a pandemic during a pandemic, caring about each detail, and bringing your tooth to set when the showrunner asks.
the amazing liar-man 1:00 p.m.
Andrew Garfield Didn’t Tell His Shot of Espresso About Spider-Man: No Way Home What else is a lie, Andrew? Are you even British?
feature 12:30 p.m.
The Undoing of Joss Whedon The Buffy creator, once an icon of Hollywood feminism, is now an outcast accused of misogyny. How did he get here?
By Lila Shapiro
housewives institute bulletin 10:00 a.m.
New Year, Same Old Housewives As we get ready for the year ahead in Housewifery, the Institute is taking a look at the state of the union.
meat deets Yesterday at 11:03 p.m.
The Yellowjackets Showrunners Clarify Season One’s Many Mysteries Ashley Lyle and Bart Nickerson on Jackie’s journals, Taissa’s eyes, and whether [redacted] is really dead.
overnights Yesterday at 11:00 p.m.
Yellowjackets Season-Finale Recap: Searching for Answers That Don’t Exist A delightfully shocking season finale unlocks more questions than it answers.
chat room Yesterday at 11:00 p.m.
Ella Purnell on Surviving Yellowjackets As ‘Queen Bee’ Jackie “When she doesn’t pull her weight in the group, that would piss anyone off. That would piss me off!”
spoilers Yesterday at 11:00 p.m.
Where Does Yellowjackets Go Next? Until season two arrives, let’s consider what that finale has left us buzz-buzzing about.
overnights Yesterday at 10:35 p.m.
The Righteous Gemstones Recap: The First Cut Is the Deepest What exactly is Eli capable of? The truth is horrifying.
cancellations Yesterday at 10:33 p.m.
FX Cancels Y: The Last Man Showrunner Eliza Clark has hope that the show will find a new home.
overnights Yesterday at 10:30 p.m.
The Real Housewives of Salt Lake City Recap: We’re Walking a Razor’s Edge The housewives “bond” as we head towards a “jaw-dropping bombshell.”
overnights Yesterday at 10:00 p.m.
Euphoria Recap: That Was Awkward Euphoria is juggling not one but two love triangles simultaneously.
overnights Yesterday at 10:00 p.m.
All Creatures Great and Small Recap: The Daffodil Ball A magnificent cow and a cantankerous pig!
overnights Yesterday at 9:03 p.m.
Power Book II: Ghost Recap: No Loose Ends Arguments and hard lessons galore.
blabbermouths Yesterday at 9:01 p.m.
Is Brian Cox Allowed to Be Saying All This? L-to-the-O-G off, Brian.
feuds Yesterday at 6:43 p.m.
Jonah Hill Ends Longstanding Feud With Baby Yoda Our long national nightmare is over.
family feuds Yesterday at 4:00 p.m.
Oops … Britney and Jamie Lynn Spears Are Fighting Again Britney brought their argument over Jamie Lynn’s memoir into day two.
🐝 buzz buzz 🐝 Yesterday at 3:58 p.m.
‘You Can Write Those Kinds of Dynamics Forever’ Showtime’s president of entertainment on setting up the series for success, its multi-season plan, and when to expect the next installment.
overnights Yesterday at 2:19 p.m.
Saturday Night Live Recap: Ariana DeBose Gives the Season a Jolt Ariana DeBose has tremendous chemistry with the cast and gives one of the season’s best performances.
More Stories