In our recap-dominated landscape, television shows tend to be judged primarily on their plot and dialogue, but TV is by its very nature — and name — a highly visual medium. Luckily, there’s no shortage of intensely cinematic experiences to be found around the dial. Here are my five favorite examples of visual wizardry from the past year.

5. The Americans: Gregory escorts Joyce Ramirez away from FBI agents, through a pet shop.
Episode: “Gregory”
Director: Thomas Schlamme
Cinematographer: Richard Rutkowski
The Americans has a knack for lacing sly visual jokes, and even metaphors, into throwaway shots. The third episode of the first season contains my favorite: radical turned KGB operative Gregory (Derek Luke) spirits the wife of a dead KGB agent away from federal agents by sneaking her through the front door of a pet shop and then out the back. The shot starts with them entering the store, swings left as they exit through the back, and then settles for half a second on a bird in a cage, which describes Joyce on two levels: as a “bird” (that is, a young woman) and as a potential canary or stool pigeon. 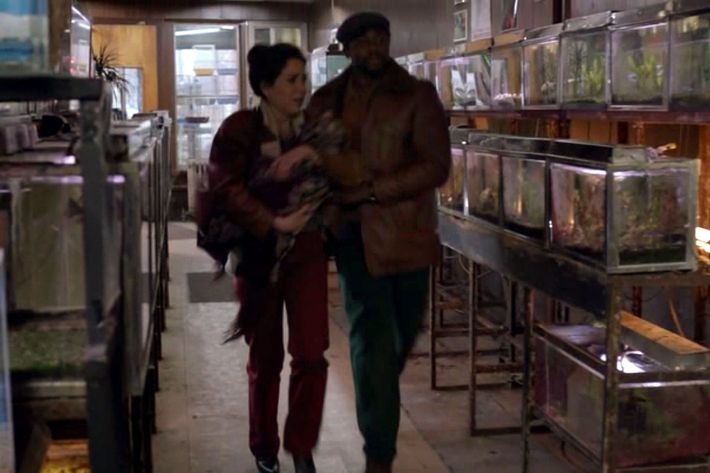 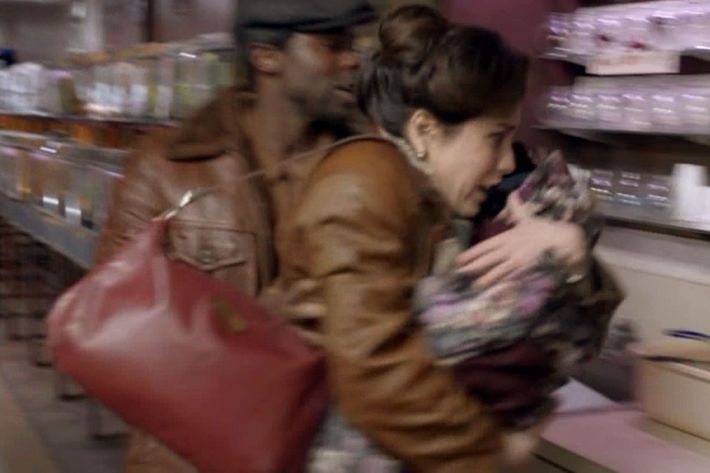 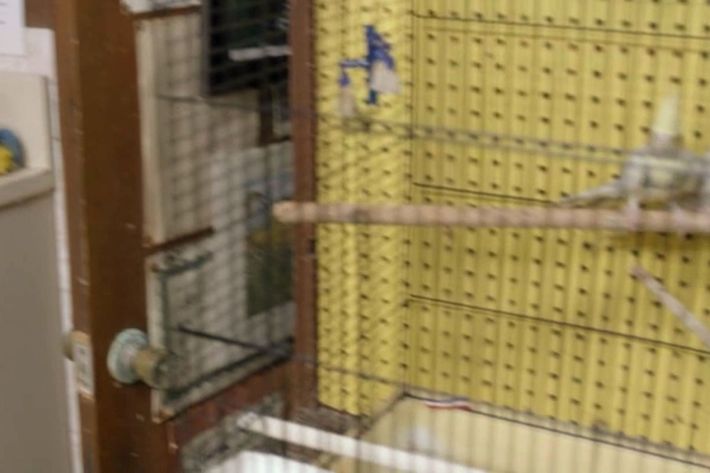 4. The Office: A crying Pam reaches out to the camera crew.
Episode: “Customer Loyalty”
Director: Kelly Cantley
Cinematographer: Randall Einhorn
You knew something was a little odd when Pam (Jenna Fischer) ended a phone argument with Jim (John Kraszinski) by weeping into her hands, then looking off-camera at somebody we couldn’t see. Then came a cut to a slightly different angle, focusing on Pam as she gestured to a boom operator, Brian, who was revealed in a whip pan. This was the first time in the show’s nine-season run that a member of the camera crew had spoken, which until now had begun to seem like an existential running gag, an unseen presence that was more a comedic conceit than a reality. Because of its content, this shot was the most visually startling moment in the whole run of the show, but the shock was amplified because it was enclosed within a variation of one of The Office’s workhorse camera moves. Only the odd rhythm of the shots and cuts in the scene tipped us off that, this time, something was different; we didn’t know exactly how until the camera settled on Brian. 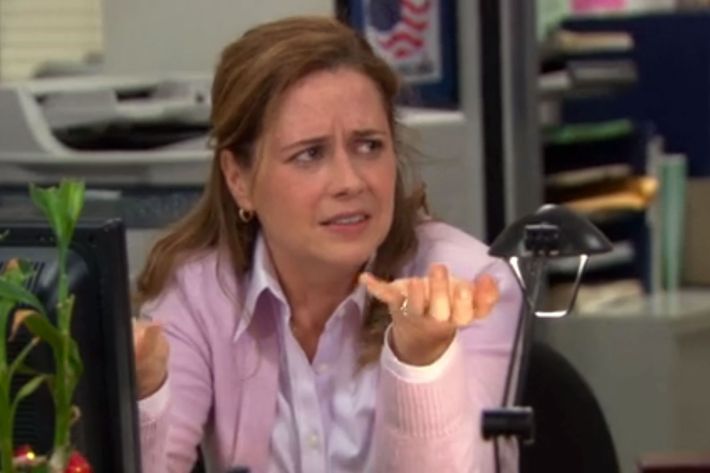 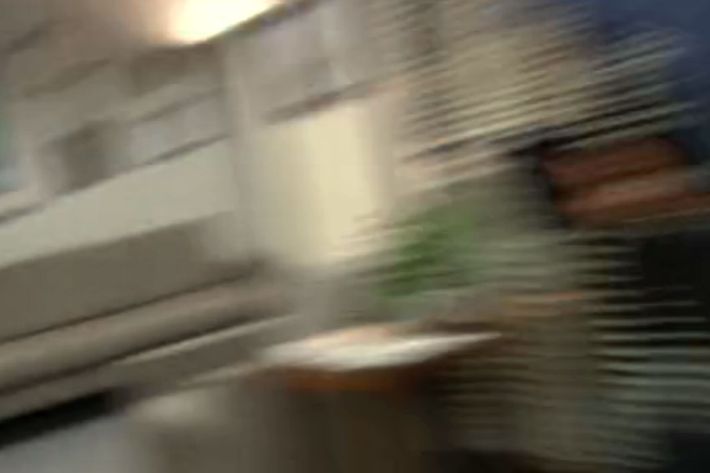 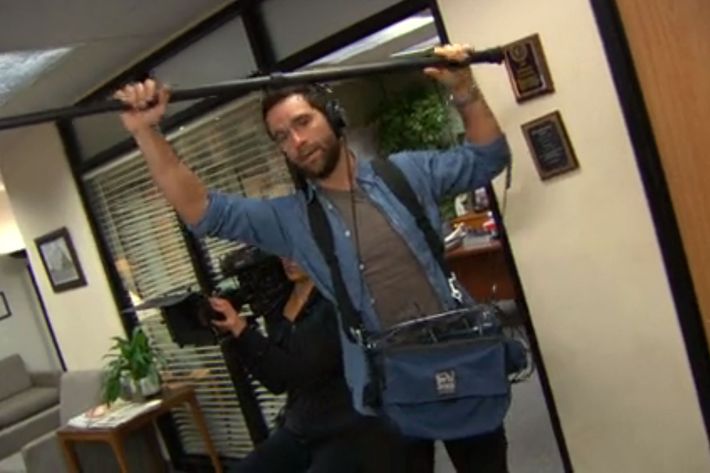 3. Game of Thrones: Catelyn Stark at the end of “The Rains of Castamere.”
Episode: “The Rains of Castamere”
Director: David Nutter
Cinematographer: Robert McLachlan
A devastating end to a brutal episode: Lady Catelyn Stark (Michelle Fairley), somehow still standing at the Red Wedding, offs the treacherous king’s young bride and then stands mute with horror, dead emotionally long before a goon slits her throat and lets her drop out of sight, leaving the frame empty. That empty frame sums up the aftermath of this literally killer installment: They’re all gone. 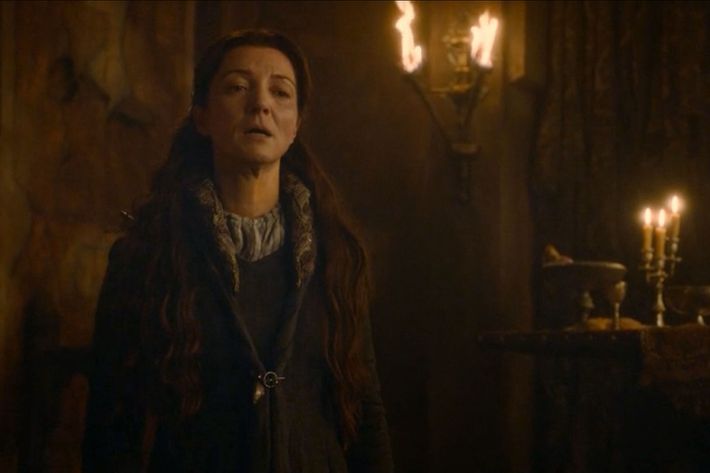 2. Justified: Boyd Crowder, verbal gunslinger.
Episode: “Outlaws”
Director: John Dahl
Cinematographer: Francis Kenny
This shot distills the FX drama’s five-season run down to one image. It’s a twist on the gunfighter facing down enemies at high noon on a dusty street: Walton Goggins’s Boyd Crowder taking on local power brokers who think they own him, only this time the action occurs in a cramped saloon. I love this shot so much I put it at the center of a piece on great TV direction. If the phrase “modern western” ever gets added to the dictionary, this should be the illustration. 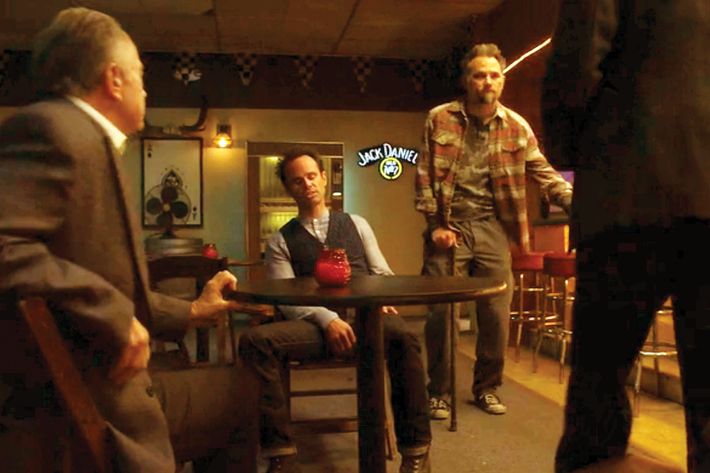 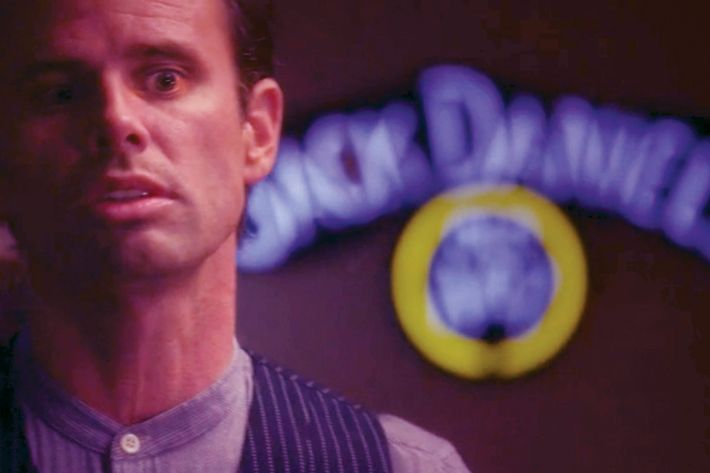 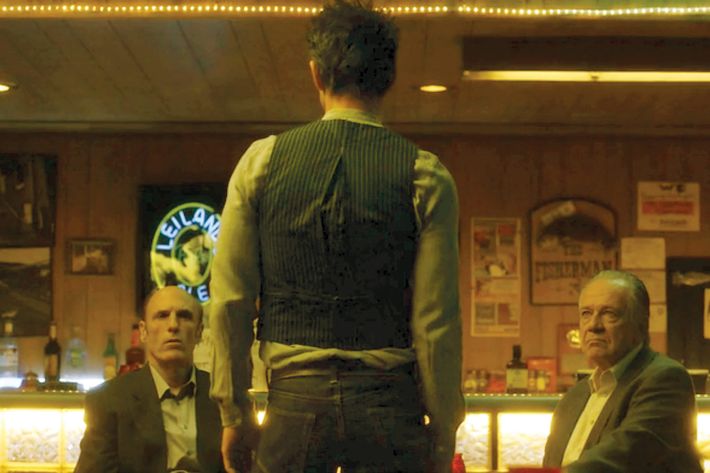 1. Louie: Louie communicates with a Beijing stranger.
Episode: “New Year’s Eve”
Director: Louis C.K.
Cinematographer: Paul Koestner
About two-thirds of the way through the sublime third-season finale of Louie — which I wrote about here — the hero (Louis C.K.), having flown to China in hopes of seeing the Yangtze River, is wandering through the streets of Beijing, asking for directions, when he stops and trades gestures with a stranger on the street. It’s a nonverbal improv moment. The gestures look faintly like tai chi exercises, but they’re just the sort of mirroring gestures that a child (in this case, our Yank hero) would make to an adult who’s trying to teach him to communicate. It’s that rarity in a scripted series: a moment that feels truly spontaneous. The second half of this episode blurs the line between scripted comedy and quasi-documentary improvisation, but this one shot, which lasts about 30 seconds and is mainly concerned with capturing a moment without editorializing it to death, takes the cake. It’s impossible to watch it without feeling a little bit better about our species. 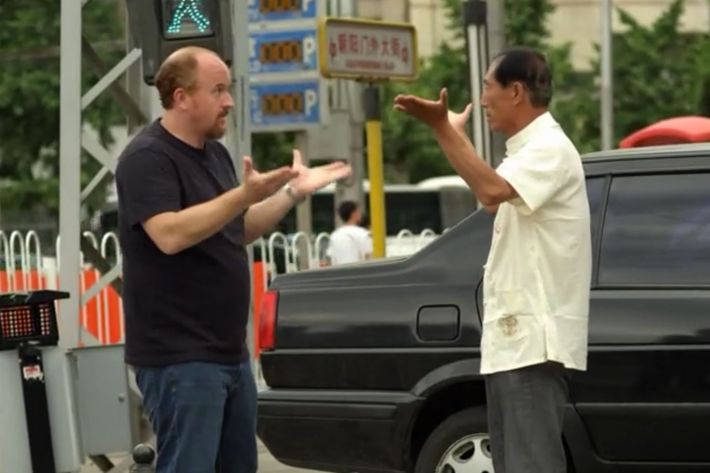 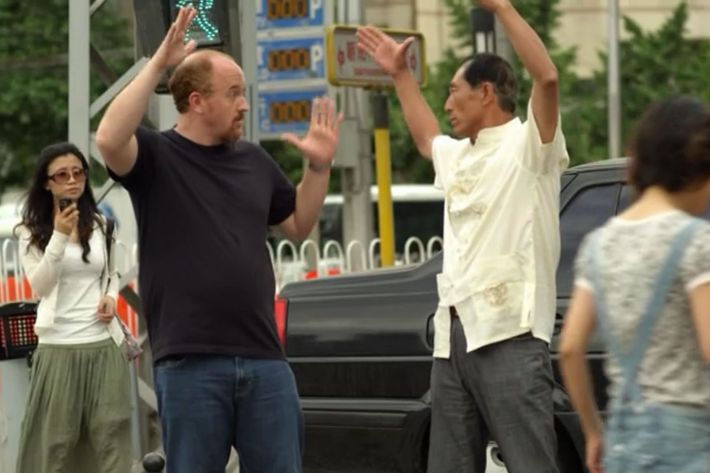 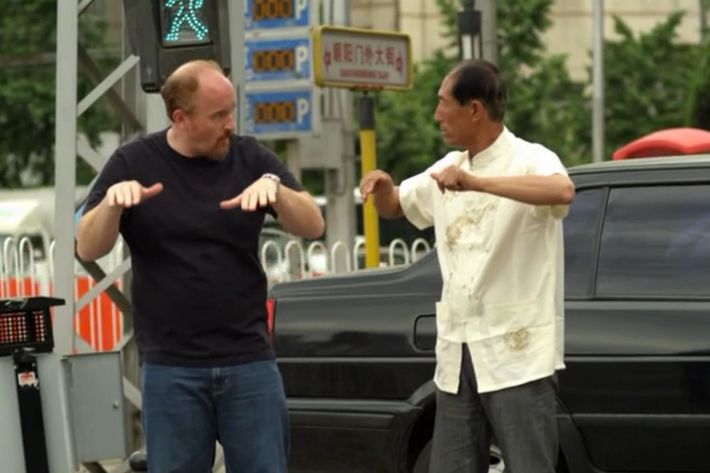 movie review 4 mins ago
Emily the Criminal Isn’t Interested in Empathy Aubrey Plaza is great as a woman caught between crushing loans and a felony record who embarks on a surprisingly gritty criminal side hustle.
By Alison Willmore
role call 18 mins ago
Kate Bosworth Answers Every Question We Have About Blue Crush On competing for the lead role with Jessica Biel, eating sand during her audition, and surviving the “cruel” streak of the early 2000s.
By Ilana Kaplan
qu'est-ce que c'est? 8:00 a.m.
When Wet Leg Met Wet Leg Superfan David Byrne The breakout indie-rock duo and former Talking Heads frontman discuss the perils of fame, the genius of “Psycho Killer,” and being specks of dust.
the grub street diet 6:00 a.m.
L Morgan Lee Searches for the Joy in Dinner “I had my first bite and felt my spirit start to stir.”
By Zach Schiffman
last night on late night 12:59 a.m.
Watch Megan Thee Stallion Write Some Thank-You Notes With Jimmy Fallon As part of her guest hosting gig on The Tonight Show.
my single is dropping 12:21 a.m.
Nicki Minaj’s New TikTok-Fave Single, ‘Super Freaky Girl,’ Is Out She’s all right.
new music friday 12:01 a.m.
Megan Thee Stallion Drops Traumazine Early As a ‘Plan B’ No complaints here.
accidents Yesterday at 11:48 p.m.
Anne Heche Is Not Expected to Survive After Car-Crash Brain Injury She is currently being kept on life support to determine if her organs are viable for donation.
overnights Yesterday at 10:40 p.m.
Pretty Little Liars: Original Sin Recap: Leave It All on the Floor The girls are having confabs, chasing down bonkers leads, and kissing crushes in Original Sin’s strongest episode to date.
tweet then delete Yesterday at 9:34 p.m.
Michelle Branch Announces Her Separation From Black Keys’ Patrick Carney “The rug has been completely pulled from underneath me and now I must figure out how to move forward,” said Branch.
overnights Yesterday at 9:00 p.m.
Southern Charm Recap: Puppy Love Austen is sad because his own antics have caught up with him.
overnights Yesterday at 9:00 p.m.
Rap Sh!t Recap: Catching Flights, Not Feelings The triumphant NYC trip doesn’t go as planned.
accidents Yesterday at 8:05 p.m.
Anne Heche in a Coma, Under DUI Investigation, Following Car Crash According to a representative, she has remained in a coma since shortly after the accident.
we bought a zoo Yesterday at 6:53 p.m.
Would You Still Love Jessica Chastain If She Were a Worm? Oscar Isaac compared his and Chastain’s chemistry to flatworm cells, obviously.
"not this" -a Yesterday at 6:36 p.m.
Um, the PLL: Original Sin Producers Say It ‘Exists in’ the Riverdale Universe Why? lol
objection! Yesterday at 6:30 p.m.
The Aretha Franklin Documentary Producer Is Suing Neon ‘Amazing Grace’ took 40+ years to come out, only to be buried, per the lawsuit.
all hail Yesterday at 6:00 p.m.
Brandy’s Cinderella to Air on ABC, No Streaming Subscription Required Bibbidi-bobbidi over to broadcast television for a reunion special on August 23.
courthouse hottie Yesterday at 4:03 p.m.
What’s Up With Megan Thee Stallion’s Messy Label Legal Battle? Thee Hot Girl hinted that 1501 Certified could be behind the Traumazine leaks.
last night on late night Yesterday at 3:32 p.m.
J. Smith-Cameron Should Have Thrown Two Drinks in Kieran Culkin’s Face She employed a three-strike rule.
overnights Yesterday at 3:08 p.m.
Harley Quinn Recap: Swamp Cling It’s not easy being green … or, in Ivy’s case, accessing the green.
More Stories